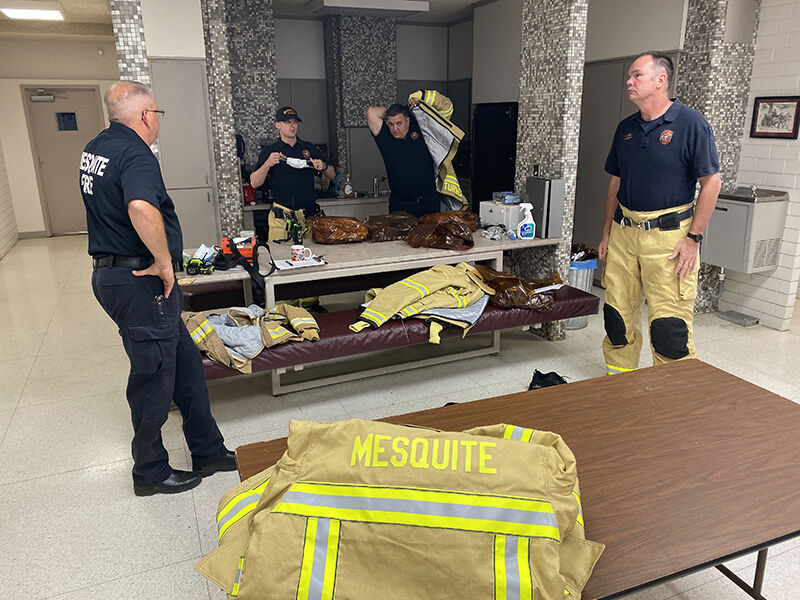 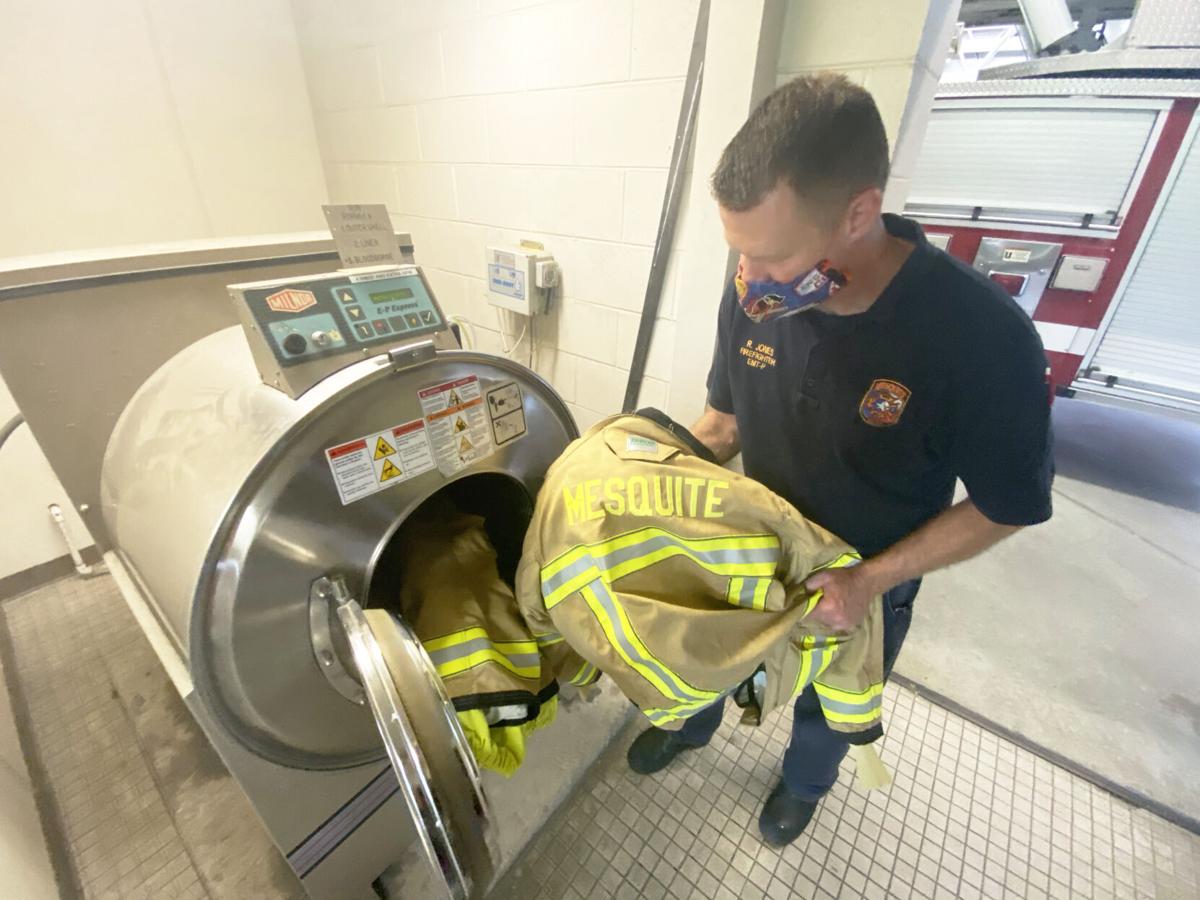 Firefighting is a dangerous profession, and the city of Mesquite continues to do all it can to protect its firefighters with additional equipment, improved operations, and new facilities. From medical calls, to responding to major vehicle accidents on community streets and five major highways, to structure fires and incidents at industrial plants, the Mesquite Fire Department responded to 18,817 calls for service in 2019.  On each call, firefighters put themselves at risk, which can include physical danger, but also exposure to environmental hazards.

Statistics and studies confirm the dangers firefighters face while on duty, specifically exposure to carcinogens, or cancer-causing agents, often found in synthetic and plastic materials used in building materials and furnishings. The National Fire Protection Association (NFPA) cites a growing body of research and data that underscores the contribution of job-related exposures to the development of chronic conditions and illnesses, including cancer.

According to the NFPA, the National Institute for Occupational Safety and Health (NIOSH) undertook two large studies focused on firefighter cancer and concluded that firefighters face a nine percent increase in cancer diagnoses, and a 14 percent increase in cancer-related deaths, compared to the average person in the United States. The NFPA is considered the leader in the fire profession for creating codes and standards for the backbone of fire operations and firefighter health and safety.

With NFPA standards and best practices in mind, during the past two years, Mesquite has invested more than $400,000 in a focused cancer prevention initiative to improve the health and safety of its firefighters.

“The protection of our firefighters is essential. They must know that they have the best possible equipment and training available to perform their job. Today, firefighters have a higher rate of cancer than the average citizen due to the dangers of their job. Mesquite is doing everything it can to reduce those dangers,” said Mesquite Fire Chief Mark Kerby.

In 2018, Mesquite began a strategic and comprehensive program to improve firefighter health and safety. A key component of this program was purchasing back-up bunker gear so that every firefighter has two sets for every 24-hour shift. As of this summer, every Mesquite firefighter assigned to an operational position has been provided a second set of bunker gear that is sized specifically for them. If one set of gear is worn in a fire during the shift, they can use their second set of gear while it is being cleaned, reducing their exposure to the carcinogens encountered at the earlier fire scene. Each of the city’s seven fire stations now has a specialized industrial laundry machine (extractor), uniquely engineered to remove the cancer-causing carcinogens from bunker gear. A fire captain oversees the delivery and fitting of each set of bunker gear and is present to provide guidance on its proper use and maintenance.  As gear is replaced in the department, new sets are purchased that have been designed with additional flaps and coverings to offer elevated protection from carcinogens. The personalized attention to detail and updated bunker gear assures each Mesquite firefighter has gear that both fits properly and provides a greater degree of protection than in years past.

The city’s efforts to keep firefighters safe from exposure to carcinogens does not stop with cleaning bunker gear. In 2020, Mesquite became one of three municipal fire departments in Texas to acquire a SOLO Rescue Decon Washer to clean SCBA (self-contained breathing apparatus) equipment for every firefighter involved in a fire incident. This machine allows for more thorough, efficient and safe cleaning of SCBAs than could be achieved through cleaning the SCBAs by hand, and it can also be used to clean additional firefighting equipment. This includes the boots, helmets and gloves worn by each firefighter. The department has trained technicians on staff to operate the cleaning machine, as well as to maintain all department SCBAs.

Additionally, Mesquite’s fire station bays have special exhaust capture and ventilation systems for their vehicles. This equipment attaches to the exhaust pipes of the department’s trucks, engines and ambulances. It allows for the proper and safe collecting and venting cancer-causing vehicle fumes away from the firefighters in the enclosed areas as they leave the station and return from incidents.

“Firefighters encounter carcinogens through diesel exhaust in the station bays and from various chemical compounds released during combustion from building materials and contents during firefighting operations. These carcinogens can be inhaled or absorbed through the skin. Having back up protective equipment, clean self-contained breathing apparatus, and special facilities helps lessens the exposure to these toxic chemicals,” Kerby explained.

Mesquite’s senior leadership and City Council have enthusiastically supported this program from the moment it was presented by Kerby. The City Council has invested in additional resources, equipment and facilities to keep Mesquite firefighters safe. They budgeted about $260,000 for 119 sets of new bunker gear, invested $110,000 to install bunker gear extractors in all fire stations, and bought the SCBA cleaner for $30,000. Additionally, the city planned for additional layers of safety when they built a new fire station.

New Fire Station #4, which was opened this year, was constructed on a budget of $5.8 million and includes major innovations and enhanced safety and health amenities for the firefighters. The 13,989 square-foot station replaces the 4,500 square-foot former station, built in 1963. The new facility features specially designed air-lock entry areas that prevent carcinogens from entering the living quarters from the station bay. This passageway from the firefighting equipment to the areas where the firefighters eat and sleep is essential, providing an extra level of protection for them and visiting family members as well as other guests in the living quarters.  Additionally, the station has special showers located immediately off the bay for firefighters to use if needed, to keep contaminates outside the station living quarters. This showering area compliments the importance of cleaning the carcinogens from the skin of the firefighters, just as the extractors have for cleaning the equipment and exhaust systems have for keeping the immediate vehicle areas clear of the dangerous material in the air. The modern station incorporates enhanced critical safety functionality throughout a beautifully designed building. Designed by Brown Reynolds Watford Architects and constructed by SEDALCO Construction Services, Mesquite Fire Station No. 4 is a wonderful example of placing firefighter health as the top priority when building a municipal fire station.

The Leukemia & Lymphoma Society is at the forefront of the fight to cure cancer. The largest nonprofit dedicated to creating a world without blood cancers states that when materials burn, they release a number of carcinogens including polycyclic aromatic hydrocarbons (PAHs), a group of more than 100 chemicals. Exposure to some PAHs can cause cancer. Kerby shared that many times the firefighters just do not know what type of materials or elements are in a fire or a structure as they arrive on scene. The city of Mesquite’s three-step process of cleaning protective clothing, scrubbing the breathing equipment and reducing exposure to carcinogens and PAHs in its fire station bays and living quarters has placed the Mesquite Fire Department as one the leaders in firefighter safety in Texas.

Kerby, who will retire from the department September 30, praised the entire leadership team who played a huge role in all these new safety measures.

“The city has been a tremendous advocate and champion of the program. They have created an environment and culture that makes the health of our firefighters a top priority. It has helped limit the exposure of our firefighters to the dangers of carcinogens,” he said.

He shared that the two-year timetable to plan, implement and complete the initiative was extraordinary. From building budgets, to building a fire station as well as acquiring the equipment – many employees for several city departments helped make the success of the program a reality.

“Safety innovation is an investment in our people.  Anything we can do to provide a safer work environment for our fire fighters is a benefit to the entire community.  They keep us safe, and we need to keep them safe,” said City Manager Cliff Keheley.