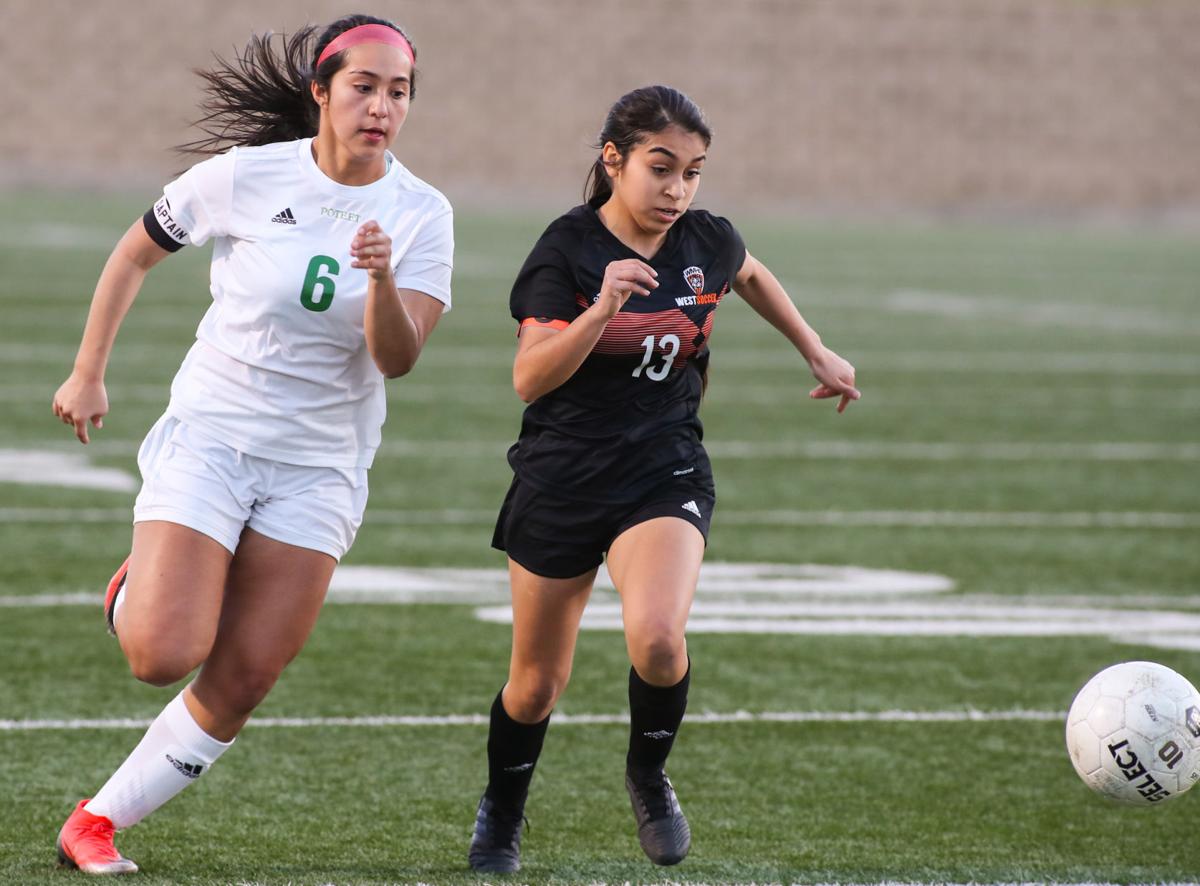 West Mesquite’s Natalie Valadez was named to the 13-5A first team for the second year in a row. 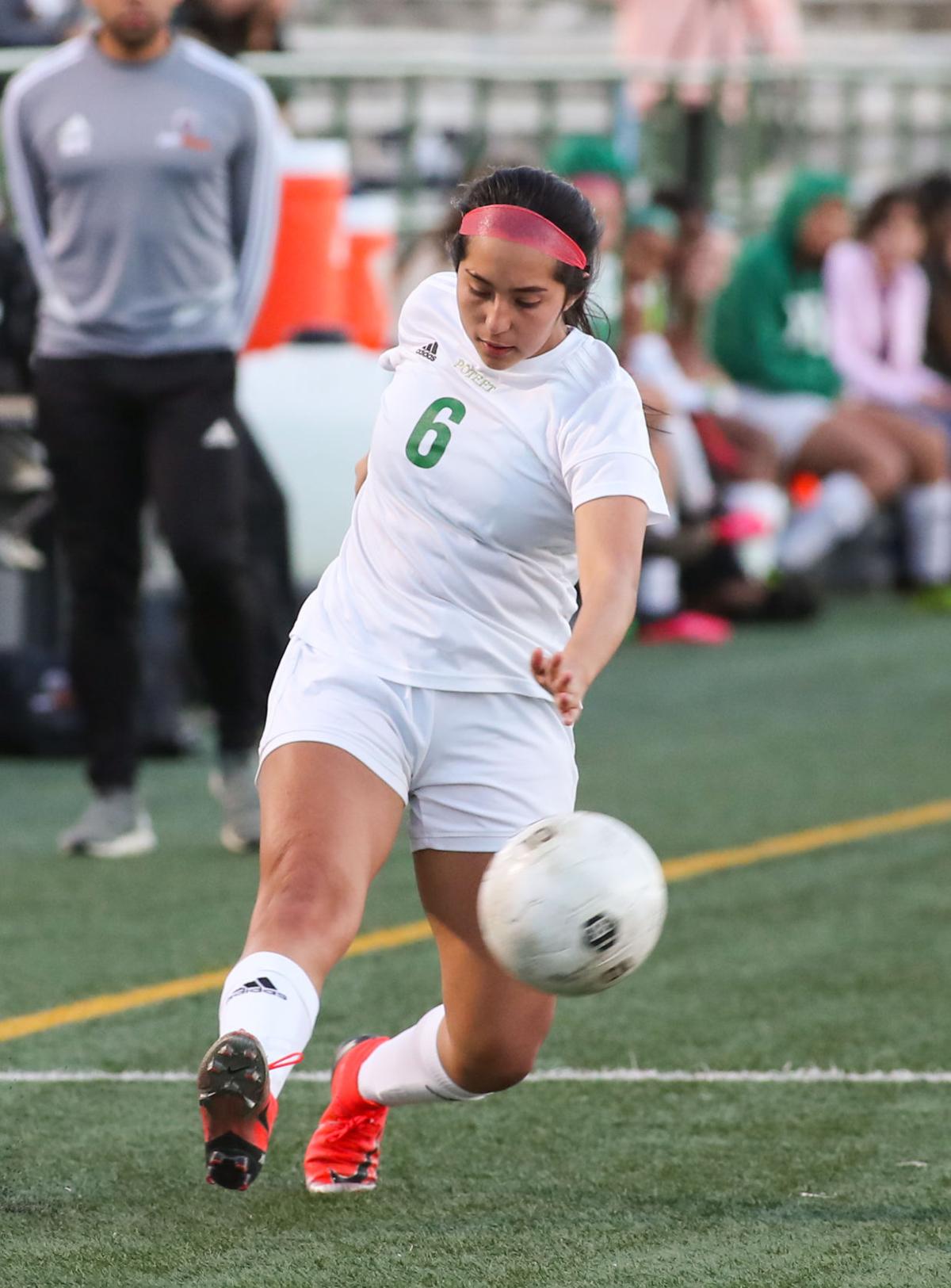 Poteet’s Katia Yerena was one of nine Pirates named to the all-district team.

West Mesquite’s Natalie Valadez was named to the 13-5A first team for the second year in a row.

Poteet’s Katia Yerena was one of nine Pirates named to the all-district team.

Like nearly all soccer district races around the state, there was no closure for 13-5A girls soccer teams due to the cancellation of the season due to the COVID-19 pandemic.

Outside of Forney having wrapped up the outright district championship, the final week of the 13-5A slate was shaping up to be one of the more exciting in the area.

Poteet had already secured its Mesquite ISD-record 24th consecutive playoff berth, there was still work to be done, as the Pirates could finish as high as the second seed or as low as the fourth.

West Mesquite will be wondering what might have been. The Wranglers have only two playoff appearances in program history—the last of which came in 2013—but they had positioned themselves to have a fighting chance to add a third berth to that total in their final two matches.

What might have transpired will never be known, but the teams have tried to carry on as normally as possible in spite of the situation and part of that was selected the all-district team, where both Poteet and West Mesquite were well-represented.

The Pirates had nine players recognized, including five on the first team.

That quintet was headlined by Desiree Navarra, who captured a superlative award when she was voted as the co-offensive player of the year.

Senior Katia Yerena made the list for second straight season and she was joined on the first team by Italy Esparza, Kamille Williams and Ashley Montoya.

Though they trailed Poteet in the standings, West Mesquite actually earned one more spot on the team, including a pair of major honors.

Freshman Itzel Reyes made an immediate impact with a team-best 15 goals and nine assists on her way to being named offensive midfielder of the year.

Sophomore Juliana Martinez also had a standout campaign with seven goals and three assists and was tabbed the utility player of the year.

Valadez was joined by a pair of strong defenders in seniors Valeria Guillen (1 goal) and Isabel Nunez, as well as sophomore midfielder Stephanie Velasquez.

Senior Alyssa Price was tabbed co-most valuable player as one of the most prolific scorers in the area with 27 goals and 21 assists.

Junior Delaney Welch was named co-defensive midfielder of the year, while also adding two goals and a pair of assists.

Junior Zoe Theriot was voted the goalkeeper of the year and senior Tatum Mercer was selected as the defensive player of the year as they helped a stingy Jackrabbit defense that allowed only two goals in 11 district matches and posted nine shutouts.

Trisha Williamson was recognized as the coach of the year as not only did Forney win the district title, they were No. 10 in the Texas Association of Soccer Coaches Class 5A Region 2 poll and No. 12 in the Texas Girls Coaches Association state poll.

Five more Forney players were named to the first team and four of them are expected to return next season with Welch and Theriot. Sophomores forwards Kasey Carter (23 goals, 20 assists) and Chloe Chadwick (21 goals, 21 assists) joined Price as one of the best scoring trios in the state, freshman midfielder Bianca Salazar (12 goals, 4 assists) made an immediate impact and junior defender Megan Wills and senior defender Alex Garza were key parts of the back line.

Terrell, who was also in the thick of the playoff race, also claimed a pair of superlative awards.

Senior Jaelyn Young is the co-offensive player of the year and freshman Josie Mendoza was voted as the co-newcomer of the year along with Lancaster sophomore Sydney Stokes.

Co-Defensive Midfielders of the Year

Co-Defensive Midfielders of the Year