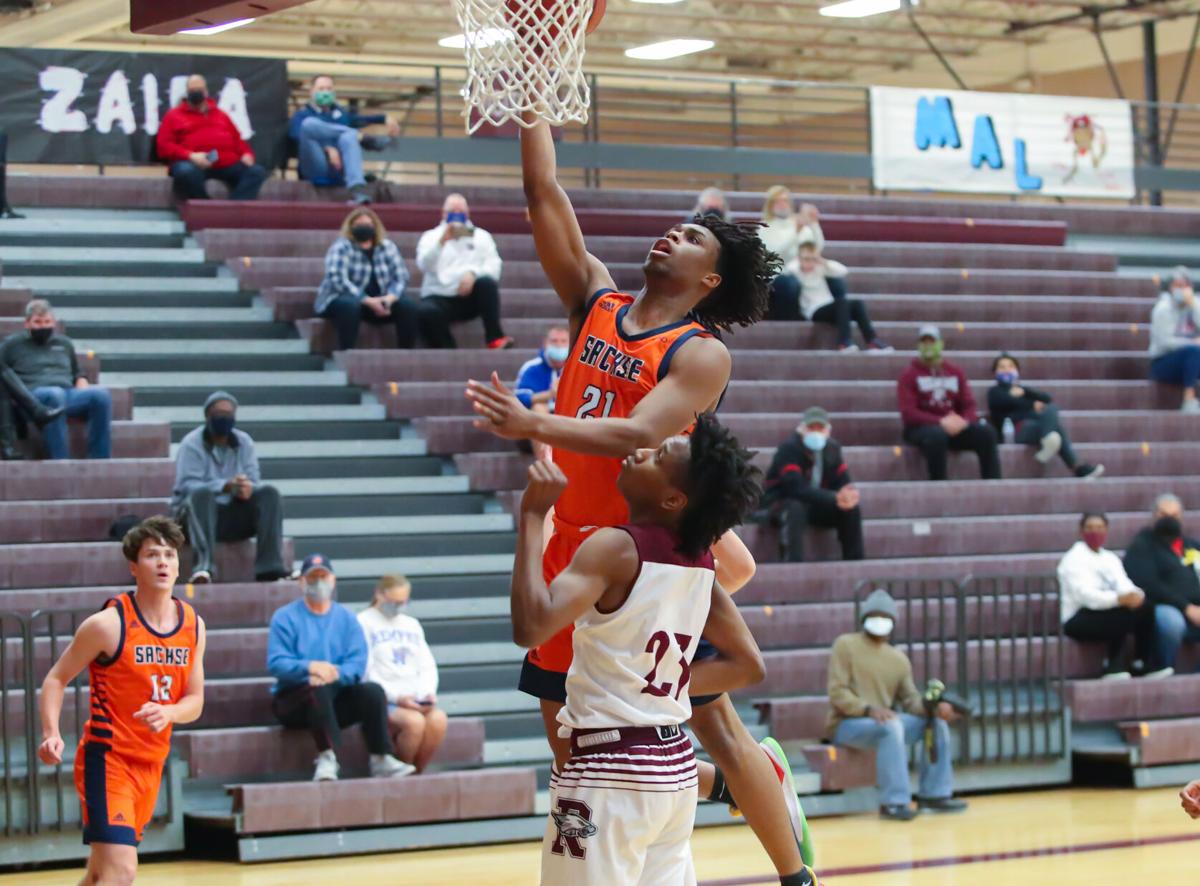 Kelechi Eziagwu and Sachse will take on 10-6A co-champion Tyler Legacy in the opening round of the playoffs later this week. 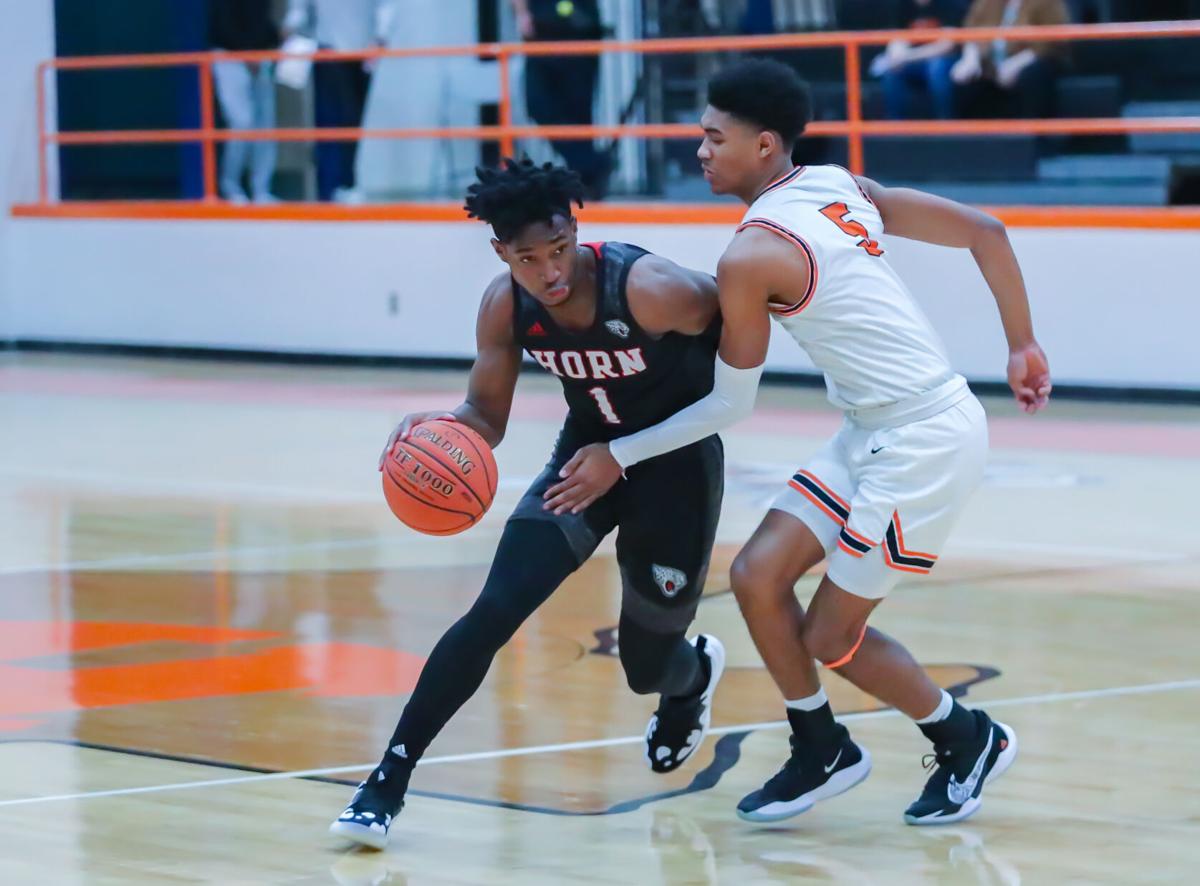 Sean Moning and Horn will be the lone MISD representative in the Class 6A playoffs.

Kelechi Eziagwu and Sachse will take on 10-6A co-champion Tyler Legacy in the opening round of the playoffs later this week.

Sean Moning and Horn will be the lone MISD representative in the Class 6A playoffs.

It would be tough to find two more competitive boys basketball districts in the state than 9-6A and 10-6A, which both saw their races go down to the wire.

The 10-6A field was more top heavy, with Tyler Legacy, Rockwall, Horn and Rockwall-Heath quickly getting distance from the rest of the pack.

Gaining separation from one another, on the other hand, proved more difficult, as no team was able to get out with less than two losses.

When the dust settled, Tyler Legacy (10-2) and Rockwall (10-2) shared the district title, and though they split the season series, the Raiders will be the top seed in the playoffs.

Horn (9-3) had a victory over the Yellowjackets under their belts, but settled for the third seed.

The Hawks (6-6) are a deceiving fourth seed, as they not only knocked off Tyler Legacy, they were in line to make a push higher until a COVID-19 quarantine forced them to forfeit a pair of late games.

Over in 9-6A, there was even more parity from top to bottom, but Garland, Naaman Forest, Wylie and Sachse were able to claim the four spots.

It was by no means easy, as the Owls (11-3) won the district title as a three-loss team, topping the Rangers (10-4) in the season finale on Friday to earn the top seed.

There were 24 district games decided by single digits, with four one-point contests and three overtime affairs.

Fifth-place South Garland (7-6), who only officially had its playoff hopes come to an end after a final-day cancellation due to a positive COVID-19 case, had wins over Garland and Sachse (8-5).

Lakeview (6-8), who placed sixth, posted victories over the Owls and the Rangers, and one of Rowlett’s (2-11) two wins essentially knocked South Garland out of playoff contention a week ago.

Those races produced two quartets of battle-tested teams and should lead to an entertaining round of bi-district games.

The Jaguars have featured some star power over the years, but this season’s squad has leaned more on a committee approach with players such as seniors Tsepo Williams, Nate Lee, Juwan Lewis, Latame Phillips and Denarious Carter and juniors Sean Moning, Bryson Smith, Yai Koinyang and Jordan Williams.

Horn might not have the most flashy overall record, but they have been tested, not only in 10-6A, but in non-district games against state-ranked Duncanville, Mansfield Timberview and Mount Pleasant.

They will take on a Rangers team that was a whisker away from capturing the 9-6A championship.

Junior Autavius Hobbs averages 13.1 points and 3.0 assists per game and is not only one of the best 3-point shooters in the area, he has also delivered in the clutch, as he did with a buzzer-beater in a win over Sachse.

Junior Craylon Craddock (9.8 ppg) is another outside threat, senior Daylen Webb (5.1 ppg, 3.7 rpg) has come on strong and senior Devean Deal (6.3 pg, 6.2 rpg) is one of those players who makes the right plays at the biggest times.

Sachse (11-9) is back in the playoffs for the third season in a row and faces a big challenge in Tyler Legacy (20-3), who has spent much of the season in the state rankings, when they meet at 7 p.m. Saturday at Wills Point.

The Mustangs are led by one of the area’s top scorers in 6-2 senior Dylan McKeon, who is tallying 19.4 points and 4.3 rebounds per game.

Isaac Brown, a 6-4 senior, is another sharp shooter from the outside and Ethan Dunnam gives them another senior presence at forward who can score the ball.

Senior Kelechi Eziagwu and junior Alex Orji are active inside and effective offensive rebounders, senior guard Kai Smith has the potential for big scoring nights and senior Vaydin Maldonado does a little of everything.

The player to watch for the Mustangs could be sophomore R.J. Chatman, who not only runs the offense from his point guard, but can be an explosive scorer with his ability to shoot from the outside and penetrate to the basket.

Outside of the two 10-6A losses, and the one non-district hiccup against Grand Prairie, the Raiders have been perfect in the win/loss column.

The two-time defending district champions are an experienced group led by senior guards and captains Jaylon Spencer and Will Mitchell.

Tyler Legacy has a solid presence in the middle in 6-6 senior Matt Wade and 6-4 senior captain Nate Noland is another factor on the inside.

District champion Garland (17-3) will certainly be the favorite against Rockwall-Heath (10-14), but this might not be the conventional No. 1 vs. No. 4 seed when they meet in the bi-district round at 4:30 p.m. Saturday at Forney High School.

The Hawks feature one of the top scorers in the state with 6-5 senior Chandler Dickinson, who averages 24.3 points, 8.4 rebounds and 3.3 assists per game.

It will be interesting to see how the Hawks respond to the layoff, as it will be more than two weeks since they took the court on Saturday.

That should not be the case for Garland, who had big stakes on the line in its finale last Friday against Naaman Forest and it delivered in a 63-48 victory to earn the 9-6A championship.

The Owls have been a nightmare match-up problem for many teams due to their presence on the inside.

Ugo Ejiofor, a 6-8 senior, gives them a 1-2 punch, as he tallies 10.6 points, 8.1 rebounds and 1.1 blocks per contest and a third brother sophomore Chukes Ejiofor, is also a contributor.

This is actually a rematch of an early-December tilt that saw the Pirates claim a 47-41 victory.

The Pirates, who advanced to the state tournament last season before the event was cancelled due to the pandemic, counter with a pair of dynamic scorers in senior Kobe Wiggins and junior Jordan Hudgins. Senior Kwame Massally and junior Messay Gharbin are other steady contributors, and Wylie has also had other players step up along their way to a playoff berth.