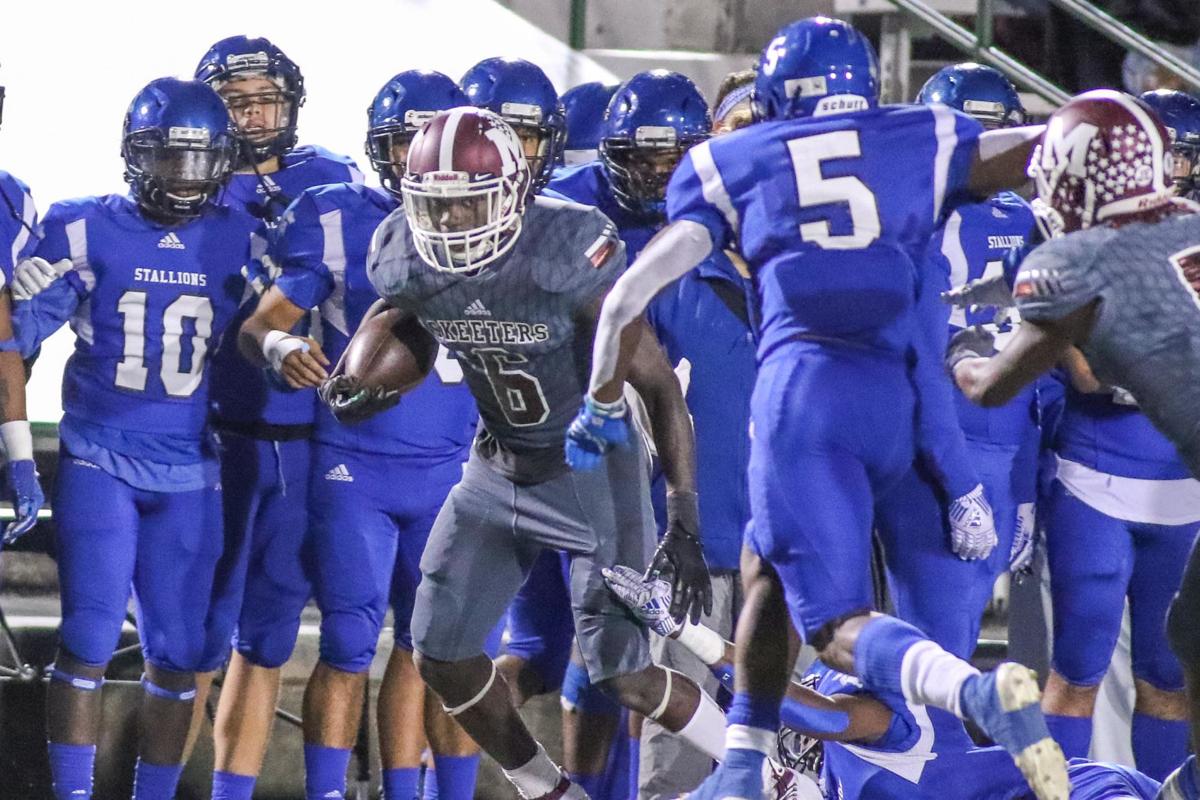 Mesquite’s Ja’Travion Rudd caught the game-winning touchdown pass with seven seconds left as the Skeeters pulled out a 18-14 victory over Tyler Lee on Friday at E.H. Hanby Stadium. 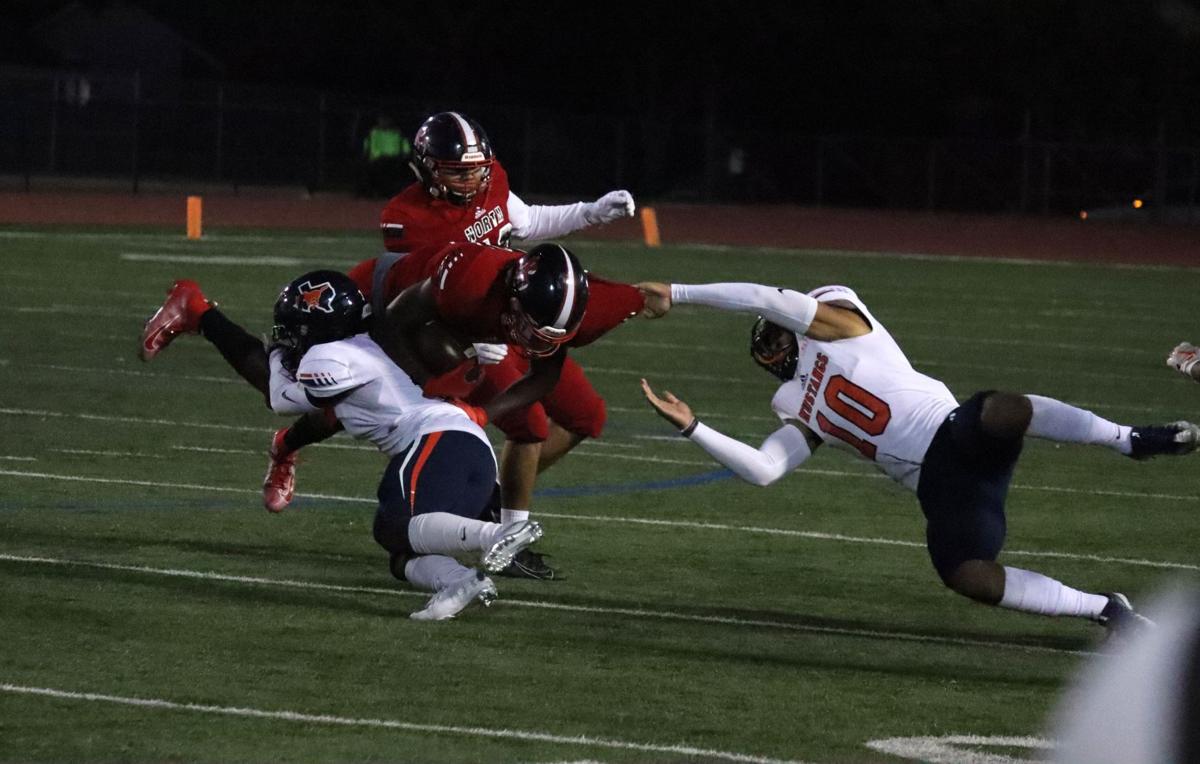 Quinton Williams (No. 10) and the Sachse defense did what it needed in the fourth quarter to help the Mustangs hold on for a 24-21 victory on Friday at Williams Stadium.

Mesquite’s Ja’Travion Rudd caught the game-winning touchdown pass with seven seconds left as the Skeeters pulled out a 18-14 victory over Tyler Lee on Friday at E.H. Hanby Stadium.

Quinton Williams (No. 10) and the Sachse defense did what it needed in the fourth quarter to help the Mustangs hold on for a 24-21 victory on Friday at Williams Stadium.

If Mesquite and Sachse find themselves in the playoffs three weeks from now, they might point back to Friday night as the moment they made it happen.

Both the Skeeters and Mustangs were involved in tight games that could have gone either way, but each made critical plays down the stretch to keep themselves in the thick of the race for not just the playoffs, but for district titles.

Though there were still three games remaining, Mesquite understood the importance of Friday’s 11-6A tilt against Tyler Lee. The Skeeters had already dropped a game to Horn and close the season against powerhouses Rockwall and Longview.

A setback to the Red Raiders and Mesquite would have lost the tiebreakers to two of its primary playoff contenders in Tyler Lee and Horn.

It was not looking good for the Skeeters for much of the night.

The Red Raiders marched down the field and scored a touchdown on the game’s opening drive and they found the end zone again just before halftime.

Mesquite, meanwhile, drove into Tyler Lee territory twice, but were held to a field goal by Danny Castaneda on one possession and fumbled at the 1 on the other to leave them in a 14-3 deficit at the break.

The Skeeters again had a chance in the third quarter, but turned the ball over on downs at the Red Raider 25.

With the score still holding heading to the fourth quarter, Mesquite had to act fast.

Sparked by a fourth-down conversion on a fake punt by Alec Rice, the Skeeters finally got into the end zone on a run by LaDarius Turner and Dylan Hillard-McGill found K.B. Frazier on the two-point attempt to close to within 14-11.

After seeing their next drive stall once again in Red Raider territory, the defense gave Mesquite one final chance with one minute left.

Hillard-McGill hit Ja'Darion Smith for 11 yards and then went back to Frazier for the big play for 41 yards. One play later, Hillard-McGill found Ja’Travion Rudd for a 4-yard touchdown for the game-winning score with just seven seconds left to complete the 18-14 comeback win.

Sachse entered the season having not dropped a district game since 2015, but this year’s road has been more difficult. The Mustangs dropped a 22-21 decision to Wylie in their 10-6A opener, trailed at halftime against Naaman Forest and were in another dogfight against North Garland on Friday.

Sachse led by 10 at halftime, but the Raiders quickly scored twice in the third quarter to take a 21-17 lead. Suddenly, the Mustangs were in danger of falling to 2-2 and losing tiebreakers to a pair of fellow contenders.

The Sachse offense responded quickly, as Parker Wells hooked up with Matthew Herrera for a 46-yard gain and Wells then took it himself nine yards into the end zone to regain the advantage at 24-21.

There was still a quarter-and-a-half to go, though, and the Mustangs had struggled to slow down North Garland running back Sabron Woods all night.

That trend continued, but Sachse made big plays when it needed down the stretch. The Raiders moved to the Mustang 14, but Sachse forced and recovered a fumble. On the next drive, North Garland reached the 7-yard line before stalling. They went for the tie, but Matthew Carter shot through to block the field goal and preserve the lead.

Sachse forced North Garland to turn the ball over on downs on each of its next two possessions to close it out and instead of falling back into the middle of the standings, they find themselves in a tie for first place.

Here are some other highlights from Week 8:

--Poteet moved the ball at will in Friday’s 51-10 win over Wylie East, rolling up 636 yards of total offense. Running back Seth McGowan had his usual night, rushing 13 times for 195 yards and a touchdown and adding a 52-yard reception. The Pirates also have to be encouraged by the passing game. Quarterback Jaylond Police had his best game of the season, completing 15-of-22 passes for 269 yards and three scores. Tristan Golightly was the main target, with seven catches for 109 yards and a touchdown and Devyon Camps also had a 30-yard scoring catch.

--Nevada Community had few answers for the Sunnyvale offense in the Raiders 58-17 victory on Friday. Tripp McAda was 17-of-22 for 379 yards and four touchdowns and he also rushed for a score. Noah McDill had a huge night with 10 receptions for 174 yards and two touchdowns, Max McAda caught four passes for 121 yards and a pair of scores and Will Van Vessem recorded three grabs for 97 yards, highlighted by a 73-yard score.

--The night did not turn out the way Rowlett was hoping in Friday’s 14-13 loss to Wylie, but there were some bright spots. The Eagles have been looking to generate big plays on offense and they did so twice in the passing game as Alex Routt hooked up with Tre’von King for a 43-yard touchdown and Antonio Hull on a 35-yard scoring strike.

--There was not much to smile about for North Mesquite in Friday’s 76-7 loss to Rockwall, but one positive was sophomore running back Kobie Norman, who had 16 carries for 102 yards and a 58-yard touchdown run.

--Dallas Christian relied on its ground attack in Friday’s 35-29 double-overtime win over San Antonio Cornerstone. Quarterback Zack Haaland was the catalyst, with 20 carries for 181 yards and four touchdowns, while TJ King added eight attempts for 48 yards and a score.

--Poteet gave up a 95-yard touchdown in the first quarter, but slammed the door on Wylie East from that point, giving up just three points. Jalen Updite and Nicholas Deville led the way with 11 tackles and one TFL each. Brenton Hamilton had 10 tackles, Stephen Kirk recorded nine stops and Jahmad Jackson and Cody Anderson each added eight tackles.

--The Sunnyvale defense swarmed Nevada Community on Friday, holding them to 160 yards and surrendering only a pair of late touchdowns after the score was already 58-3. Devin Sterling recorded 12 tackles, with two for loss, Jake Taylor had 11 stops, with three behind the line of scrimmage, and Hudson Smith and Zachary Bartis each added eight tackles. In all, the Raiders finished with 15 tackles for loss.

--Dallas Christian junior TJ King had a monster game against San Antonio Cornerstone with 21 tackles, including six for loss, and a forced fumble. Kynan Gilreath and Sam Johnson also had nine stops each for the Chargers.

--The Rowlett defense did its part to give the team a chance against Wylie on Friday. The Eagles held the Pirates to just 176 total yards, with only nine through the air.

--Sachse gave up its share of yards against North Garland, but rose to the occasion when needed. Scotty Jesmer recorded seven tackles, two for loss, and a pass breakup and Kori Jones added five stops.