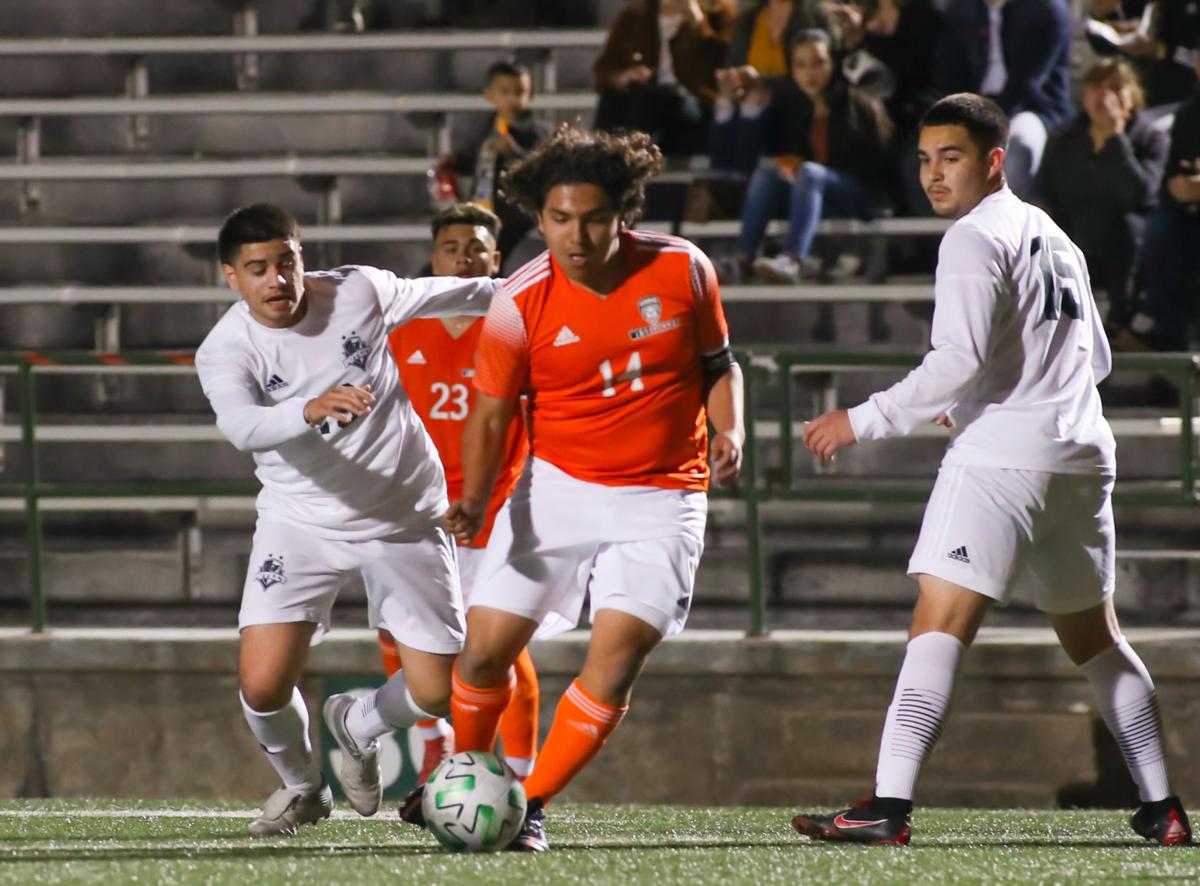 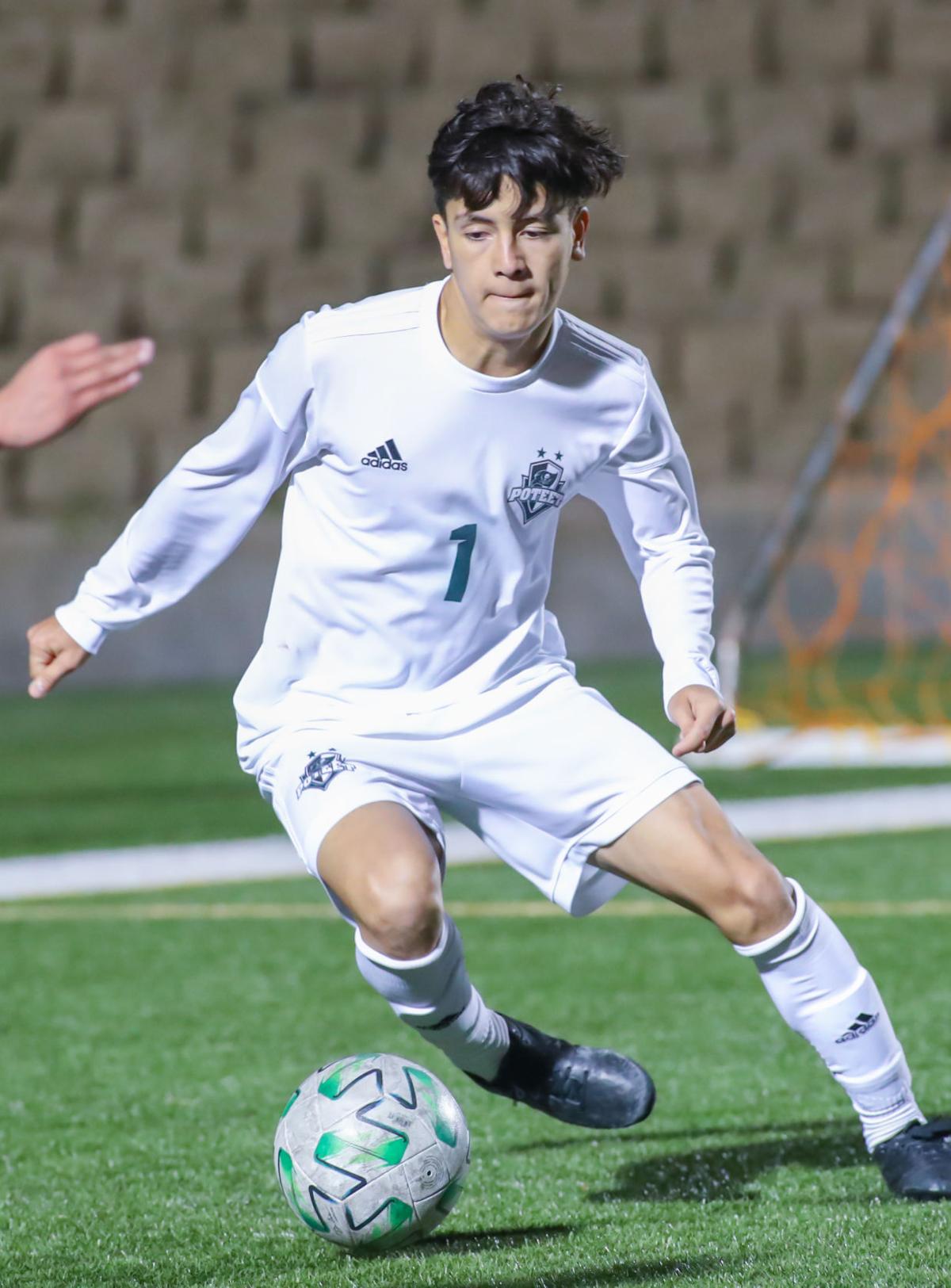 Poteet senior Allan Mendez was named to the 13-5A first team.

Poteet senior Allan Mendez was named to the 13-5A first team.

West Mesquite was the class of 13-5A boys soccer this season.

With one week left in the regular season, every team had at least two district losses with the exception of the Wranglers, who did not have a regulation blemish.

West Mesquite had already secured the outright 13-5A title for the second straight season and had high hopes for what was ahead in the playoffs.

Alas, like all teams around the state, the Wranglers were left wondering what might have been when the COVID-19 pandemic resulted in the remainder of the season being cancelled.

Despite the unprecedented circumstances, high school sports has tried to move on where it can and one of those ways in with the selection of the all-district team, which saw West Mesquite and Poteet well-represented.

As expected, the Wranglers led the charge with 15 selections, including five superlative awards.

Senior Junior Saavedra was named to the first team for the third consecutive season and captured his second major honor when he was voted as the 13-5A most valuable player.

After capturing offensive player of the year a season ago, Saavedra turned in another standout campaign, posting a team-high 17 goals to go along with nine assists.

Junior Noberto Flores was tabbed the defensive player of the year. Flores led a stingy Wrangler defense that held opponents to one goal or less in nine of their 10 district matches.

Senior Jarius Robledo earned defensive midfielder of the year for the second straight season. In addition to his work on the back end, Robledo also accounted for six goals and three assists.

Senior Elliot Mendoza was chosen as the co-newcomer of the year, making an instant splash with three goals and three assists.

Jeremiah Villarreal was named coach of the year for second year in a row, guiding West Mesquite to back-to-back district championships and a No. 4 ranking in the Texas Association of Soccer Coaches Class 5A Region 2 poll.

The Wranglers placed five more players on the first team.

Senior forward Jesse Velasquez registered 12 goals and 10 assists and senior midfielder Edgar Lopez had 10 goals and a team-high 12 assists to help lead Saavedra and the offense.

Rounding out the selections was senior Carlos Lara, last season’s district most valuable player who battled injury issues this year.

Poteet was poised to officially wrap up its playoff berth during the final week and its efforts were also recognized with 10 honorees.

That included two superlative awards with senior Matthew Sierra being named goalkeeper of the year and freshman Jose Granados tabbed co-newcomer of the year.

Sierra and the Pirate defense ramped up their efforts in district, posting four shutouts and holding opponents to just one goal in four other matches. Granados stepped in immediately with three goals and a pair of assists.

Granados was one of three freshmen who made a big splash, as defender Refugio Robles made the first team and midfielder Esdras Juarez was a second-team pick.

Two of the Pirates’ biggest offensive weapons made the second team.

Forney, who was in second place at season’s end, earned a pair of superlative awards as senior Angel Ramirez was voted the offensive player of the year and freshman Carlos Saldana was tabbed co-newcomer of the year.

Rounding out the major awards, North Forney junior Andrew Mendoza is the offensive midfielder of the year and Terrell senior Octavio Valdes was named utility player of the year.

Defensive Midfielder of the Year

Defensive Midfielder of the Year