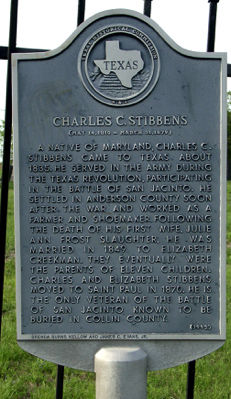 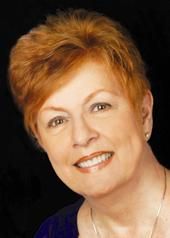 Charles C. Stibbens was born 14 May 1810 in Pipe Creek, then Baltimore County, Maryland.  He was literate and had an excellent command of the English language and an eloquent penman­ship, evident in his many surviving letters. He arrived in Texas with the first volunteer company which he himself had organized and financed to support the Lone Star Republic. He was a soldier in the Texas Revolution at the commencement at Gonzales in 1835. He served until the first day of January 1837. Charles C. Stibbens and his volunteers formed the First Volun­teers, Company "I". His service record, number 496, shows he was in Major Leander Smith's company at muster on April 5 1836. Furthermore, he served from April 20 to

June 22, 1836 in Captain William S. Fisher's company of Velasco Blues at San Jacinto.  Stibbens, number 22, is on the muster roll of Company I, First Regiment of Volunteers under the command of Col. Millard. His name is engraved on the original 1939 bronze plaque at the San Jacinto Monu­ment. His name also appears in, The Honor Roll of the Battle, A Complete List of Participants and Personnel on Detached Service.

I have readers and friends who contact me every day telling me their frustrating experience with Ancestry’s aDNA. We must understand that the DNA is only reporting a person who’s DNA links to yours. It links only to him or her only. It does not link you to their spouse’s DNA unless that spouse’s DNA is in the database. If it is, it will announce to you that your DNA links to ‘Jane Doe’ or to John Doe’. It does not mean that you have a link to any of his or her spouses. You have to wait until someone with the spouse’s DNA link is announced.

If it throws you over into a tree, that tree is suggested to you because your DNA links to a person in that tree such as Jane Doe. All people in that tree must be personally researched. If the tree has sources, then each source must be searched individually. People make mistakes. People also add incorrect sources.

I have found one tree that has sources that link me to someone in their tree. I followed the sources given. The chapter and page number in that book do not list that ‘Revolutionary War’ vet’s name, nor does any page have his name listed on it after checking the book’s index.

Brenda Kellow has a bachelor's degree in history, teaches, and lectures on genealogy. Before retiring to publish her family’s histories in 2007, Brenda held certification as a Certified Genealogist and as a Genealogical Instructor. Send reunion announcements, books to review, and genealogy queries to: bbkellow@verizon.net.