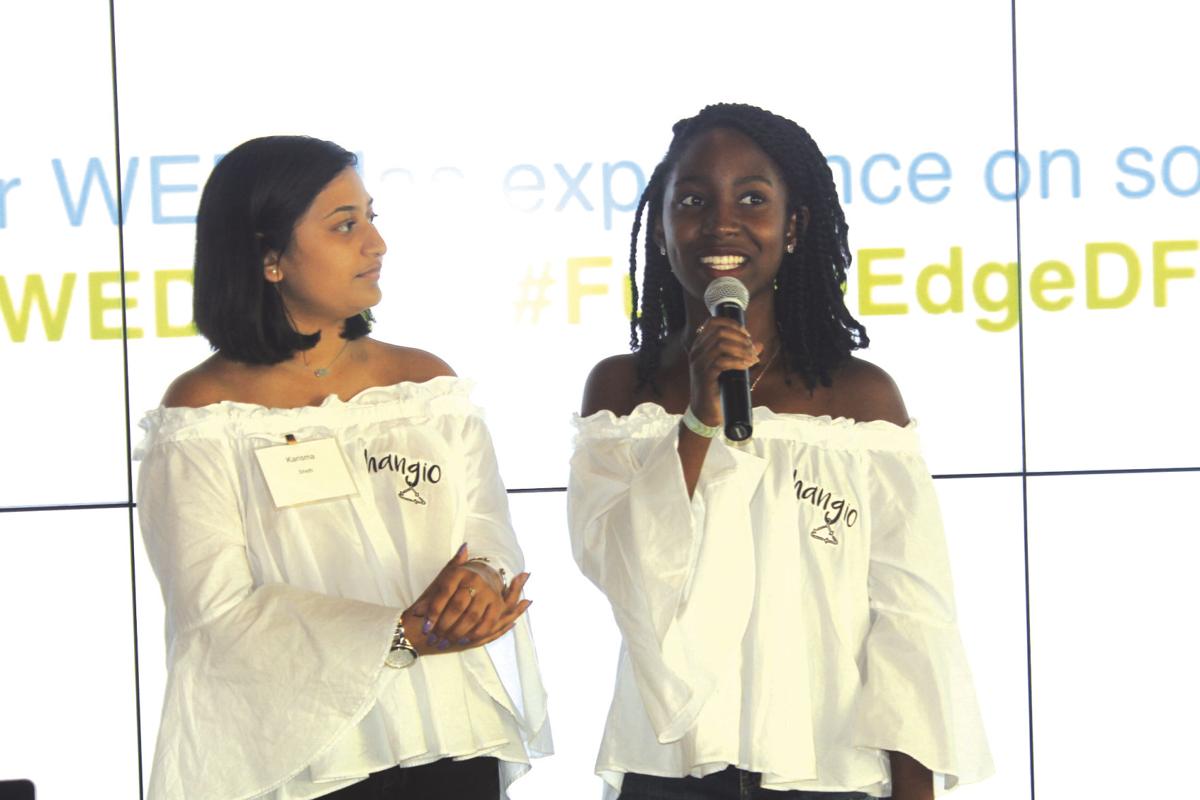 Karisma Sheth and Ayodele Aigbe, co-creators of Hangio, describe their invention that they hope can redefine closets. 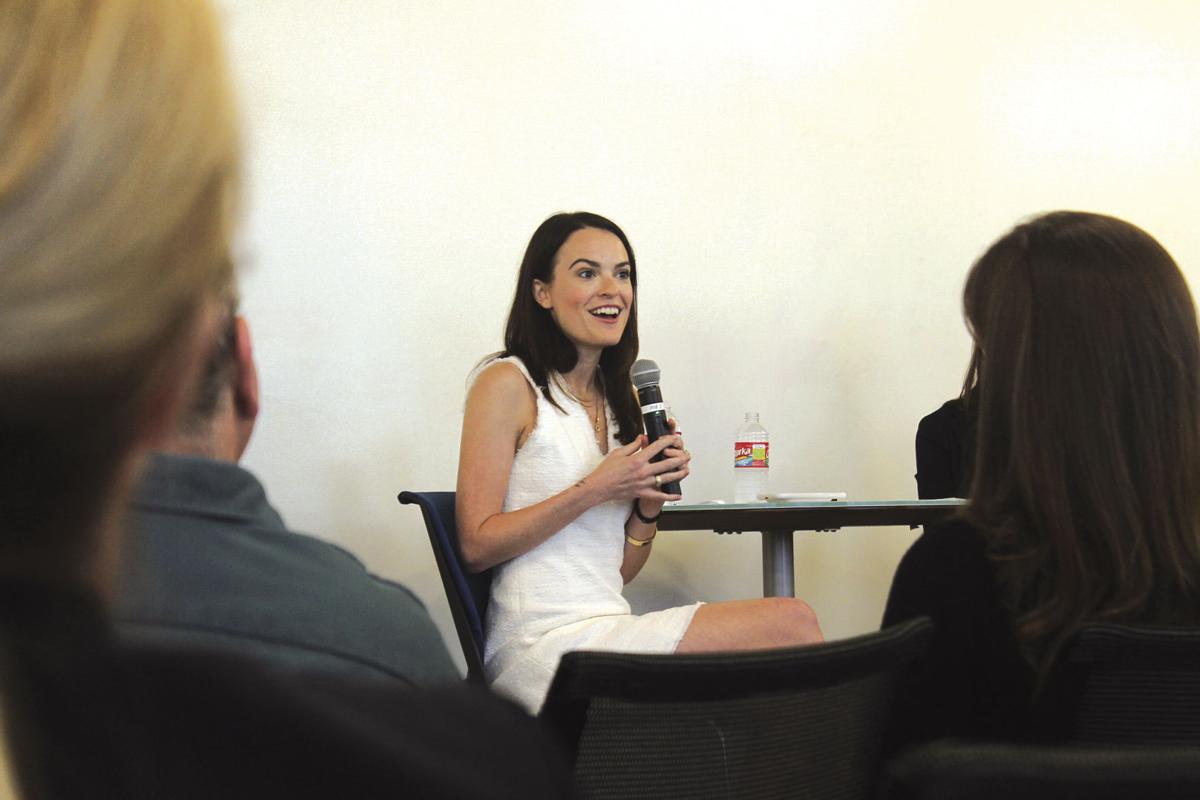 Alex Williamson el-Effendi, head of brand at Bumble, discussed women, technology and the future Wednesday at the Capital One Women in Tech fireside chat. 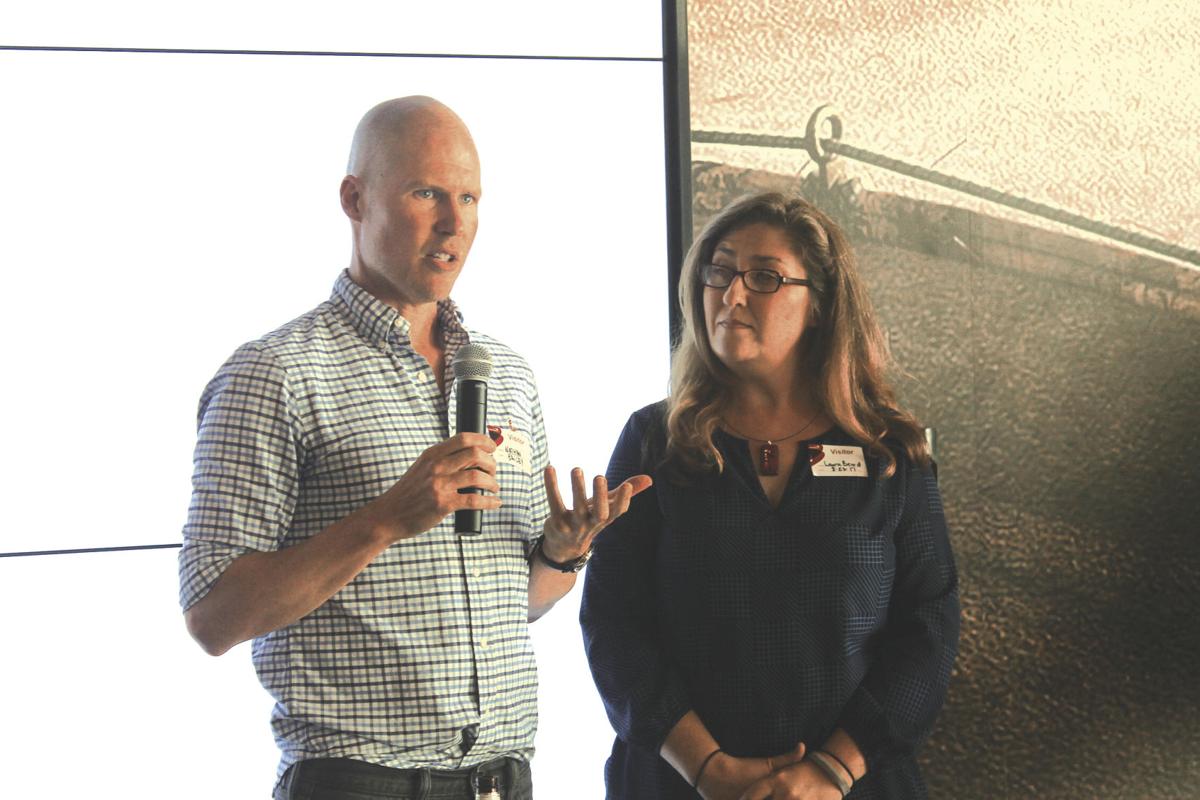 Nathan Bailey, co-founder of Kudo, describes the app with his partner Laura Beard at the Capital One Women in Tech fireside chat.

Karisma Sheth and Ayodele Aigbe, co-creators of Hangio, describe their invention that they hope can redefine closets.

Alex Williamson el-Effendi, head of brand at Bumble, discussed women, technology and the future Wednesday at the Capital One Women in Tech fireside chat.

Nathan Bailey, co-founder of Kudo, describes the app with his partner Laura Beard at the Capital One Women in Tech fireside chat.

To learn more about Hangio, visit itshangio.com. The app, Kudo, is based in Plano and available in the Apple app store or on Google Play.

In a partnership with The Dallas Entrepreneurship Center, Capital One hosted a fireside chat on Wednesday for Women in Tech at their Plano headquarters. The center serves entrepreneurs in North Texas through training, education, mentorship and opportunities to encourage an entrepreneurial community.

Wednesday’s chat featured Alex Williamson el-Effendi - head of brand at Bumble, a dating app where women make the first move - who discussed women in tech and her experience in the technological and business world. Sara Vassar, Capital One senior director of product management, moderated the talk.

In the crowd were several founders, co-founders and startups who’ve worked with The DEC. Among them were Karisma Sheth and Ayodele Aigbe, co-creators of Hangio, the hanger for the 21st century. Sheth is a Plano East alum and longtime resident of Plano. She and Aigbe met in the Product Lab entrepreneurship program at Austin College in Sherman. They were the only women in the program.

“I think that was also the reason we bonded over the fact that we need to create something that changes how closets work,” Sheth said.

Both Sheth and Aigbe studied tech, product and engineering at Austin College and are often among few women in their classes.

“I’m studying engineering, and in a lot of my classes there’s only two or three girls and it can be a little discouraging,” Aigbe said. “But I believe more representation should be had and that females have a lot offer. That inspiration needs to be ignited in young girls and girls in general.”

According to the company’s website, Hangio is a “flexible, durable, all-in-one-hanger” with bendable joints to accommodate clothes of all styles without bending, creasing or slipping. Sheth wears lots of off-the-shoulder blouses that, on the wrong hanger, can clutter the closet. Aigbe said women are constantly in need of products that resolve problems that men don’t see, “and I think women should be solving those problems.”

The DEC has offered Hangio several resources for mentorship and support. And as more women delve into STEM fields, Sheth said women should be on all sides of invention, not just the product side.

“Even from a funding perspective, it’s important to have women because they’re funding a women-owned business,” she said. “And if men can’t relate to a product like this, we need women not just in tech and product, but all around.”

During Williamson el-Effendi’s chat, she discussed Bumble’s start-up days at Southern Methodist University and the importance of representation in the industry.

“Women are necessary in tech and product,” she said. “What’s been so incredible about being women involved is we’re very detail-oriented and we’ve been able to create a community online for women.”

That community has often been threatened or attacked over the years, but Bumble has weathered the storm. Just two weeks ago, the neo-Nazi website Daily Stormer released team members’ phone numbers, emails and personal information to their supporters. The Bumble team was flooded with hateful messages and threats for their stance on women empowerment. They’ve also received criticism for banning misogynist users and becoming one of the first dating apps to partner with the Anti-Defamation League and ban hate speech and other hateful symbols.

“It was a strong choice and a scary move after that experience, but because we’re all so closely knit in the community, I feel like we can run into fire without being afraid because we know that we have each other’s backs,” she said.

When Bumble launched, she said it was meant to impact issues women saw in society, specifically in dating. Women are often perceived as needy, desperate or crazy if they make the first move in dating, she said, so by creating a space where women must initiate conversation, it helped shift perspective. Over time, she said women were more confident and men felt less aggressive, which helped foster true connections from a foundation of respect.

“And I think that’s what’s been so incredible to watch. Now women are making the first move in real life,” Williamson el-Effendi said.

Bumble’s women-led team has also brought innovation to marketing either from pop-up hives where users can meet for a first date, or making it snow in the desert for Coachella. And though these aren’t huge changes to society, they are fresh perspectives toward marketing.

“I think men and women both have their strengths, and we need each other in order to survive and I think we’ve been able to prove women do think differently and provide a lot of insight and impact,” she said.

Plano resident Nathan Bailey was one of the few men at the Women in Tech event. He was there with his partner and co-founder Laura Beard, who recently launched Kudo, the app that connects seasoned bartenders and servers with caterers and event planners in one central place. Beard has been in the hospitality industry for more than 15 years, and she and Bailey are four weeks into the launch of Kudo.

After Williamson el-Effendi’s talk, Bailey said, “I feel like anyone with capabilities and potential deserves respect regardless of what gender they are. I just embrace the concept of being inclusive, of allowing people to play to their strengths and accepting people for who they are, not based on a preconceived notion of what you think this person may be.”

“I believe more representation should be had and that females have a lot offer.”