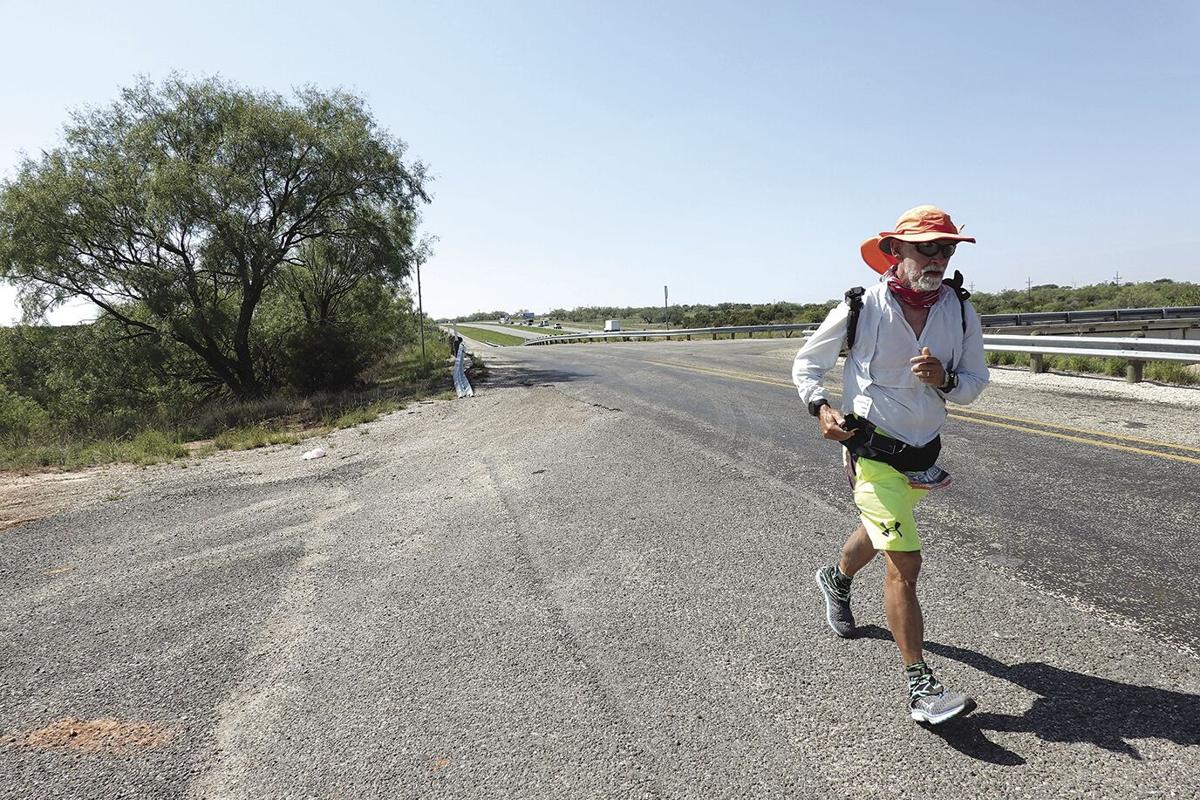 Don Muchow runs through Sweetwater, Texas as part of his route from California to Texas. 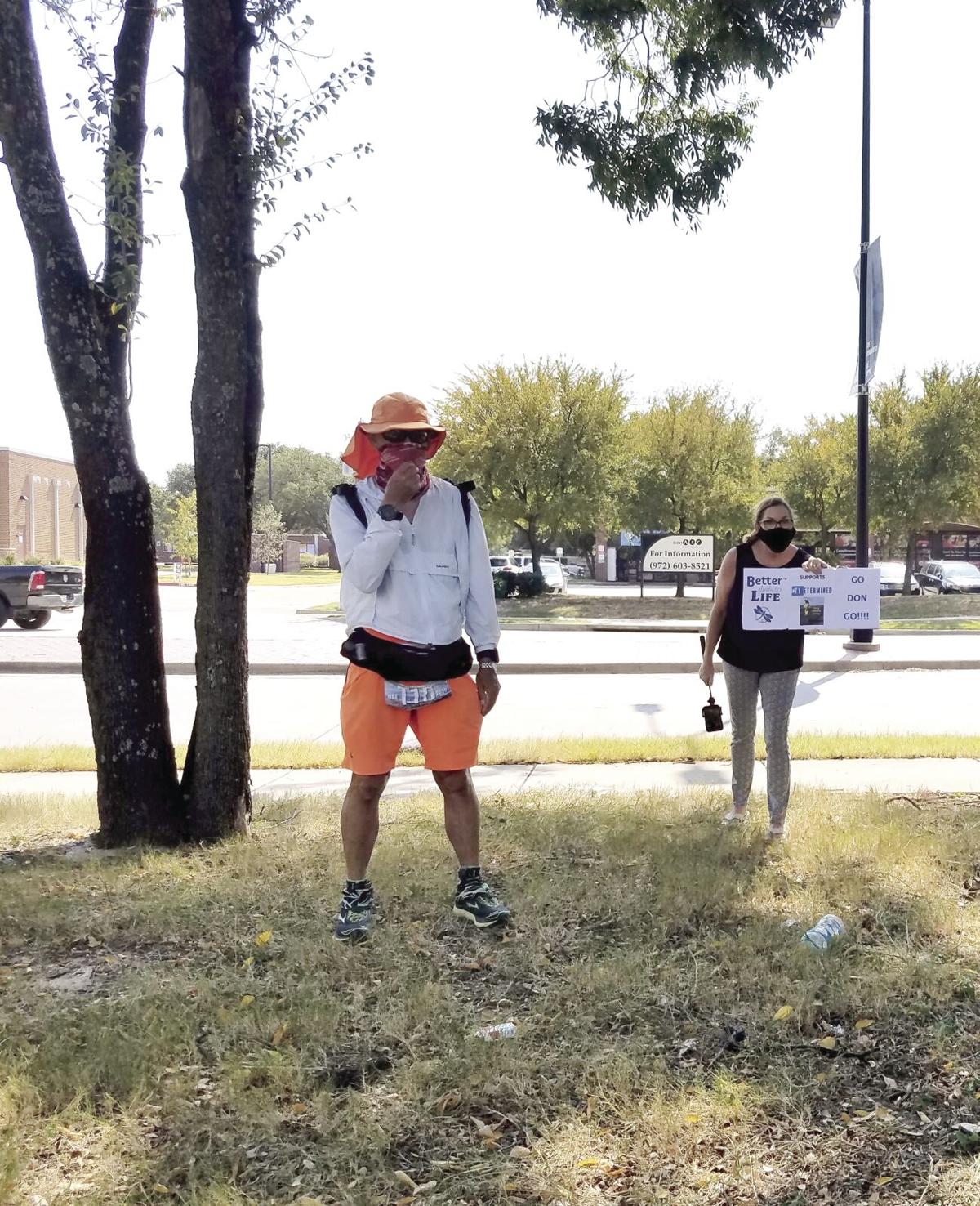 Don Muchow runs through Sweetwater, Texas as part of his route from California to Texas.

Don Muchow wants to show people living with Type 1 diabetes that having the chronic condition doesn’t mean they can’t be active.

Running across the country should do the trick.

Muchow, a Plano resident, is in the middle of a cross country run that began in California and will end in Florida. Essentially, Disneyland Park to Disney World.

Last week the journey brought Muchow, 59, to North Texas, where he ran through cities such as Coppell, Carrollton and Plano.

The run has been interrupted by a series of unforeseen events, but Muchow’s message hasn’t changed.

“I have the opportunity to share with other Type 1 diabetics that there isn’t anything you can’t do if you take yourself seriously and train like any other athlete,” Muchow said.

Muchow was diagnosed with Type 1 diabetes in 1972. It took a while but eventually Muchow said he began to view the condition the way he should have all along.

“It was 2004 when I started to realize the consequences to poor control of Type 1 diabetes,” Muchow said. “So I did what I could to stay in control of my health.”

Muchow decided to run in his first 5K.

“I made a goal,” he said. “If I could stick with it I wanted to do something that would amaze myself.”

In 2017 Muchow did two of them – he competed in his first Iron Man event, and he ran in his first 100-mile run. But he wanted to do more. He would soon have multiple 100-mile races to his credit.

In 2019 Muchow set a record for the fastest to run across the state of Texas, doing so in 27 days, eight hours and 36 minutes. The previous record was just over 29 days, a record held by Jason Arcemont.

Still, there was more Muchow wanted to do.

“There’s a whole class of athletes out there who make it their goal to run across the state or the country,” Muchow said. “I saw myself being capable of doing something like that.”

In some ways, Muchow felt like he had to. He wanted to show people who live with Type 1 diabetes that doing something that’s physically challenging can still be done.

“Type 1 diabetics are universally and viscerally terrified of severe low blood sugars that can result from exercise,” Muchow said. “It's a realistic fear because untreated low blood sugar can kill you or cause permanent brain damage. As a Type 1 diabetic, you have to first acknowledge that this fear is legitimate –

and put practical plans in place to reduce this risk – before you can make exercise a regular part of your life.”

“It’s a hard decision for people to make,” Muchow said. “When I did the Ironman I had to figure out how to do it without killing myself.”

Among many things to consider was the route. With his wife in a van three miles ahead of him the whole way, Muchow typically runs on safe roads that run parallel to the interstates.

“If we need to access civilization then we’re not far from the interstate,” Muchow said.

Things were on schedule at first, but the increasing concerns over the COVID-19 pandemic began to creep into their minds, and Muchow decided to briefly pause his run once they arrived in Carlsbad, New Mexico. Then, unexpected news.

“My father passed away, so we took a break,” Muchow said. “But then there was a new piece to my mission. Do this for my dad, as well as letting people with Type 1 diabetes know they can do this.”

Muchow soon resumed the run, but as the pandemic quickly grew Muchow decided to suspend the run again on March 23. He didn’t start again until Sept. 24, and at that point it was done differently. For example he no longer stayed in hotels on his journey but rather rented homes through Airbnb. He said that’s safer because the turnaround time between guests isn’t as frequent for home rentals as it is for hotels.

Even today Muchow isn’t sure if he’s going to continue straight through because of COVID-19 numbers that appear to be increasing again. He may postpone the run until next spring. He would pick up where he left off.

“It’s not my first choice, but we have to do this safely,” Muchow said.

Muchow has a bit of a following for his recent adventure. Before the pandemic he would have meet-up along his journey, and supporters would even run with him. Now, it’s more of a solo mission.

His Facebook page has more than 600 followers. They’re able to keep up with his journey through a live GPS tracker.

Muchow’s social media pages help connect other Type 1 diabetics, which is important because as he states on his website, “Together is how we figure out what works.” More information on his mission can be found here and here.

Many are inspired with what Muchow is doing. That includes Patricia Daiker, a Coppell resident who was introduced to Muchow as she, too, battles Type 1 diabetes.

Daiker is a nurse coach who, like Muchow, believes that changing one’s mindset is the first step to overcoming any health issues.

She said the key is passion.

“You have to find your passion,” Daiker said. “That’s what gives you energy. When people quit tending to themselves, that’s when complications begin.”

“It’s the idea that anything is possible,” Daiker said.

And if Muchow can provide that inspiration, well, that’s another reason he decided to run across the country in the first place.

“It took 32 years before I realized that I had the role of making myself better,” Muchow said.