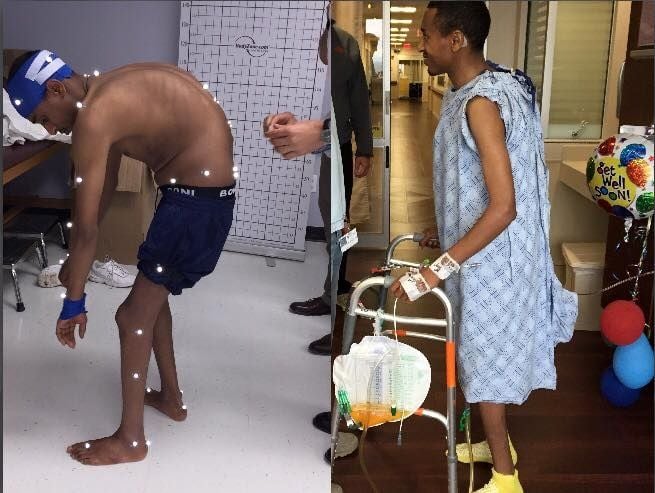 Haymanot Asmare, 20, had a 14-hour surgery to fix the severe curvature of his spine, caused by ankylosing spondylitis. Prior to coming to Plano for surgery, he was living on the streets in Ethiopia, unable to work or take care of himself. 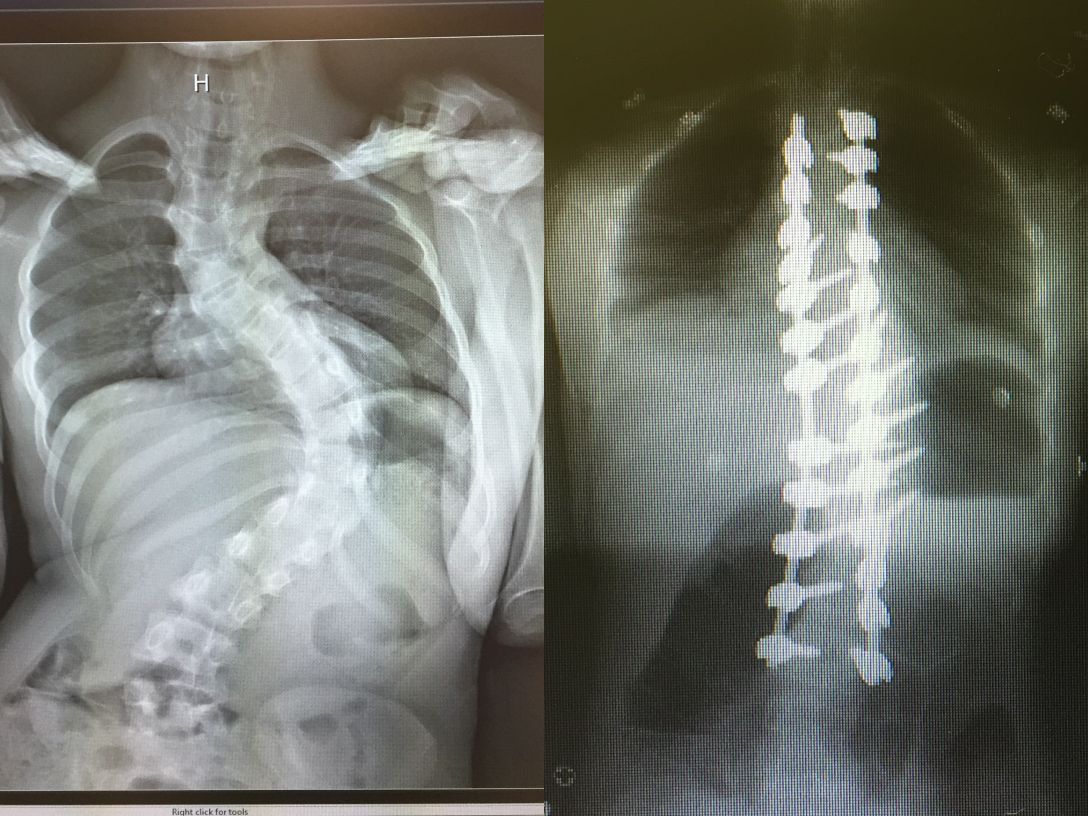 Before and after photos show the severe scoliosis that Samrawit Adinew Teshnie lived with prior to undergoing corrective surgery in Plano last week.

Haymanot Asmare, 20, had a 14-hour surgery to fix the severe curvature of his spine, caused by ankylosing spondylitis. Prior to coming to Plano for surgery, he was living on the streets in Ethiopia, unable to work or take care of himself.

Before and after photos show the severe scoliosis that Samrawit Adinew Teshnie lived with prior to undergoing corrective surgery in Plano last week.

Two young Ethiopians with severe spinal deformities are standing tall after undergoing extensive spinal corrective surgery last week at The Brain and Spine Hospital at The Medical Center of Plano.

One patient, Samrawit Adinew Teshnie, began experiencing scoliosis , or a curvature of the spine, when she was 5 years old. Now almost 13, Samrawit’s spine had an 88 degree curve on the day Dr. Ted Belanger performed her surgery. Belanger said the typical surgery cutoff is a 50 degree curvature.

“An 88 degree curve is pretty severe, and because she’s so young and has a lot of growth left, she was 100 percent guaranteed to get worse,” said Belanger, who has been in practice since 2004 and with the Texas Back Institute for five years. “Once you have a curve that’s more than 90 degrees it starts having an impact on your heart and your lungs. And cosmetically, it’s something that people don’t want to live with.”

Samrawit and Haymanot Asmare, a 20-year-old man with a rapidly deteriorating spinal condition, arrived in Plano on Oct. 19, staying with a host family for a few days before being admitted to the hospital Oct. 25 to prepare for their life-changing surgeries.

Diagnosed with ankylosing spondylitis, an inflammatory condition characterized by auto-fusion of the entire spine, Haymanot was  completely bent over at a 90 degree angle when he was discovered living on the streets in Addis Ababa, the capital of Ethiopia.

Although not the first Ethiopians whom Belanger has helped, Haymanot and Samrawit are the first two patients the surgeon has brought back to Plano to perform surgery.

Belanger first visited the impoverished African country in 2010, where he met Dr. Rick Hodes, an American physician who has lived in Ethiopia for about 10 years acting as the only spine doctor for the country’s 95 million people.

“He was gradually getting referred more patients with spine deformities … and he was sending most of them to Ghana and some of them to the U.S. for treatment,” Belanger said of Hodes. “When I met him, he asked if I could do scoliosis surgery and if I could do it there.”

Belanger returned to Ethiopia  in 2012 to perform several surgeries, all of which went well. To date, he has performed about 60 spinal surgeries on patients in Ethiopia, plus Haymanot’s and Samrawit’s surgeries in Plano.

“Gradually I’ve started doing more and more difficult cases. Between my trips to Africa and the two this week, those have been some of the most challenging cases done anywhere by anyone,” he said. “They’re incredible and very severe. It’s built my skills up over the years.”

Serving as the director of scoliosis at The Medical Center of Plano, Belanger has made it his mission to provide advanced surgical spine care to the underserved in Africa who suffer from complex spine problems, including deformities, tumors, infections, degenerative conditions and trauma. Belanger has traveled to Ethiopia five out of the past six years on a pilgrimage to offer spinal surgery to the community.

Belanger said that although many surgeries can be performed during his annual trip to Africa, Haymanot and Samrawit’s surgeries would be too complicated to perform in Ethiopia. Fortunately, The Medical Center of Plano covered all the expenses necessary to provide the life-changing surgeries, including an extended stay until the patients are ready for rehabilitation.

“I think at the core everybody that’s involved in health care … recognizes that this isn’t just a business – we’re taking care of people, and it’s a privilege to do that,” he said. “The Ethiopia Project is just completely, purely that. I’m just going and I’m helping somebody. There’s no money in it. They say, ‘Thank you,’ and that’s all the thanks I need.”

Belanger said Samrawit’s surgery “went perfectly,” and her spine is straight. Incredibly, she’s already up and moving around.

“In a place like Ethiopia, it’s a major psychological issue because they feel like they’ll never have a family, that no man will want to marry them,” he said of the unseen importance of Samrawit’s surgery. “It really is devastating for them. We do see the same disorder in America, it’s just that in the U.S. kids like that would have easy, quick access to see somebody like me a lot sooner.”

Haymanot’s surgery was a lot more complicated, requiring 14 hours to correct his spine by about 80-90 degrees. Prior to being discovered at Mother Teresa’s Mission in Addis Ababa, and ultimately connecting with Belanger, Haymanot was hunched over so severe that he could not work or take care of himself.

“We basically had to unfuse his spine by cutting through the spine at six or seven levels in his lower back, breaking them apart and realigning them,” Belanger said. “We had to flip him over twice. He looks great, though.”

Although both cases were severe, they’re unfortunately not a rarity in Ethiopia, where spinal deformities are common due to genetic issues and diseases such as polio and tuberculosis.

“These two young people [did] not have access to the proper medical care necessary to intervene and reconstruct their spinal deformities,” said Charles Gressle, CEO of The Medical Center of Plano, in a release. “We are extremely pleased to participate in this joint effort the significantly improve the quality of life in these patients and give them a chance for an independent, productive future. Without the combined efforts of several medical providers, these kids would not have the chance to reach their full potential.”

Samrawit, whose family lives in a mud house with a modest income of only about $90 a month, said she dreams of becoming an astronomer. Once he recovers, Haymanot hopes to become one of the world’s best marathon runners, something he never considered possible before his surgery.

“There’s no feeling like [being able to help these people]. It makes me feel good about what I do,” said Belanger, who spends about half his time planning and executing trips to Africa. “I have a team of people who are behind me, and I’ve made friends all over the world.

“From every angle you look at it, it has enriched my life. On a personal level, it really, to me, is the purest and best thing that I do.”

To make a donation, visit giveforward.com/fundraiser/y715/conscience-international-ethiopia-project-medical-mission. Donations helped the project perform 21 successful spine surgeries in 2015, and enabled a team of nine people, including four spine surgeons, to travel to Ethiopia.

From every angle you look at it, it has enriched my life.”