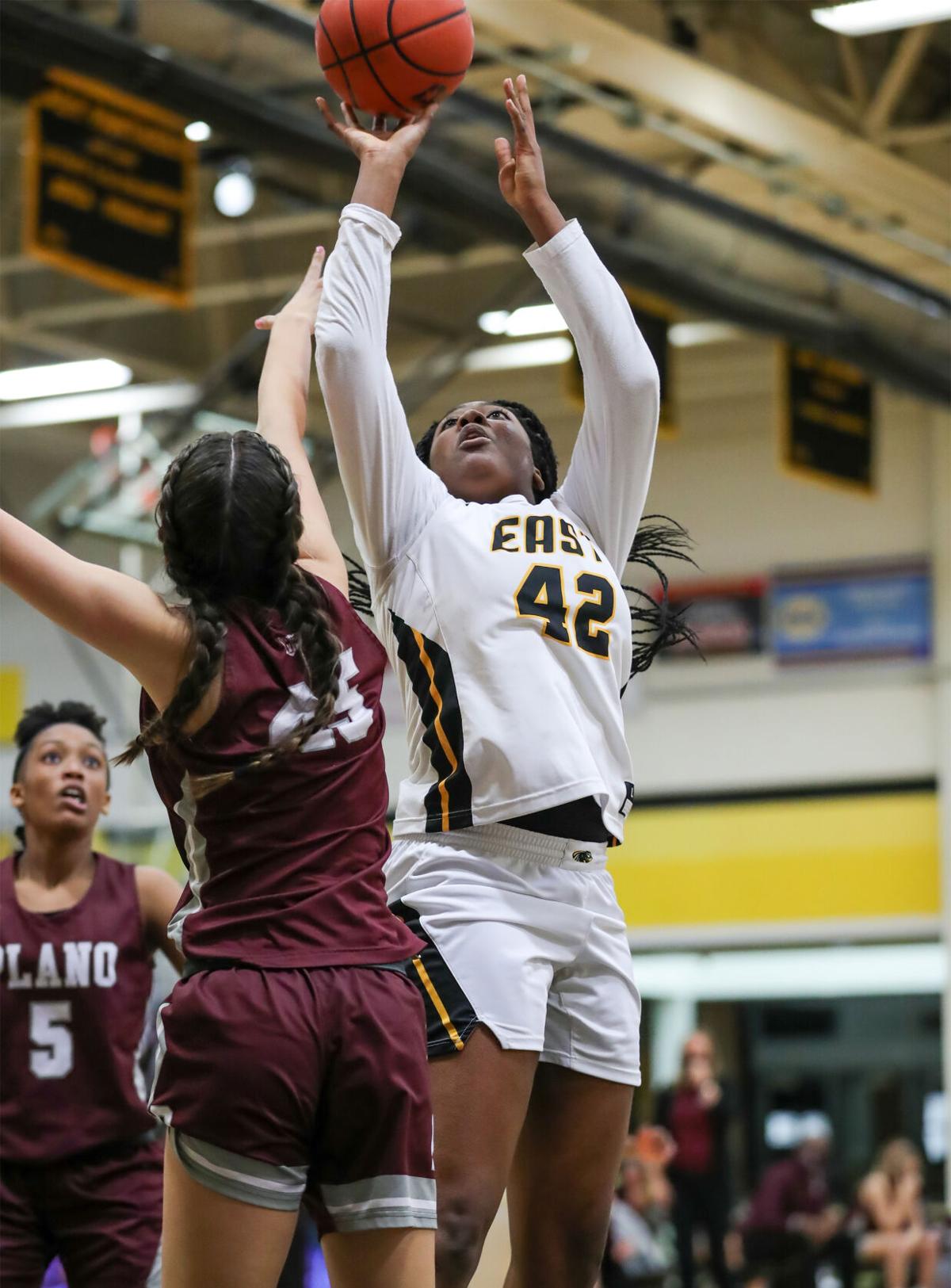 Plano East sophomore Idara Udo and the Lady Panthers were aggressive on the offensive glass in Tuesday’s 41-37 win over Plano. 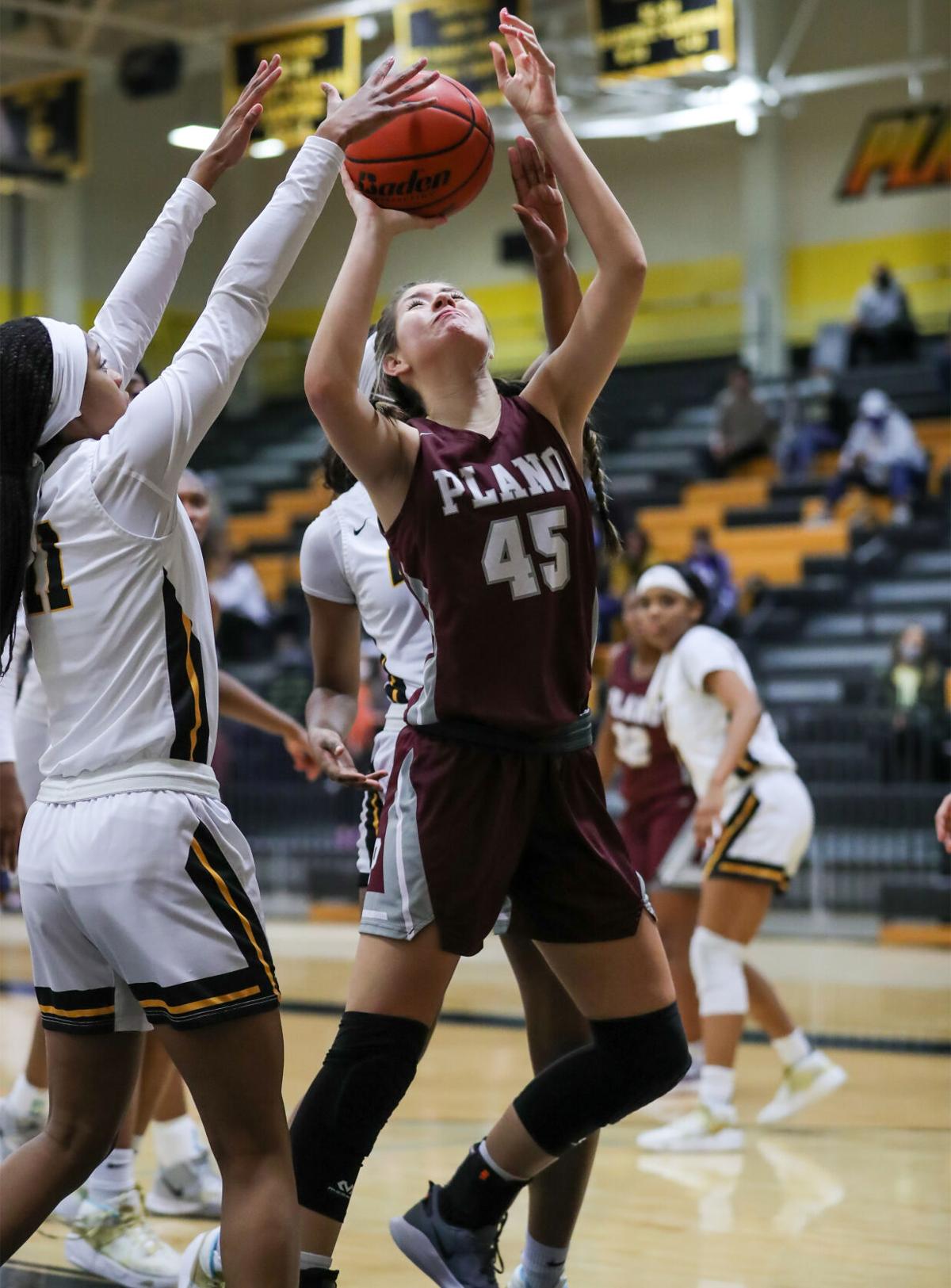 Plano senior Avery Foltz gave the Lady Wildcats a boost in the second quarter of Tuesday’s 41-37 loss to Plano East.

The Lady Panthers had a narrow edge midway through Tuesday’s first meeting of the season between the city rivals, 19-18, but with Plano on a roll after a commanding end to the second quarter.

East penned a different script in the second half, riding a familiar formula of defense and rebounding to snap a three-game skid against the Lady Wildcats following a 41-37 victory that kept the Lady Panthers unbeaten in District 6-6A at 5-0.

“This is huge. Plano has been such a mental jump for these kids. They had never beat them and Plano, at least to me, is kind of the darling of the district,” said Jessica Linson, East head coach. “It’s a huge jump for our kids’ confidence and I’m so proud of them.”

As Linson’s Lady Panthers continue to grow — four of East’s five starters been played major minutes at the varsity level since they were freshmen — Tuesday’s win was a pivotal step in that development. After being felled by the Lady Wildcats down the stretch in previous head-to-head matchups, East closed strong after a fourth-quarter salvo by Plano trimmed the Lady Panther lead to 34-31 with 4:45 to play.

The Lady Wildcats went to work inside with a post-up that junior Josie Bruder turned into a short basket and sophomore Salese Blow finished a crafty layup in transition moments later for a surge that brought the Plano bench to life and made Tuesday’s contest a one-score game.

East responded with a 7-2 run, creating some opportune looks of its own in the paint. Junior Donavia Hall assisted junior Ada Anamekwe for a bucket inside and junior Savannah Adjetey beat Plano off the dribble from the top of the key for a finish, plus a foul, that put the Lady Panthers back in control, 38-31.

Kayla Cooper showcasing a nice pull-up game in the 2nd half vs Plano. She hits a long 2 to give Plano East a 34-27 lead with 5:19 left in the 4th to force a Plano timeout. pic.twitter.com/bkkSIxnXvb

Although open shots were tough to come by on either side, East manufactured a few timely, high-percentage looks late to put the game on ice — the last coming on an uncontested layup by junior Kayla Cooper, who scored all of her team-high nine points in the second half, that swelled the Lady Panther lead to 41-33 with less than a minute to play.

“We went spread with some ball screen actions,” Linson said. “We have sets, but we have some wrinkles that we had put in. We just wanted to attack them downhill and make them have to defend, and players like Kayla and Savannah came up big with some shots.”

“In these rivalry games, one or two plays can make a difference — a defensive lapse that leads to an open shot that gives the other team a bit of a boost,” added Kelly Stallings, Plano head coach. “It’s one or two plays and you’ve got to be ready to grind out. Plano East just made more plays than we did. We had a few lapses that changed the tide.”

The Lady Wildcats played catch-up for all but a couple minutes of Tuesday’s ballgame, trailing by as many as 10 points early in the second quarter after East’s defense imposed its will early on. Anamekwe, in particular, wreaked havoc on Plano’s half-court offense — logging four steals and two blocks to go along with eight points in the win.

“She’s just so athletic. She does the little things like dominate the boards and can be such a difference maker,” Linson said. “She was just that for us tonight.”

Plano countered behind a big second quarter from senior Avery Foltz. The forward put her size to use with an eight-point second quarter on her way to a game-high 12 points. Mixing in some timely plays on defense, Foltz helped the Lady Wildcats weather the initial East storm and trail by just one point at the half, 19-18.

“Avery’s confidence has grown a lot this year. She’s a very skilled player and she has the confidence, especially over these past few games,” Stallings said. “We had some kids out due to COVID protocols and she really stepped up. She’s always been a solid defensive player for us, but she’s really grown into her role and skill set for us.”

Foltz was complemented by nine points from senior Amaya Brannon, while East was fueled by eight points and three steals from Hall and seven points and seven rebounds from sophomore Idara Udo.

HALF: Plano East 19, Plano 18Big 2nd quarter for the Lady Wildcats, who trailed by as many as 10 pts before closing on a 12-3 run. The play of Sanaa Murphy-Sowers and Avery Foltz was a big reason why. Here's the 2 connecting for one of Foltz's 8 pts that quarter. pic.twitter.com/yGipKdp5C5

Udo was challenged by Linson to be more active on the boards to combat a physical effort by the Plano defense to slow the Lady Panthers’ overwhelming interior game. After totaling just two offensive rebounds in the first half, East created a bevy of extra possessions over the last two quarters with eight offensive boards — including five in the fourth quarter to keep Plano at bay.

“We just weren’t getting easy buckets. We were getting shots but were just missing. I told them that we had to start crashing the boards,” Linson said. “They started getting pretty physical down low, so we had to crash the offensive boards to get some easier shots, and they responded very well to that.”

Stallings, meanwhile, lauded her club’s response to another defensive-minded battle with the Lady Panthers — particularly given that Plano entered Tuesday’s game only one week removed from a COVID-19-related quarantine. The challenge going forward will be translating the team’s defensive work into the other side of the court — an area East thrived in on Tuesday.

“It was tremendous. That’s how our games have been. We both have similar teams from last year and coaches who drill defense everyday and the effort, intensity and skill that it takes to play defense,” Stallings said. “The thing we didn’t do as well as they did was finish those defensive plays and transition those stops to the other end.

“We’re just a week out of quarantine — this year has been a weird one and you just have to take things as they come. But I thought our girls competed well tonight and put forth a great effort.”

The Lady Wildcats look to bounce back at 7 p.m. Friday when they welcome Flower Mound, while East visits Coppell for a 6:30 p.m. tipoff that same night.