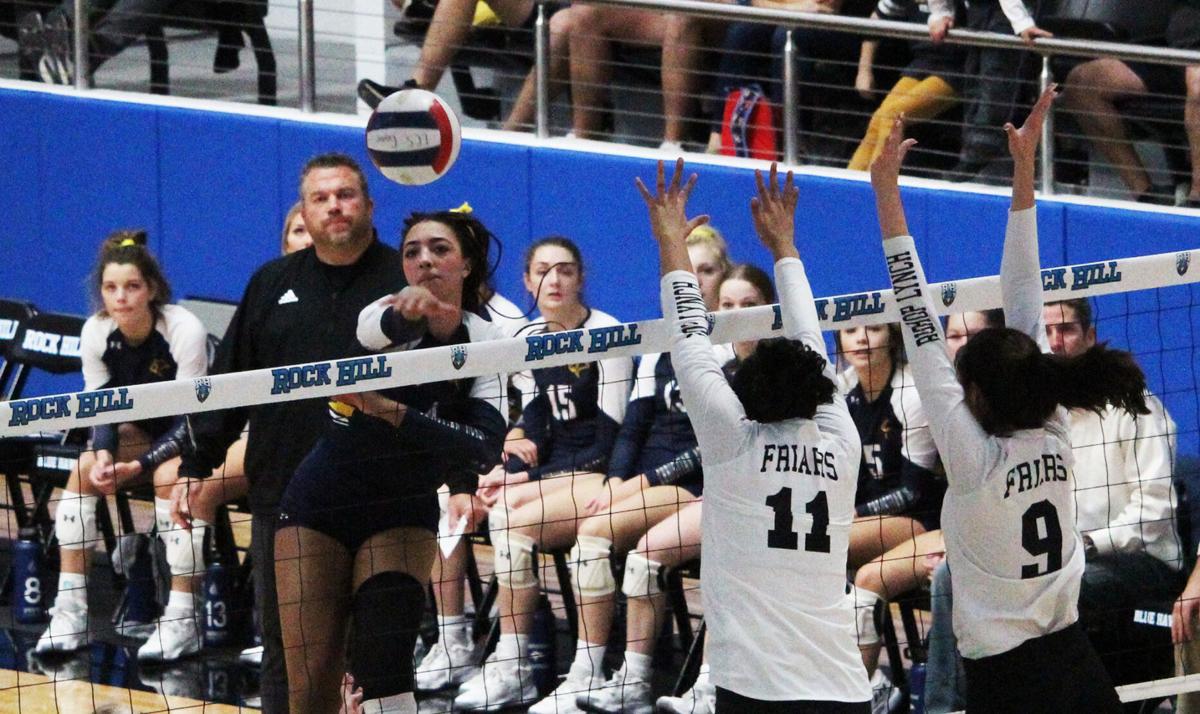 The Prestonwood Christian volleyball team celebrates with a banner following its 3-2 come-from-behind win over Bishop Lynch to qualify for the TAPPS state tournament.

FRISCO — After dropping the first two sets in a match for just the second time since Aug. 28, the Prestonwood Christian volleyball team opted to keep things simple Saturday night in its Texas Association of Private and Parochial Schools state quarterfinal.

Behind a hard-hitting offensive from Lauryn Lambert and Maddie Nolan, longtime rival Bishop Lynch found itself one set win away from a redemptive victory over a Lady Lions team that bested the Lady Friars twice during the regular season.

“After that second set, I said, ‘I don’t know if we can win five, but I know that we can win five points. Let’s be the first to five,’” said Ryan Mitchell, Prestonwood head coach.

The Lady Lions answered that call in each of the final three sets on Saturday — and with each small gain that Prestonwood made in trying to claw back from its two-set deficit, Mitchell saw the confidence of his young squad grow.

“We were the first to five in every set after that,” Mitchell said. “The focus changed. When they called timeout, the goal then became that if it’s something like 5-2, let’s make it 10-6. We segmented the game as much as we could, and they bought in.”

And the Lady Lions have a spot in the TAPPS 6A state tournament to show for it — weathering the early barrage by Lynch to score a 3-2 come-from-behind victory (24-26, 22-25, 25-18, 25-13, 15-9) for a berth in the state semifinals. In pursuit of a fifth state volleyball title, Prestonwood next meets Argyle Liberty Christian at 12:30 p.m. Friday at University High School in Waco.

“I’m just impressed. It’s hard to come back 0-2 against anybody, let alone on the road against a really good team,” Mitchell said.

Here's the final point and celebration for @PCAAthletics after their come-fron-behind 3-2 win over Bishop Lynch in the state quarterfinals. pic.twitter.com/PS35GqM8CG

The Lady Lions’ comeback was authoritative — they held wire-to-wire leads during the third and fourth sets and trailed at only two junctures of the fifth frame (2-1 and 6-5). A renewed aggression on offense coupled with some timely defensive adjustments to quell the firepower of Lynch’s top hitters sparked the rally as Prestonwood wound up knotting the match at 2-2 in decisive fashion.

The Lady Lions scored set wins of 25-18 and 25-13 to draw even, including just four kills allowed in the fourth set. That number alone was matched by both Prestonwood sophomore Jadyn Livings and sophomore Mikala Young on the other end of the net, as the Lady Lions rolled into set five with an abundance of energy — soaking in chants of “P-C-A” by the sizable fan and student sections.

“I think you just felt the momentum swing at that point. In set five, there was a lot of confidence,” Mitchell said. “Lynch managed to tie it up at 5-5 in the fifth and I was wondering if this was their comeback stand. But our girls stayed composed and did a good job.”

The Lady Lions and Lady Friars traded the lead three times in the fifth set en route to a 6-6 tie before Prestonwood broke free with a run of five consecutive points. Livings and Young combined for six kills in the decisive frame, as the Lady Lions pulled away to score a 15-9 victory following a Lynch hitting error.

The win was the seventh in a row for Prestonwood and the 22nd in the team’s last 23 matches. But Saturday’s materialized like no other on the team’s schedule — having only been to five sets one other time (Sept. 18 vs. Gunter).

Saturday’s comeback was pivotal for the team’s growth, according to Mitchell. Prestonwood’s starting lineup is mostly comprised of underclassmen, including four sophomores and a freshman.

If there was ever a moment for that youth to surface, Lynch did its part to make the upstart Lady Lions uncomfortable with Saturday’s 2-0 start. Lambert and Nolan were on fire for most of the night — the Lady Friars’ duo combined for 12 kills in the first set and 10 in the second.

Several of those points came by swinging right over the top and through the Prestonwood defense — something Mitchell and his staff adjusted to as the match progressed to align a bigger block with both hitters. Chambers, Livings, sophomore Camille Edwards and senior McKenna Brumby all played a hand in slowing Lynch at the net, either through blocks and redirecting the hit into the back row for freshman Gillian Pitts, senior Jordyn Sin and the defense.

“We were just trying to match up our best blocker versus their best hitter. We knew the ball was going to [Lambert] so we tried to overplay her as much as we could,” Mitchell said. “She made a couple hitting errors at the end and we think it’s because we served her the entire game. You’re hoping tired legs bring out some errors in the fifth.”

Saturday’s win improved Prestonwood to 38-5 on the season, which included a 9-1 mark in district play. The Lady Lions have carried that success into the playoffs with wins over Houston St. Pius X (3-0) and Lynch (3-2) to move within two wins of hoisting a state title.

It’s a familiar spot for Mitchell, who made the move to Prestonwood in May after winning the seventh state championship of his coaching career at Lovejoy last year. Mitchell built that program from the ground up, compiling a 354-40 record in nine years and he did so starting with rosters chalked in youth — a full-circle moment as he embarks on his first season leading the Lady Lions.

“It feels a lot like my early years at Lovejoy with those really young teams,” Mitchell said. “Having to shepherd them through how to win and how to compete. Through all those situations, you’re hoping for some growth and tonight was a big step for us.”

Have the latest Plano Star Courier news delivered right to your inbox!

Get the Plano Star Courier in your inbox!

Lewisville City Council gives consensus on changes to I-35 corridors

Changes are coming to I-35 as the Texas Department of Transportation (TxDOT) and Lewisville’s Parks and Recreation department enter new phases of the I-35 bridge project.

3 takeaways from Celina's "State of the City" event

Plano police conducted an arrest on Friday on murder charges stemming from the suspected homicide of Jesaias Nieves.

In recognition of Teen Dating Violence Awareness Month, the Cozby Library is scheduled to host an Adulting: Healthy Relationships program on Feb. 21. Registration is not required.

A Carrollton teacher was named one of the elite 100 last week for helping his students recover from learning loss during the pandemic.

The priority of the McKinney Fire Department has always been and will remain the safety and well-being of the community. As the city continues to grow, resources must be added to keep up with the pace of growth and reallocated to areas of the greatest need.

The citywide curfew for minors in Plano was extended for another three years.