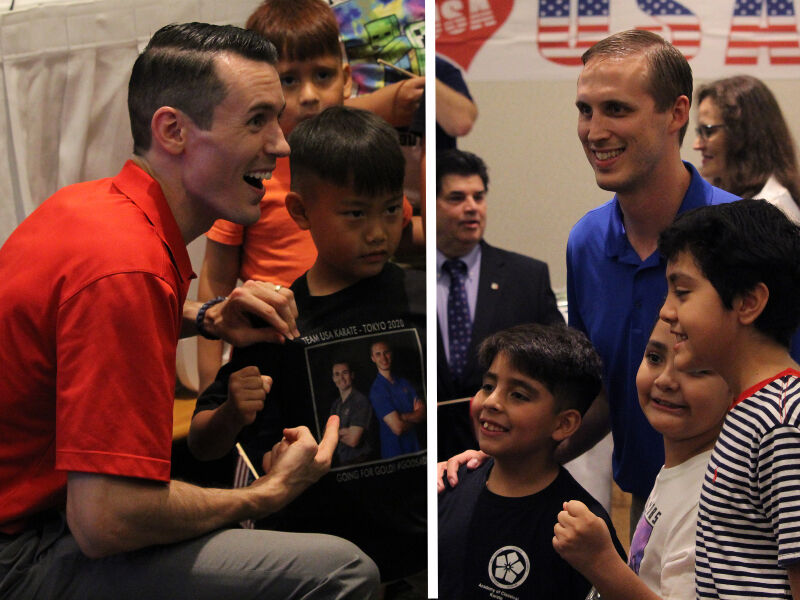 Plano-trained karatekas Tom Scott, left, and Brian Irr pose for pictures during a sendoff party held July 9 at The Westin Hotel in Dallas. Scott and Irr will represent the U.S. in karate for the upcoming Olympic Games. 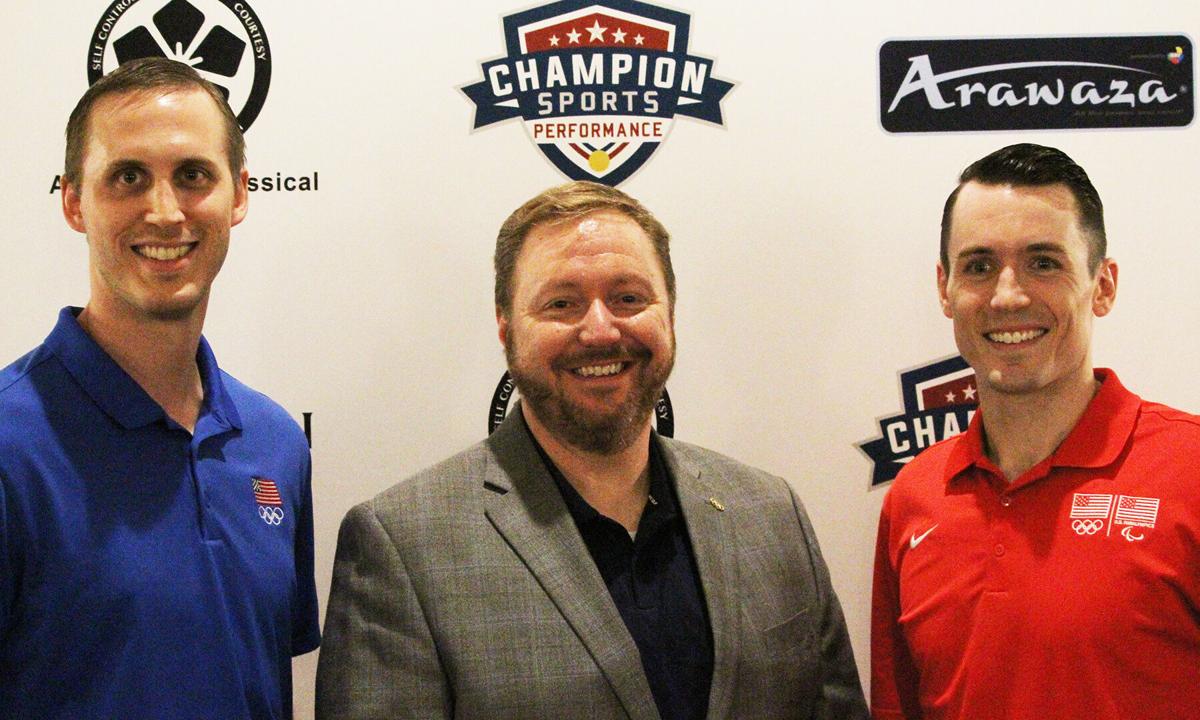 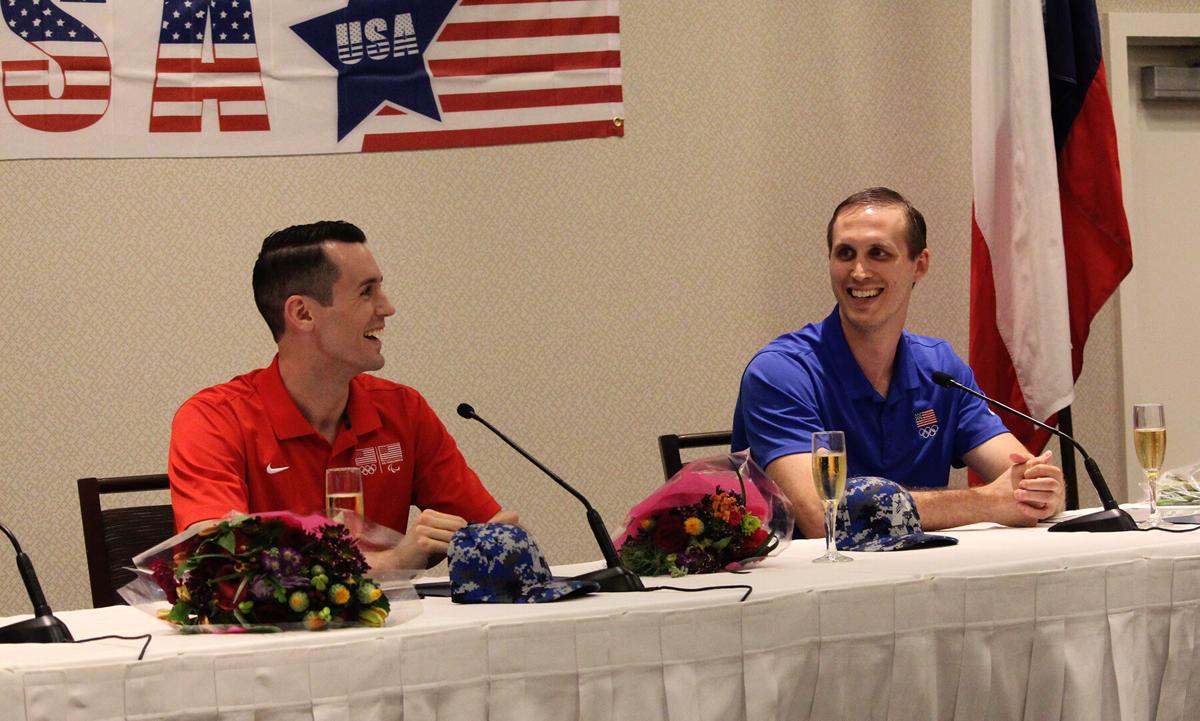 Tom Scott, left, and Brian Irr share a laugh during a sendoff party held July 9 at The Westin Hotel in Dallas to celebrate the two qualifying for the Olympic Games.

DALLAS — From age 8 when they first began training karate, even in different parts of the country, Tom Scott and Brian Irr have long since been connected through martial arts.

Although more than 1,500 miles separated the two during their upstart days practicing the sport — Scott, a lifelong Texan and Richardson native, and Irr, born in New York — the two have forged a bond as teammates and instructors at the Academy of Classical Karate in Plano over the past few years.

Through that friendship, and a selfless support system, Scott and Irr will realize a longstanding dream together as members of the first-ever U.S. Olympic karate team.

The two Plano products will soon depart for Tokyo as part of a four-man team — the others being California’s Sakura Kokumai and Florida’s Ariel Torres. Kokumai and Torres will represent the U.S. in kata (forms) for karate, while Scott and Irr will be the country’s lone participants in kumite (fighting) and will be accompanied by USA Karate head coach Brody Burns, who owns the popular Plano dojo.

“It’s unbelievable. It’s been crazy to think about how everything you’ve planned on is happening,” Burns said. “I shouldn’t be surprised because this was the plan and all of them had the potential from the beginning. It was never a pipe dream for these guys. For it to actually happen and for them to all qualify, I’m overjoyed.”

There were plenty on hand to share that joy with Burns and his two star karatekas on July 9 during a sendoff party held at The Westin Hotel in Dallas. With Irr and Scott seated in front of a sizable crowd, the two received praise not just from those in attendance, including Plano mayor John Muns, but others who connected to the party via Zoom — coaches, training partners and members of USA Karate.

“I knew that they could do it,” said Chris Stratis, USA Karate sports performance coach. “I knew that we had all the pieces and the support structure around them, not just on the skill side but the teammates to train with, the strength and conditioning and all those pieces coming together. I could see that this was the package we needed and I fully believed we would get there.”

As Scott said when he addressed the crowd later that evening, he and Irr wouldn’t be in this position without each other. Long before the two shared the same dojo in Plano, Scott and Irr were childhood rivals.

“We grew up competing against each other as teenagers and we would always be vying for the same spot on the national team as juniors,” Irr said. “As we got older, we gravitated towards different weight classes and were not so much rivals as were teammates on the national team.”

Trading wins and losses against each other as teens, the 6-foot-4 Irr eventually grew into a higher weight class than Scott. In Tokyo, Irr will compete in the over-75 kg division and Scott will be in the under-75 kg division.

Although the two will be in lockstep in making U.S. Olympic history next month, they’ve taken different paths to get there. Born in New York, Irr made the decision to move to Texas after the International Olympic Committee announced the addition of karate to the Summer Games in Tokyo in 2016.

“We were able to scramble and get him an apartment with one of the parents of a kid who had a two-bedroom apartment, so he lived there until he got his own place.”

It was a dream that had at last become attainable for Irr, who made this way up the ladder with the U.S. junior national team at the Pan American Games and Junior World Championships before competing in the senior ranks. Along the way, he won a bronze medal at the 2015 Pan American Games and later a gold in 2019, followed by a gold medal in 2020 in Karate 1-Premier League competition.

Ranked No. 9 in the world in the over-84 kg weight class by the World Karate Federation, Irr secured his spot in the Olympics via continental representation following a qualification tournament in Paris, according to TeamUSA.org.

“There has definitely been some unexpected busyness,” Irr said. “You would think that all the busyness would come from training extra and preparing that way, but really we had already planned out our training up until competition day. There’s all the extra stuff and it can be a little distracting, but it’s just about staying focused and enjoying the process.”

Scott, meanwhile, is among the country’s most decorated practitioners in karate. The team captain of USA Karate, Scott has garnered a laundry list of accolades in the sport over the years.

Nicknamed “Captain America” among teammates and fans for his values and devout patriotism, Scott is a six-time Pan American champion, a 15-time national champion and a 10-time USA Open champion.

Ranked No. 6 in the world by WKF at under-75 kg, Scott’s Olympic pursuit hit a road block after initially being listed as an alternate on the roster following a recent loss to Iran world champion Bahman Asgari Ghoncheh. Asgari, however, was flagged for a one-year doping violation and Scott was awarded the open spot on the roster.

“It was unreal getting that phone call,” Scott said. “I’m training with the attitude that this is a gift and I have nothing to lose. I need to go out there and be free, fight and enjoy it all. I need to do my thing and I think if I do that, the rest will take care of itself.”

Since qualifying, it has been a whirlwind of preparation for Scott, who said the recent sendoff party might have been the first time he had been able to reflect on the accomplishment.

“I haven’t actually stopped to think about it. The competitor in me immediately is already studying, practicing, watching video, working — we hit the ground running,” Scott said. “Tonight may honestly be the first chance I’ve had to sit back and think, ‘Wow, this is something I’ve wanted for a long time.’”

Irr shares that sentiment. As he and Scott shed their childhood rivalry and became teammates, the two have worked towards this opportunity together.

“We were competitors back in the day and now the only reason we’re here is because of each other,” Scott said. “It’s funny. I’ve gotten to know him really well. He’s very easy going. We have our pet peeves but we’ve been in hotel rooms for what feels like four years straight trying to make this happen.”

“It’s really cool when you have a group of people that are always looking to better each other, not selfishly but the group as a whole,” Irr added. “I think the result of us both qualifying for the Olympics is a sign of cohesion and working together — not just the two of us but the coaches and training partners and everyone working together to make each other better.”

It’s the classic case of “iron sharpens iron.” As Plano’s Academy of Classical Karate has grown, Scott and Irr can look to a team chalked in national champions at the local dojo to help prepare them during this journey.

With parts of that support system now joining the two karatekas for their trip to Tokyo, including longtime coach Burns, the duo has their sights set on a memorable debut for U.S. karate on the Olympics.

“The cool thing is I can see it,” Scott said on potentially medaling. “Some of these guys are legends but no one has been in this event. It’s an even playing field for everybody.

“I’m trying not to think about afterwards — I’m trying to keep my mind in preparing to get that done, but I want to do that. It would be awesome.”