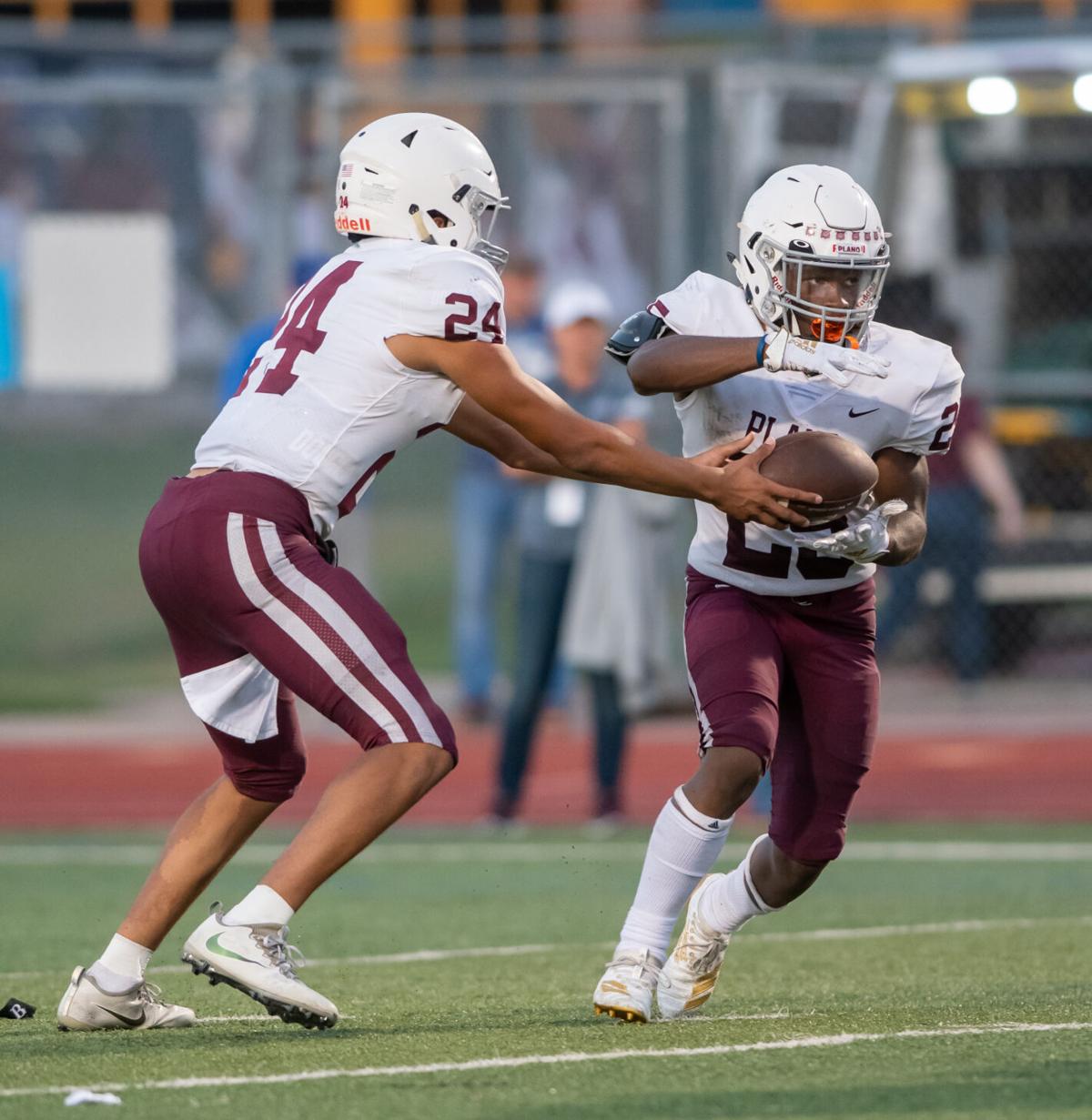 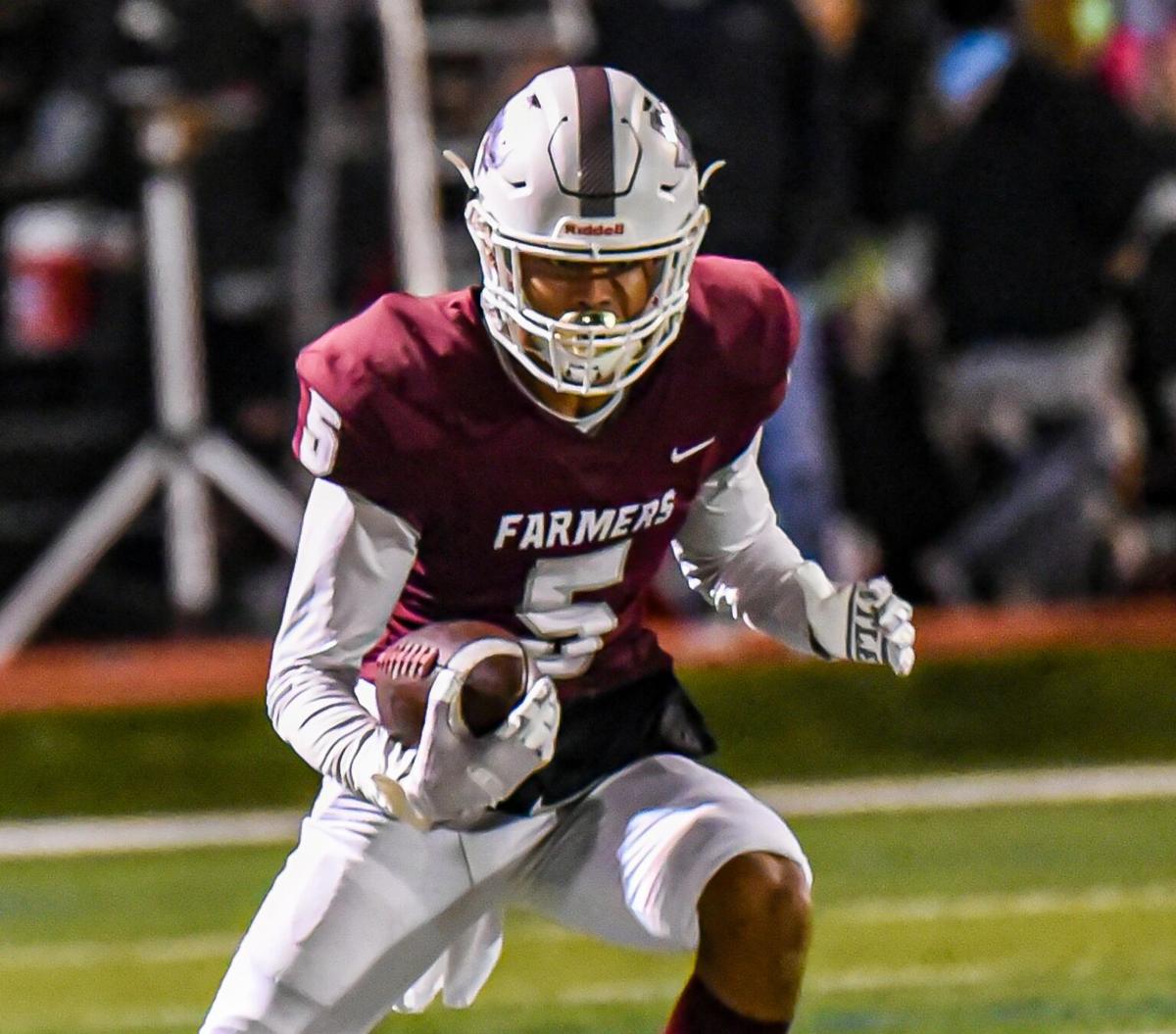 Lewisville senior Isiah Stevens and the Farmers will open their 2020 season Sept. 25 against Rockwall-Heath. 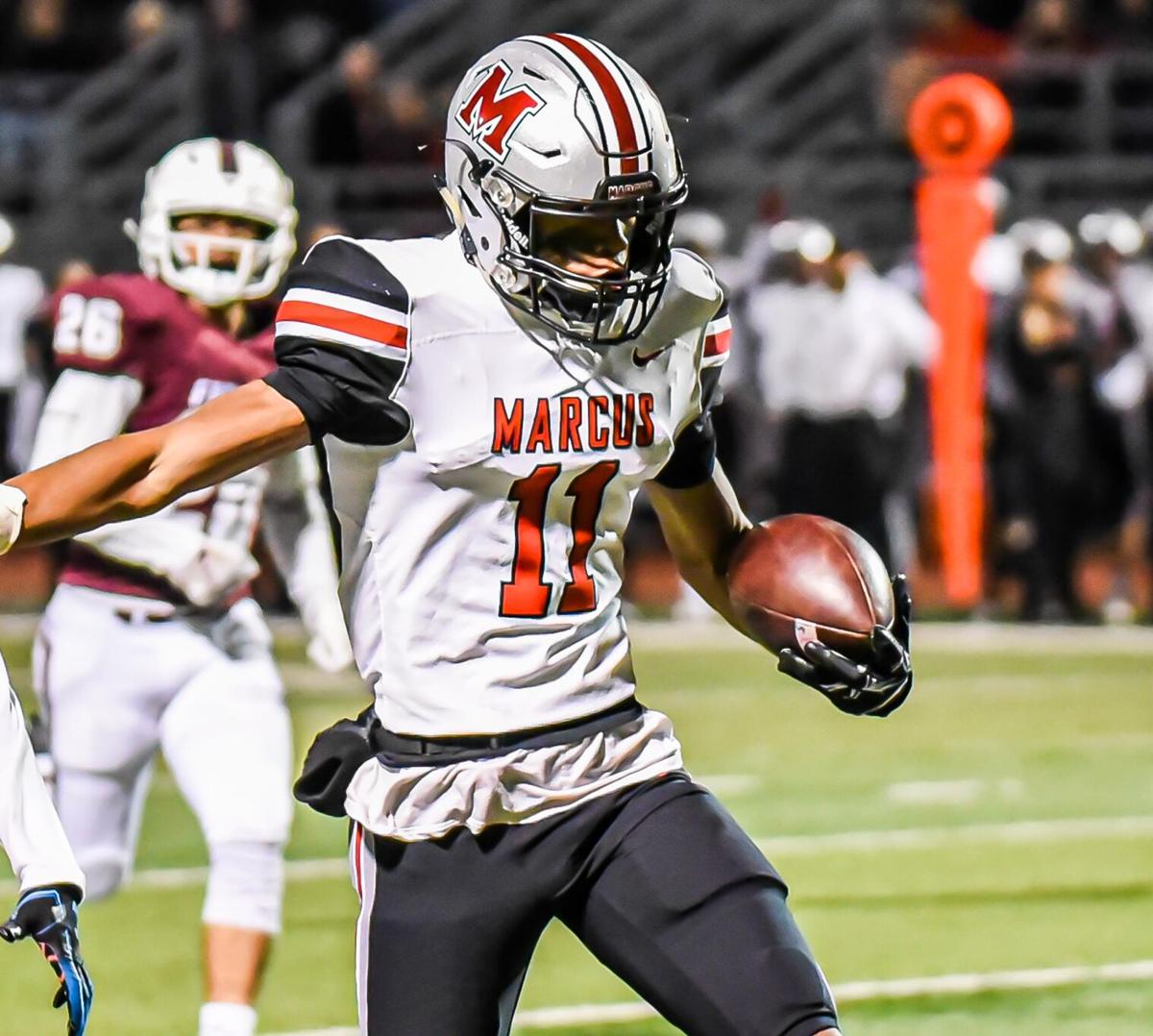 Marcus junior Dallas Dudley and the Marauders will open their 2020 season Sept. 25 against Jesuit. 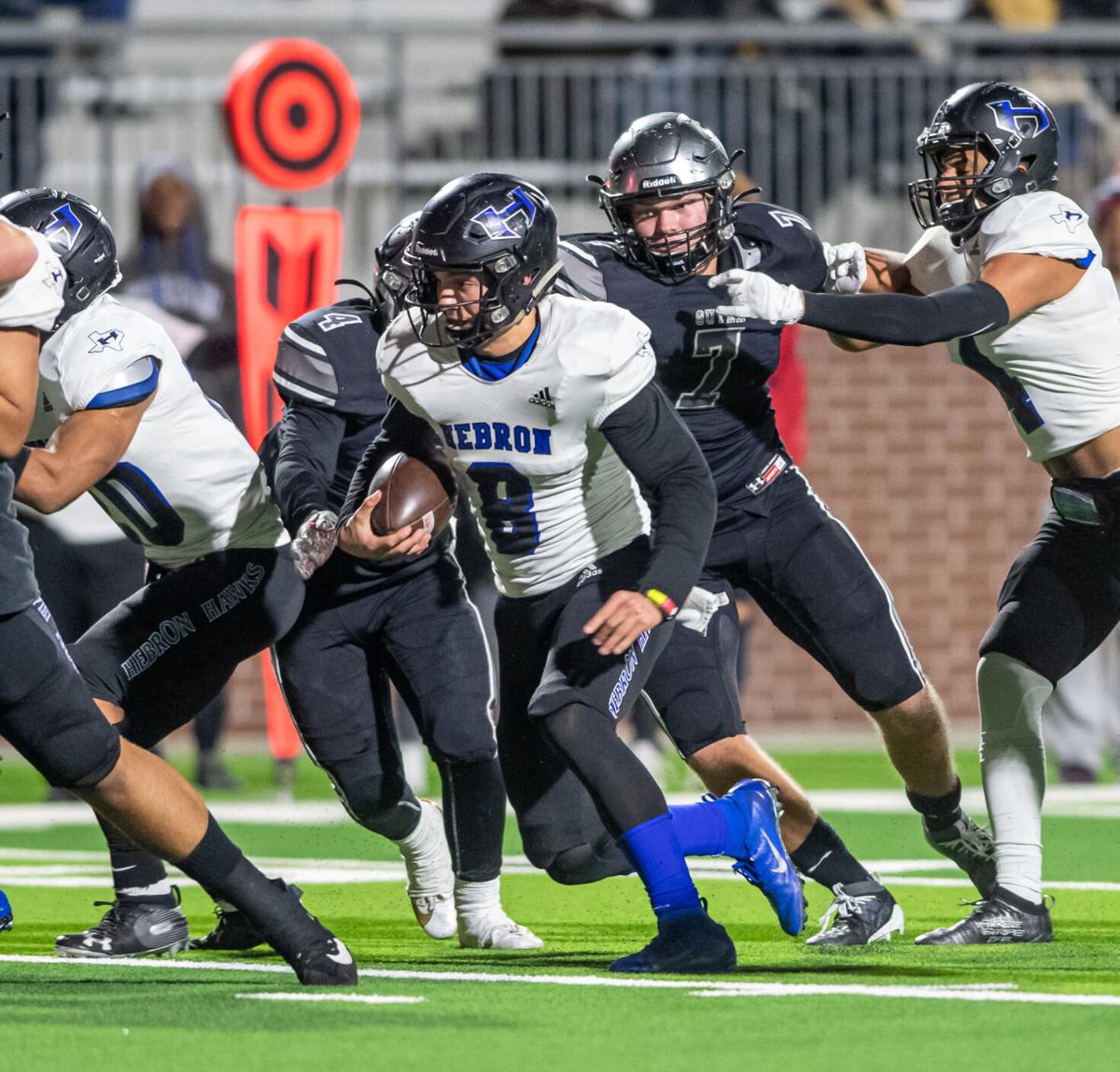 Hebron squared off with Denton Guyer in last season’s bi-district round. The Hawks and Wildcats will open the season against each other Sept. 25 from Hawk Stadium.

Lewisville senior Isiah Stevens and the Farmers will open their 2020 season Sept. 25 against Rockwall-Heath.

Marcus junior Dallas Dudley and the Marauders will open their 2020 season Sept. 25 against Jesuit.

Hebron squared off with Denton Guyer in last season’s bi-district round. The Hawks and Wildcats will open the season against each other Sept. 25 from Hawk Stadium.

Just as the UIL’s July 21 announcement outlining plans for high school football offered some much-needed direction, it sent teams all around the state into a frenzy revising their schedules for the upcoming season.

Although 5A and 6A schools won’t kick off until Sept. 24-26, several school districts had already shut down in-person learning and extracurricular activities until September following county health orders, including Dallas County and Tarrant County.

While some of those districts may choose to revise that schedule in lieu of Texas Attorney General Ken Paxton’s letter on Monday, which stated that school districts, not local health authorities, should decide when to open their campuses to students, several football programs have already made changes to their non-district schedules for this season.

Schools that remain shut down through Sept. 7 wouldn’t be able to begin playing football games until Oct. 1-3.

“It’s been a scramble and it’s been challenging. You deal with it and like I tell my coaches you can only control your attitude and the things in front of you,” said Michael Odle, Lewisville head coach. “You can’t control the constant change and the protocols that make it difficult — we’ve just been bowing our necks and trying to do what’s best for our kids.”

The Farmers were among the programs indirectly impacted by county health orders, having scheduled Arlington Bowie and Keller Timber Creek — both of which are located in Tarrant County — as their first two opponents.

“We had two Tarrant County schools for Weeks One and Two. Tarrant County has different rules from Denton County, so those schools won’t be able to play as early as we are,” Odle said. “We had the choice of not playing or finding new opponents. As coaches, we have different forums, group chats and e-mail chains to help get information out quick and see who else is in the same boat.”

The Farmers will instead kick off their 2020 season Sept. 25 with a home game against Rockwall-Heath before an Oct. 2 showdown against Wylie. Odle left open the possibility that Lewisville’s game with Wylie could change depending on how Keller ISD approaches the start date for its football programs.

“It actually works out pretty well because we were both trying to play Keller schools and neither of them can play,” Odle said. “If for whatever reason Keller allows their guys to go back earlier than they thought, we could go back and grab our original games. We’re planning on playing Wylie, but if those Keller schools get released and are looking to pick up a game, we could easily go back.”

Defending 6-6A champion Marcus was also busy with its schedules, having to make a pair of changes to its preseason lineup. With a marquee opener against powerhouse Highland Park falling through the cracks in lieu of the Dallas County health order, plus a Week Two showdown with Trophy Club Byron Nelson, the Marauders will instead welcome Jesuit on Sept. 25 and travel to McKinney on Oct. 2.

McKinney has also worked its way onto Plano Senior’s schedule. The Wildcats were originally slated to open the Todd Ford era against Burleson Centennial, located in Tarrant County. With the start of Burleson ISD’s football season in doubt, Plano will instead renew its rivalry with McKinney.

The Lions and Wildcats are plenty familiar, having shared a district the past four seasons. McKinney holds a 3-1 edge over that span, but Plano got the better of the rivalry’s 2019 installment in a wild 56-49 shootout that spanned two days due to inclement weather.

“We were fortunate to grab them and I think they were fortunate to get us. If you have to travel, especially in the times that we’re in, you’d rather it be a short trip,” Ford said. “It’s not too far to get up there. Tarrant County made the decision for us on Burleson and we had to find someone for Week One, but everything else stayed the same.”

The Wildcats also have meetings with Rowlett and Lake Highlands lined up before diving into 6-6A action, plus a Sept. 17 scrimmage against Heath.

Elsewhere in the district, Hebron only had to make one change to its schedule — swapping a Week Two bout with Arlington Martin for another high-profile opponent in Cedar Hill, which sports one of the top quarterbacks in the state in Tennessee commit Kaidon Salter. That game will take place Oct. 2 at “The Woodshed.” The Hawks also have non-district matchups with Denton Guyer (Sept. 25 at home) and Northwest Eaton (Oct. 8 on the road).

Following each team’s three non-district games, the entire district will be afforded a bye week on Oct. 16 before beginning the conference slate on Oct. 23 — an approach voted on by the 6-6A coaches.

“We wanted to keep it as uniform as possible. We did meet as a district and will do so again, but I think the overriding theme from the meeting was that our kids have worked really hard and they deserve to have 10 games on the schedule,” Ford said. “We want to do everything we possibly can to assure that.”

The coaches also discussed a tiebreaker for any games that are cancelled due to the COVID-19 pandemic.

“Let’s say you and I are both 3-3 and we don’t get to play because our game got cancelled because one of us got shut down by the superintendent or the CDC. What happens then?” Odle said. “We’re going to take mutual opponents and have a plus-minus point differential and decide it that way. It’s not a perfect scenario, but we think it’s better than a coin toss.”

“We wanted to keep it as uniform as possible. We did meet as a district and will do so again, but I think the overriding theme from the meeting was that our kids have worked really hard and they deserve to have 10 games on the schedule.” -Todd Ford, Plano Senior head football coach