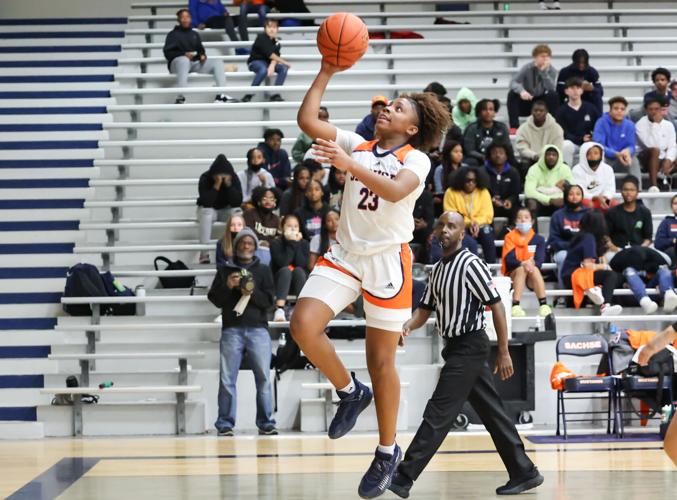 Crislyn Rose and the 9-6A champion Sachse girls basketball team were one of the highlights for the Mustangs athletics program in 2021-2022. 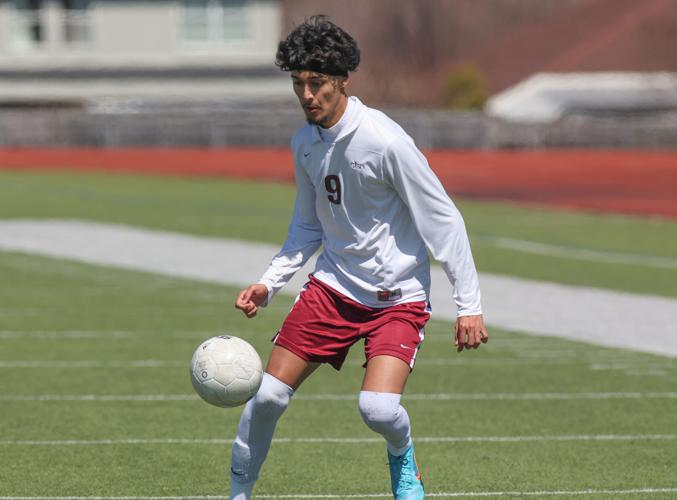 The Rowlett boys soccer team was the lone Eagles squad to claim a district championship during the past year.

Crislyn Rose and the 9-6A champion Sachse girls basketball team were one of the highlights for the Mustangs athletics program in 2021-2022.

The Rowlett boys soccer team was the lone Eagles squad to claim a district championship during the past year.

Rowlett and Sachse feature two of the most well-rounded athletic programs in the area, having won district championships in a multitude of sports.

While both programs were solid once again, it was the Mustangs and Wylie who took center stage in 9-6A in 2021-2022, winning at least a share of the district championship in five of the eight standings-based sports and earning playoff berths in 14 of 16 opportunities.

But the past school year was also more balanced than it has been recently, with five different schools winning district championships and seven of the eight qualifying for the playoffs in at least one sport.

So, when the dust settled, which 9-6A school's athletic department fared the best during the past year?

For the sake of this comparison, The Rowlett Lakeshore Times looked at how each team did during their respective 9-6A seasons, as well as at the district cross country and track and field meets.

There was no additional credit given to playoff success, nor were tiebreakers/play-in games factored in.

In each sport, teams were awarded points based on their finish in district play (8 for first place, 7 for second place, etc.).

In addition, only sports that had full participation were counted, meaning swimming, golf and tennis, among others, were not factored in because one or more schools did not field a team.

Given that criteria, it boiled down to a two-team race and it was Wylie who was able to edge out Sachse to claim the unofficial title of 9-6A all-around champion for the 2021-2022 school year.

Here is the breakdown:

Since joining the Garland ISD district in 2018-2019, Wylie has been a major factor in sports across the board and this year, it did enough to claim the unofficial championship.

The Pirates started with the volleyball team earning a runner-up finish, and though the football team was edged out on a tiebreaker, it would be one of only two sports in which they were not represented in the postseason.

Wylie is traditionally strong in cross country and that was once again the case, as the boys took home the 9-6A championship, sweeping the top four spots led by Nathanael Berhane, and the girls finished second, with Liv Lambert capturing the individual title.

The Pirates were also solid on the basketball court, with both the girls and boys making the playoffs.

Wylie’s first 9-6A championship in a standings-based sports came courtesy of the girls soccer team. Led by most valuable player Morgan Brown, defensive MVP Regan Venditto, co-goalkeeper of the year Caleigh Monroe and newcomer of the year Jadyn Leblond, the Pirates posted a perfect 14-0-0 record, allowing two goals in the entire district season.

Wylie continued its run in track and field, where the boys won the 9-6A title and the girls finished second.

And the Pirates finished with a bang.

Coach of the year Heather Damron, pitcher of the year Jordyn Merrett and defensive player of the year Aubrey Brown guided the Pirates to an undefeated district championship in softball.

And at the same time, the Wylie baseball team was also doing what it needed to in a crowded district race, as it found a way to earn a share of the district title, and that finish actually allowed the Pirates to overtake Sachse for the all-around championship.

The Mustangs have been a regular atop the standings in this challenge over the years and it was once again in contention for the unofficial crown.

Sachse had six of its eight teams qualify for the playoffs in standing-based sports and won four district championships.

The Mustang girls have been particularly recently and that was once again the case, as they finished no lower than second in any of the six sports considered for this competition.

The volleyball team set the tone in the fall, dropping only one set en route to an undefeated district championship.

The Mustangs put together another successful campaign on the gridiron, where the football team made the playoffs for the seventh season in a row and 10th time in the last 11 years.

At the district cross country meet, individual runner-up Anna Eischen led a group of seven Sachse runners in the top 10 as it ran away with the 9-6A title, while the boys also had a solid effort in third.

The girls basketball team picked up where the volleyball team left off, as head coach Donna McCullough, most valuable player Crislyn Rose and first-teamers Neenah George, Londyn Oliphant and Charish Thompson led the way to another district championship.

The Mustangs won every game by at least 16 points as it reclaimed its district title after a one-season absence, winnings its eighth crown in the last nine seasons.

Both Sachse teams were strong on the pitch, as each finished in second place to return to the playoffs.

The Mustangs added another district title at the 9-6A track and field meet, as Kennedy Swann won four gold medals, Lazariah Bethany and Favor Anyanwu each claimed two, Madeline Herrera added another Sachse also added a pair of relay victories to run away with the team championship.

The Sachse boys track and field team also had a solid outing, as it finished third in the team standings, while the softball team capped the season with a runner-up finish.

The Owls edged out Rowlett by one-half point to finish third in the overall rankings.

Garland captured a pair of 9-6A championships and had six of eight teams qualify for the playoffs.

After the volleyball team set the tone by making the playoffs, the football team brought back memories of the golden years, as it won the district championship for the first time since 2012.

Garland won every game by double digits to complete its first undefeated regular season since 2002 before getting stunned by Tyler Legacy in a 41-40 bi-district thriller.

The Owls enjoyed similar success on the basketball court as the boys earned the 9-6A championship in dominant fashion.

Behind district most valuable player Zuby Ejiofor, the 6-8 post who signed with Kansas, coach of the year Randy Love and all-district honorees King, Joshua Valiaveedu and Chukes Ejiofor, Garland won every game but two by double figures en route to the undefeated 9-6A title and it would go on to advance to the regional championship game before falling to Duncanville.

Though that was the last of the district titles, the Owls’ program was consistent through the spring, with the boys soccer, softball and baseball teams all qualifying for the playoffs.

The Eagles, who have won this unofficial challenge before, were edged out of the third-place spot by a half-point.

Rowlett won only one 9-6A championship, but did have six teams qualify for the playoffs.

A year ago, the volleyball team had its Garland ISD record run of 23 consecutive playoff appearances, a streak that started back in 1997, come to an end.

Determined to start a new streak, the Eagles battled down to the wire and then won a play-in match to earn a postseason berth.

Rowlett picked up points in boys cross country, as a top-10 finish from Jeremiah Evans helped them finish as the 9-6A runner-up behind Wylie.

The highlight of the year came on the pitch.

The girls finished third in the standings to claim a playoff berth for the 19th consecutive season.

The boys did them one better.

Rowlett finished the school year on a high note, as well, as softball team made the playoffs for the 17th straight season and the made it for the 22nd season in a row.

The Rangers had a solid all-around season, particularly on the boys side, which finished in the top three in four different sports.

That started on the gridiron, where the football team qualified for the playoffs for the sixth straight season.

Naaman Forest added a playoff team with a third-place finish from the boys basketball team.

After getting shut out on the pitch, the Rangers were strong at the district track and field meet, where the boys took second and the girls were third.

Naaman Forest closed on a high note, as most valuable player Jaden Flores, offensive player of the year Jason Flores and newcomer of the year Xavier Mitchell helped lead the baseball team to a share of the 9-6A title.

The Patriots were competitive in nearly every sport, but often times found themselves on the outside looking in at the playoff picture by just a game or two.

Lakeview was edged out of the volleyball playoffs on a tiebreaker, but did find success on the basketball court, where both the girls and boys qualified for the playoffs.

The girls soccer team joined the postseason party with a fourth-place finish and the girls track and field team placed fourth at the district meet, but the year would end the way it began, as the softball and baseball teams finished a spot or two out of the field.

Though the Raiders were shut out in the district championship department in 2021-2022, the football team did provide one of the biggest moments for Garland ISD.

With a 30-14 victory over Wylie in the regular season finale, North Garland earned a playoff berth for the first time since 2009.

The Raiders finished fourth in boys cross country and fifth in girls track and field, but the other big moment was provided by the boys soccer team, who placed third to claim a spot in the postseason field.

As one of the smaller schools in the district, it was a tough overall year for the Titans, as they did not have any teams qualify for the playoffs.

Among the highlights, the boys cross country and track and field teams each placed fifth and the girls soccer team contented for the playoffs before coming up just short.

Do you have a news tip?

We're always interested in hearing about news in our community. Let us know what's going on!

Have the latest Rowlett Lakeshore Times news delivered right to your inbox!

Check your email for details.

Submitting this form below will send a message to your email with a link to change your password.

An email message containing instructions on how to reset your password has been sent to the e-mail address listed on your account.

Your purchase was successful, and you are now logged in.

A receipt was sent to your email.