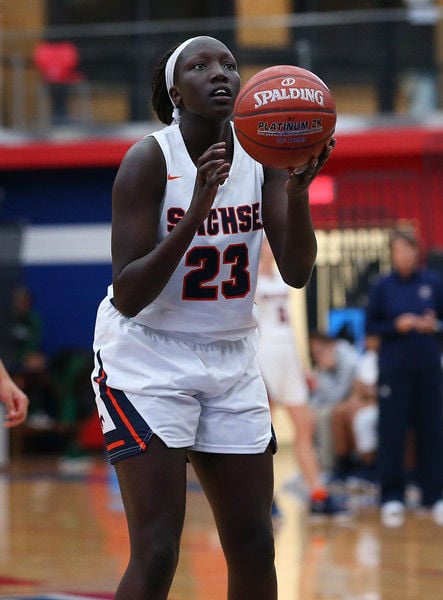 Adhel Tac and Sachse enter the season as the favorite to win the 10-6A championship. 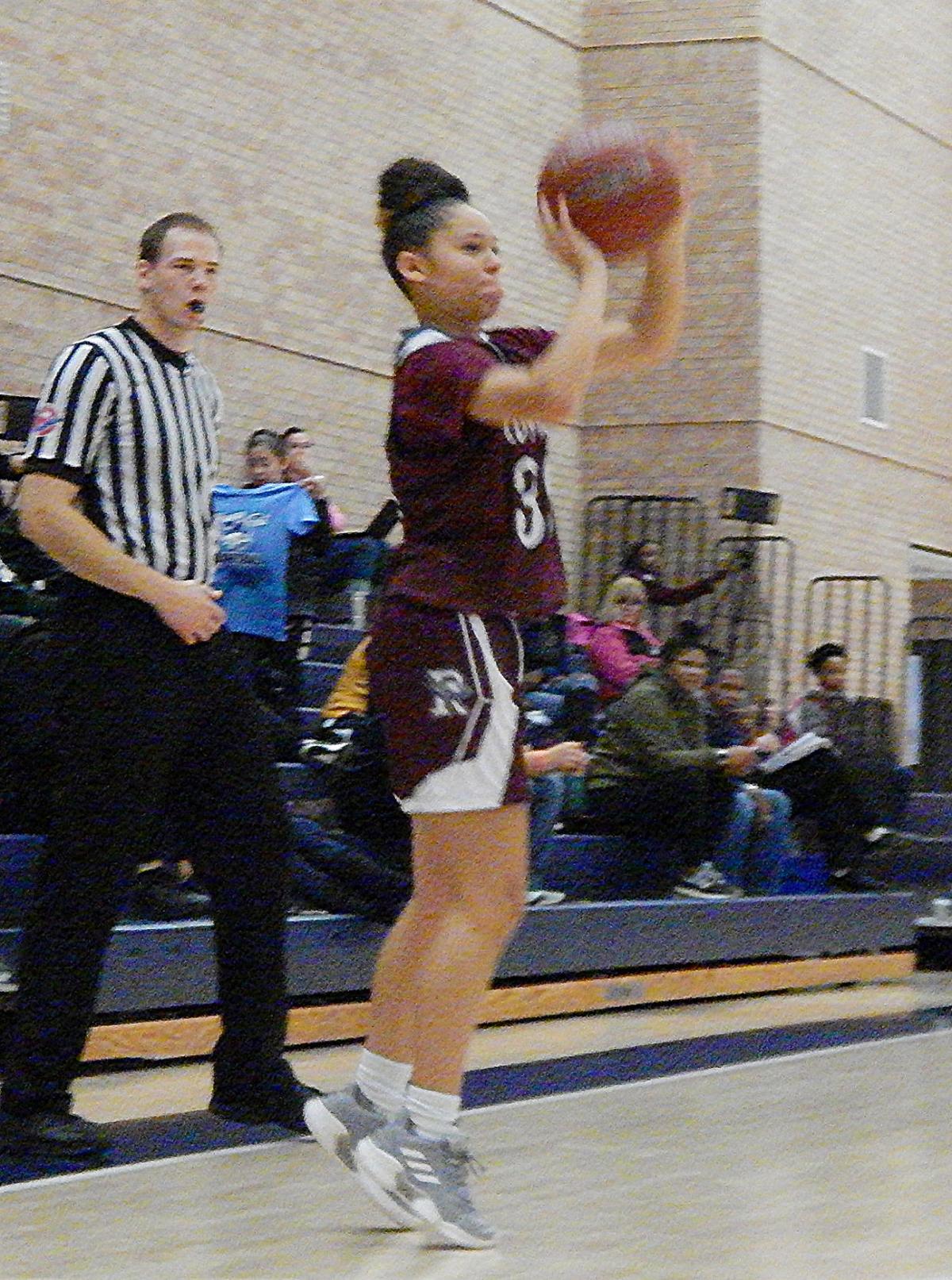 Mallorie Miller and Rowlett are hoping to return to the playoffs.

Adhel Tac and Sachse enter the season as the favorite to win the 10-6A championship.

Mallorie Miller and Rowlett are hoping to return to the playoffs.

Few teams have dominated their district rivals like the Sachse girls basketball team has done in 10-6A in recent years.

Last season, they outscored their district opponents by an average margin of 41.5 points per game en route to extending their 10-6A winning streak to 55 victories in a row.

The Sachse players said their goals for the season are simple—to continue what the teams before them started.

Many expect that trend to continue and the Mustangs were picked to finish first in the Texas Association of Basketball Coaches preseason poll.

But nothing is given away for free and Sachse understands it is going to have to work hard to defend its status with hungry teams such as Rowlett, Lakeview and Wylie hoping to ascend to the top of the 10-6A mountain.

“Sachse is always going to be a good, well-rounded team,” Rowlett head coach Alexis Hill said. “I’ve also been impressed with how Lakeview has looked with their new coach, they seemed to be more disciplined and they are always athletic. Wylie has had some ups and downs with some injuries, so I think it is going to come down to those four (with Rowlett), but you can’t sleep on anybody, so it is going to be one of those seasons where you have to be ready to play every night.”

The Mustangs sent a message last week by winning the championship at the Curtis Culwell Invitational, an event that included all seven Garland ISD teams. They put an exclamation point on the title by defeating Lakeview in the finals.

Sachse entered the season with perhaps more questions than they have at any other point during this run.

The Mustangs were then dealt a big blow when point guard Jayla Brooks, a SMU-signee who was the 10-6A offensive player of the year last season, suffered a season-ending injury.

That is three big pieces to replace, but the cupboard is not bare.

Senior guard Tia Harvey is coming off a big weekend that saw her earn tournament MVP honors. Harvey was the defensive player of the year last season. In addition to recording 2.8 steals per night, she was also a big part of the offense, with 9.6 points, 4.0 rebounds and 1.8 assists per game.

Senior Adhel Tac, who has signed with TCU, was a first-team honoree who averaged 10.4 points on 58 percent shooting, 5.9 rebounds and 1.4 steals per game.

The 6-1 Tac is part of a formidable interior group that includes 6-1 junior Elizabeth Woods, who earned second-team honors after scoring 4.2 points and grabbing 3.8 rebounds per game, as well as 6-2 junior Sierra Douglas.

Junior Brianna Salazar has helped fill the void left by Brooks in handling the ball and juniors ShaNyais Rose and Morgan Mundy and freshman Journee Chambers have also contributed in the back court.

Freshman Crislyn Rose could be the player to watch, though. Rose was a standout in the tournament final on Saturday, as she tallied a team-high 18 points, combining good range from the outside with the ability to also penetrate to the basket.

The Eagles, who were picked fourth in the TABC preseason poll, might not have the prettiest record, but have challenged themselves against some top competition during the first month.

Rowlett had to replace its emotional leader in Ngozi Obineke, who was the co-most valuable player a season ago, but returns a solid nucleus.

That includes a first-team honoree in sophomore Nevaeh Zavala, who made an immediate impact last season, recording 8.6 points, 5.9 rebounds, 2.0 steals and 1.0 blocks per game.

Zavala, a 6-0 forward, missed some time due to volleyball and illness, but turned in a strong performance last week.

Rowlett has a pair of returning senior forwards in Reagan Warren and Madilyn Rodriguez. Warren (7.0 ppg, 4.0 rpg, 1.2 spg) and Rodriguez (3.4 ppg, 3.1 rpg, 1.1 spg) each do a variety of things on the court and they have also stepped into bigger leadership roles.

Senior Mya DeVance gives the Eagles another presence in the post and junior Mallorie Miller is one of the district’s top outside shooters. Seniors Ryllie Booker and Hannah Rumore, junior Taiyana Pitts and sophomore Kendall Miles are among the other contributors thus far in the back court.

If there is a team that can dethrone Sachse, some believe it could be the Patriots, who were picked to finish second in the TABC preseason poll.

Lakeview returned a strong group and hung tough with the Mustangs in the championship game on Saturday before falling, 46-43.

Junior Jaliya Sharp is an interesting player who can make a difference at 6-3 and Alexis Gie is another experienced returner.

The Pirates made the playoffs a year ago and were picked to finish third this season.

Wylie will have an immediate chance to see where they stand when they host Sachse in the opener on Friday.

The Rangers have strung together some early wins, but cannot feel good about losses to district rivals Rowlett and South Garland last week.

Depth might be an issue for Naaman Forest at this point, as they have only eight players on the varsity roster.

The Owls have a nice nucleus to build around. Junior Xyllize Harrison, a 6-4 post, is one of the best interior players in the district and was a first-teamer a year ago. Senior guard Ruth Ajayi was a second-team honoree and seniors Xaria Harrison, Sedalia Huland and Rania Emeir also bring experience.

The Raiders are hoping they are trending upward after showing improvement in several other sports.

The Colonels are another team looking to make strides after enduring some rough times of late, but they do have to be encouraged by knocking off district foe Naaman Forest on Saturday.

Senior Vanessa Wharton, a second-team all-district selection, can be one of the most dynamic scorers in the district and South Garland has also gotten early contributions from seniors Kandace Sutton, Lordes Lara and Jocelyn Bell and sophomore Vanessa Miranda.

Sachse caries a 55-game district winning streak into the start of the 10-6A season.