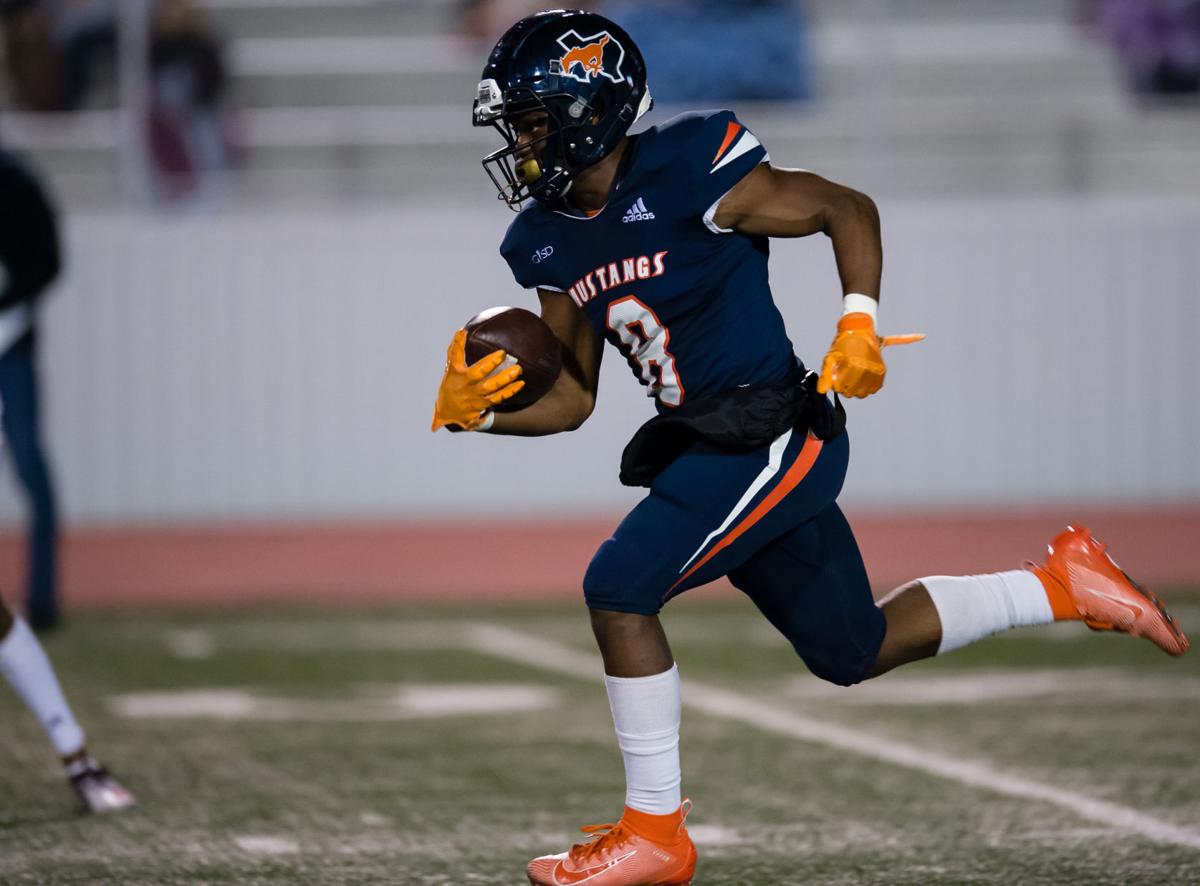 Sachse senior Matthew Carter was named to the 10-6A first team at cornerback and was also a contributor on offense for the Mustangs. 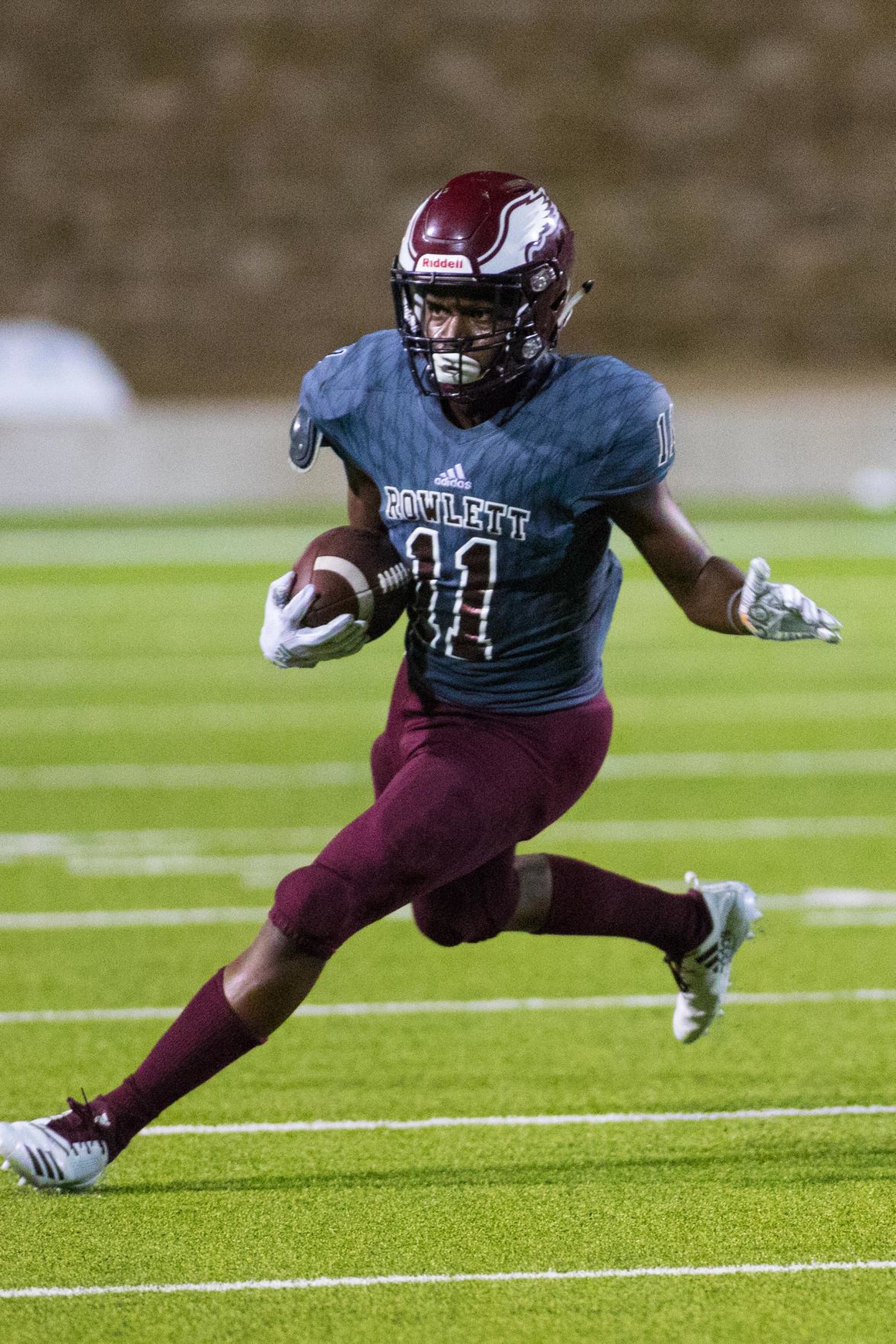 Rowlett senior Trevon King was named to the 10-6A first team at wide receiver and was also recognized on the second team as a kick returner.

Sachse senior Matthew Carter was named to the 10-6A first team at cornerback and was also a contributor on offense for the Mustangs.

Rowlett senior Trevon King was named to the 10-6A first team at wide receiver and was also recognized on the second team as a kick returner.

Sachse and Rowlett have been perched atop the district for much of the last decade, but things were a little different in 2019.

The Mustangs had made the playoffs in seven of the last eight seasons, have posted three undefeated regular seasons and had not dropped a district game since 2015 during their run of three consecutive outright 10-6A championships.

Rowlett carried with it the longest playoff streak in Garland ISD history, having qualified for the postseason every year since 2005.

The Mustangs did not fall far, but their first district loss in four years, a 22-21 setback to Wylie, forced them to share the 10-6A title and relegated them to the second seed in the playoffs, leaving them with a first-round date with powerhouse Allen.

The Eagles, meanwhile, lived dangerously all season long, with five district games decided by two points or less. The last of those, a 42-40 loss to Sachse in the season finale, was part of a wild night that when the dust settled found Rowlett on the outside looking in at the playoffs for the first time in 15 years.

It remains to be seen if this was an aberration or a sign of things to come, but for this year at least, parity was the name of the game in 10-6A.

That was reflected on the all-district team, where the superlative honors and spots on the first two teams were spread out more evenly among the eight teams.

Neither the Mustangs nor the Eagles earned any of the major honors and they combined to land only four players on the first team.

Junior offensive lineman Ricardo Ochoa helped the Mustangs average 329.4 yards per game. Senior cornerback Matthew Carter was the lone selection on the defensive side, ranking among the team leaders with 48 tackles, with one for loss, to go along with six pass breakups and three blocked kicks.

Rowlett had two players on the first-team offense. Senior offensive lineman Tommy Ngo was a unanimous selection as the Eagles averaged 306 yards per game, while senior wide receiver Trevon King had 49 catches for 511 yards and four touchdowns, two of which came in the match-up with Sachse.

The Mustangs had eight players chosen to the second team, while Rowlett earned six second-team nods.

Sachse junior running back Shon Coleman had 201 carries for 1,249 yards, an average of 6.2 yards per carry, with 12 touchdowns. Coleman had four 100-yard games and added 23 receptions for 233 yards and a score.

Sophomore wide receiver Jordan Nabors had 22 catches for 319 yards and three touchdowns and also rushed for 125 yards and a pair of scores, while junior offensive lineman Javion Ellison was also named to the second team.

Senior defensive end Anthony Anyanwu, who recently signed with Baylor, made the second team as he recorded 47 tackles, with 10 for loss, six sacks, one interception, one fumble recovery, one forced fumble, one pass breakup and one blocked kick.

Senior outside linebacker Jordan Brooks had 79 tackles, with seven for loss, with two quarterback hurries, two sacks, a forced fumble and a fumble recovery.

Senior safety Travien Davis also made the second team after recording 36 tackles, with one for loss, to go along with an interception, a forced fumble and a pass breakup.

Rowlett senior offensive lineman Aryan Patel was named to the second team, and King earned a second selection for his work as a kickoff returner.

Senior Darron Loveless was chosen to a pair of second-team honors at cornerback and punt returner. Loveless had a team-high three interceptions and also returned a blocked extra point for a safety.

Lakeview junior running back Camar Wheaton was voted as the 10-6A most valuable player. Wheaton, who is a five-star prospect and the No. 1 running back in the nation for the Class of 2021 according to 247sports, had 189 carries for 1,142 yards and 15 touchdowns, was a solid receiver with 11 catches and also dangerous in the return game.

North Garland senior running back Sabron Woods was selected as the offensive most valuable player after rushing 207 times for 1,349 yards and 25 touchdowns.

Wylie senior outside linebacker Andrew Williams was named defensive most valuable player, as he recorded 81 tackles, with 17 for loss, and seven sacks.

The Wylie coaching staff was also recognized after guiding the Pirates to a share of the 10-6A championship.

Looking ahead beyond Sachse and Rowlett, Lakeview might be the early pick next season as Wheaton and Ellis are among eight all-district honorees who are expected to return.

Garland could be a sleeper as Hudson was joined on the all-district team by fellow sophomores in quarterback Cergio Perez and wide receiver Charles Allen.

On the flip side, Wylie graduates 13 of its all-district selections, while all 11 of North Garland’s honorees are seniors.