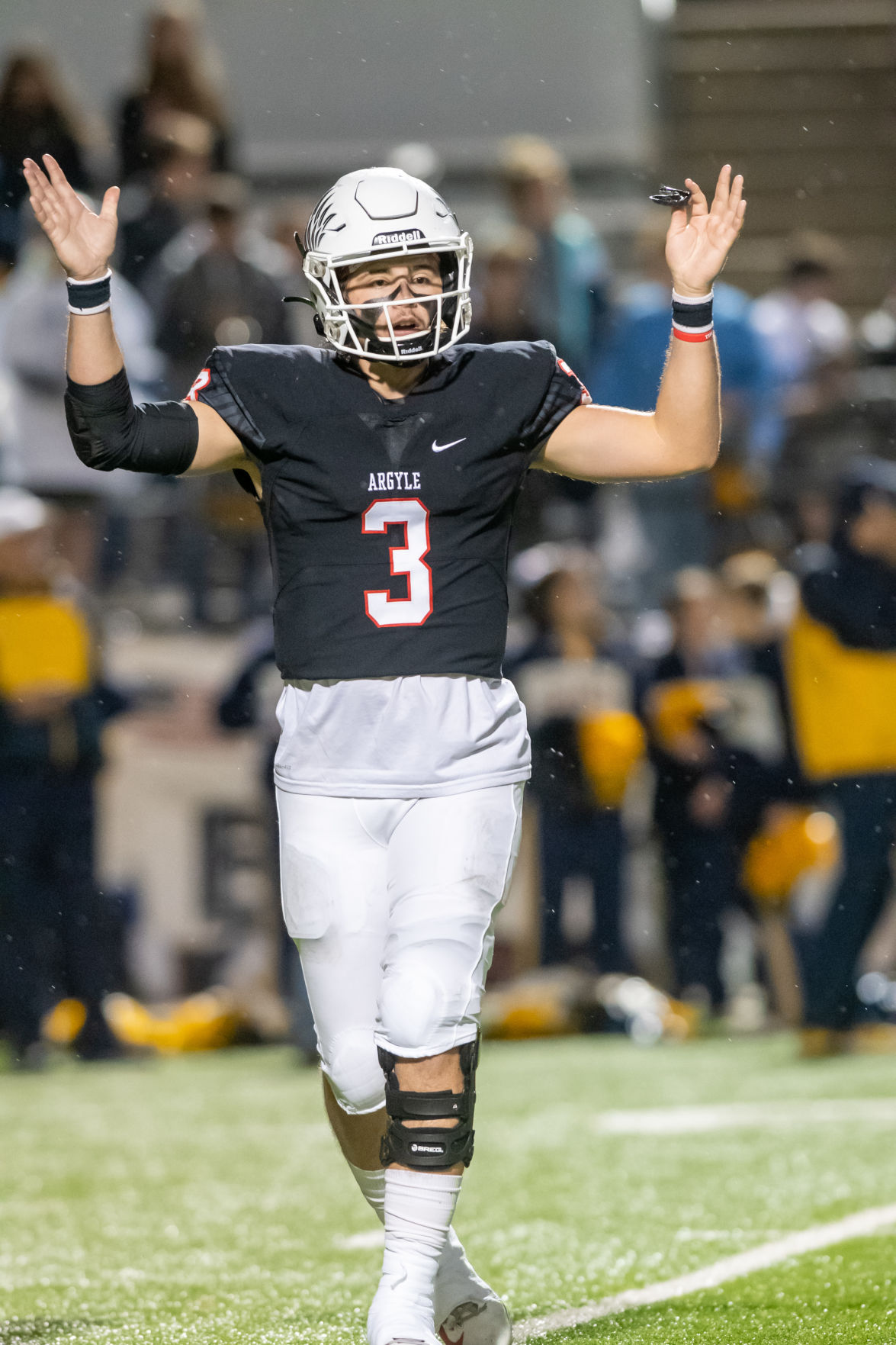 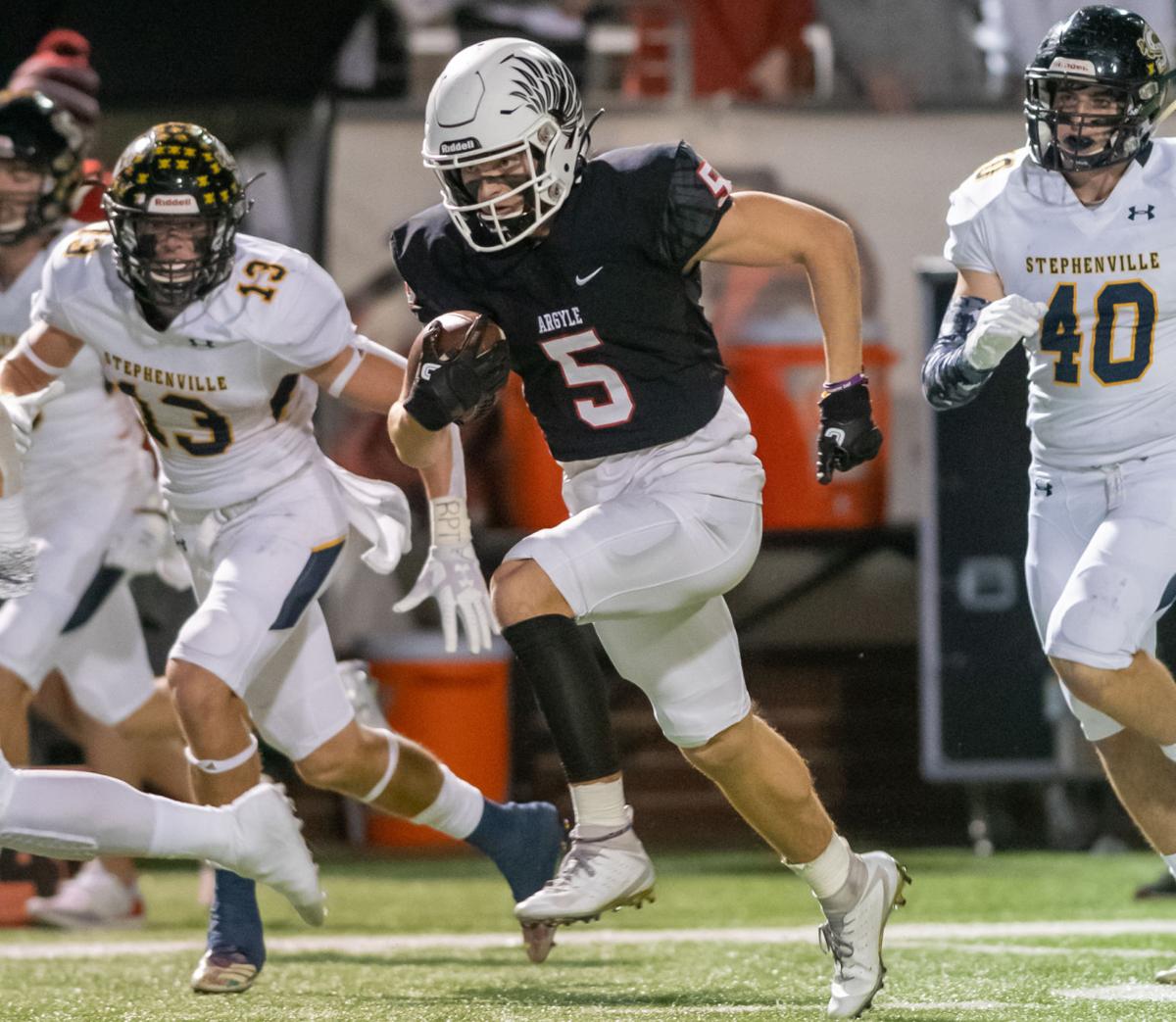 The magic between the Eagles’ vaunted quarterback-receiver combo was just beginning.

Hogeboom threw for eight touchdown passes on Thursday, finding Kirkpatrick for five — including three scores between the two in the fourth quarter — to fend off a game Stephenville bunch for a 63-49 victory from Mansfield’s Vernon Newsom Stadium in the area round of the Class 4A Division I playoffs.

The Hogeboom-Kirkpatrick connection hummed all night long, with the Argyle signal-caller passing for 452 yards on top of his eight scores, while Kirkpatrick snagged 11 balls for 289 yards en route to finding the end zone five times.

The last pass-and-catch between the two helped ice a too-close-for-comfort victory for the top-ranked Eagles, who faced fourth-and-11 from the Stephenville 25 with just under three minutes remaining in the contest. Too close to punt and at the mercy of the rain and wind, the Eagles dialed up the Hogeboom-Kirkpatrick combo one last time for a 25-yard touchdown and a 63-49 lead 2:29 remaining in the ballgame.

“That’s what they look like every week. They’ve done a good job,” said Todd Rodgers, Argyle head coach. “Stephenville tries to roll a safety over the top and do some things like that. When we called the timeout, it was fourth-and-long and we couldn’t punt the ball, so we just decided to throw it in the end zone and see how it turns out.

“[Kirkpatrick] competed for the ball, went up and got it.”

An interception by Argyle senior Jake Sullivan on the ensuing Stephenville possession helped seal a victory laced with momentums swings during a second half that saw the Yellow Jackets rally from a 35-21 halftime deficit to knot the action at 42-42 heading into the fourth quarter.

After trading scores for the first 5:30 of the third quarter, Stephenville notched the tying score after blocking an Argyle punt — returned by Colton Accomazzo 21 yards for a touchdown that knotted the count for the first time since 7-7 in the first quarter.

The Eagles failed to wrest back momentum on either of their following two possessions, which respectively ended in an interception and a lost fumble, but managed to retake the lead with 7:05 left in the contest thanks to the third Hogeboom-Kirkpatrick touchdown of the night — this time on an 18-yard strike for a 49-42 lead.

The score was set up by eight straight runs by sophomore Knox Scoggins, who saw his heaviest workload of the season with 33 carries for 123 yards and a touchdown in relief of senior Luke Farris, who was banged up earlier in the contest.

“We had to hand the ball off,” Rodgers said. “We needed the clock to run and put ourselves in those situations to eat as much clock as possible to help minimize the time that [Stephenville] would need toward the end of the game. It was a strategy that works a lot of the time and helped us out tonight.”

Stephenville didn’t go away quietly, gridlocking the ballgame back at 49-49 with 5:19 left following a highlight-reel, 37-yard scramble-and-throw from quarterback Kade Renfro to Cole Stanley.

Sixteen seconds later, Argyle was back in the end zone on a 66-yard bomb down the left sideline from Hogeboom to Kirkpatrick.

“Cole is one of those dudes who just has it. He can make any play on the field and run any route,” Hogeboom said. “Also, throwing it to [Alex Gonzales] and [Cade Merka], plus Knox up the middle, it just opens up Cole so much more so you can’t just pay attention to him. You have to pay attention to everyone.”

Overall, the Argyle offense exited Thursday’s game with 635 yards versus 459 for Stephenville. In addition to Kirkpatrick, Gonzales had a productive night out wide with eight catches for 95 yards and two touchdowns and sophomore Hayden Stewart also caught a touchdown pass.

Those scores contributed to a five-touchdown first half through the air for Hogeboom, which matched the quarterback’s total from Argyle’ 42-14 rout of Stephenville during the opening week of the season on Aug. 30. The Yellow Jackets offered much more resistance this time around, with Renfro passing for 279 yards and totaling four touchdowns, and running back Kason Phillips logging 152 yards on the ground.

“We’re very young in some areas. We started the year with eight new kids and five aren’t with us right now,” Rodgers said of his defense. “We’ve got to continue to get better and coach them up. We’ve got Thanksgiving break to do that, so a longer time to work on some fundamentals and strategies for them to get them ready for the next week.

“They rose to the occasion in the rain storm and stopped [Stephenville] when they needed to.”

The end result stakes top-ranked Argyle in the regional semifinal round of the postseason for the 11th consecutive year. There, they’ll get the winner of Alvarado-Brownwood at a time and place to be determined.