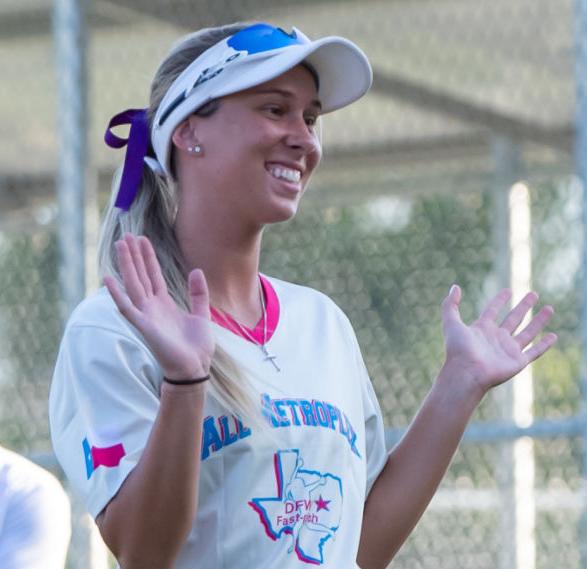 The Colony alum Jacee Hamlin, a Texas Tech signee, waves to the crowd after being introduced at Warren Sports Complex in Frisco prior to the start of the DFW FastPitch All-Star Game on Tuesday. 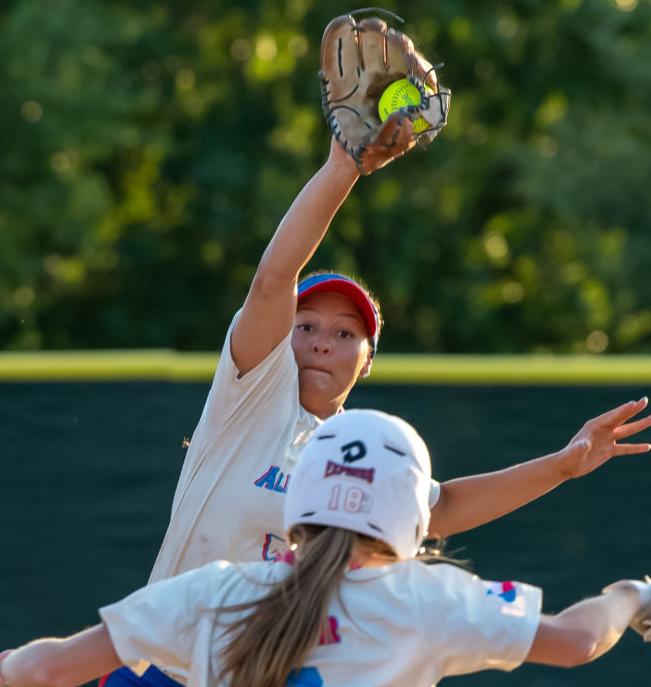 The Colony alum Jayda Coleman, an Oklahoma signee, jumps in the air and attempts to apply the tag on a runner during one of three games in the DFW FastPitch All-Star Game in Frisco on Tuesday.

The Colony alum Jacee Hamlin, a Texas Tech signee, waves to the crowd after being introduced at Warren Sports Complex in Frisco prior to the start of the DFW FastPitch All-Star Game on Tuesday.

The Colony alum Jayda Coleman, an Oklahoma signee, jumps in the air and attempts to apply the tag on a runner during one of three games in the DFW FastPitch All-Star Game in Frisco on Tuesday.

FRISCO — Next year, Oklahoma signee Jayda Coleman and Texas Tech signee Jacee Hamlin will be in opposite dugouts.

They will do battle in the Big 12 for the next four years.

Coleman will look to help the Sooners capture a fifth national championship for head coach Patty Gasso while Hamlin will provide another offensive weapon to a Red Raider team that finished with a 17-9 record and won seven consecutive games before the COVID-19 pandemic forced the cancellation of the remainder of the 2020 season.

On Tuesday, they put that future rivalry aside as they were among 69 players throughout the Metroplex rostered for the DFW FastPitch all-star game, which was comprised of seniors selected for the outlet’s all-Metroplex senior team. Players were divided into six teams coached by staffs from Independence, Flower Mound, Allen, Keller, Grapevine and Denton Guyer. Tuesday’s event, held at Frisco’s Warren Sports Complex, featured a home-run derby followed by a series of all-star games between the six squads.

It afforded players one last chance to represent their high schools.

“I think they did an amazing job,” Hamlin said. “With the home run derby and just being able to get everybody together in such a weird time for everyone, they did a really good job, because I miss seeing all of these girls.”

Hamlin played in left field for the Grapevine team, finishing with a single and coming within inches of crushing a home run over the left-field fence in another at-bat.

On the adjacent field, Coleman pitched in a relief role for the Keller-coached team and was later moved to shortstop. It was her bat that made the most noise on this night. She doubled in a run and homered in her final at-bat, punctuating a legendary high school career.

“It was an awesome time getting to see all of these high school players for one last time,” she said. “And my last at-bat was a home run, so that was nice. Everyone was just relaxed, having fun and joking around. A lot of hugging and tears, but it was an awesome way to end my high school career.”

Hamlin tallied a .463 batting average with 20 runs to go along with five doubles, and for her high school career in left field, committed just seven errors on 770 total chances for a .991 fielding percentage.

The Colony had a record of 111-21-3 during Coleman and Hamlin’s four years in a Lady Cougar uniform. More importantly, the two helped lead the team to its first state championship in 2017.

In the meantime, Hamlin is participating in summer tournaments with her club team, Impact Gold, while Coleman is getting her swings in with Texas Glory.

“It’s definitely going to be fun (playing against Coleman in college),” Hamlin said. “I know that we’re going to mess with each other a lot. I’m excited to see what it’s like when we get up there.”