Samuel Akisanmi holds up a check after he and fellow students Wesley Brewer, Jacqueline Hernandez and Giselle Porras, won $4,000 at Lewisville High School’s Pitch Night as part of the school’s incubator program. 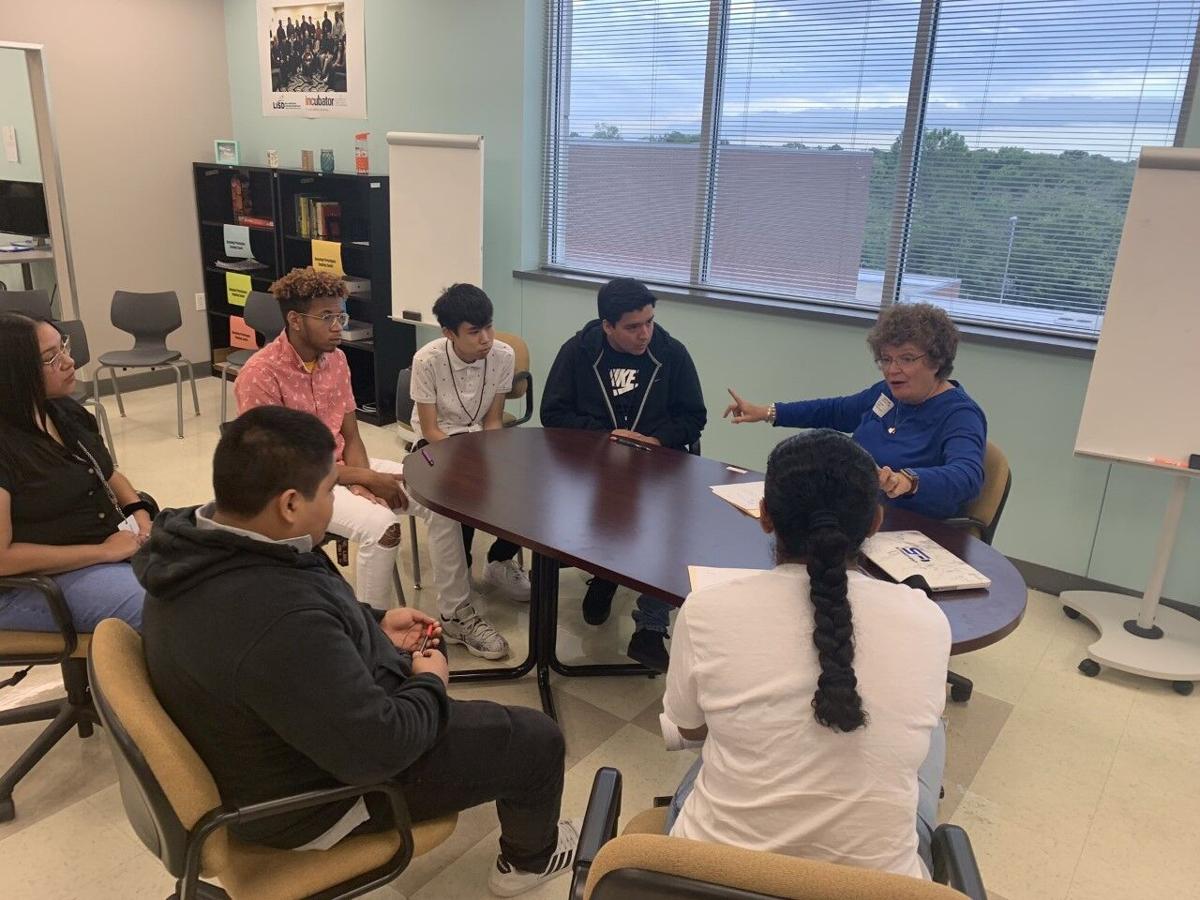 Students in The Colony who have an idea for the next big thing will soon learn how to make it happen.

Beginning in the fall of 2021 The Colony High School will be home to the second Lewisville ISD INCubatoredu program.

Much like the program at Lewisville High School, the instructor and guest speakers and mentors will teach students about all things business – patents, market research, business law, how to be successful and more.

Students will also be charged with coming up with an idea for a product, and mentors will meet with groups of four students to guide them through the process.

“Their goal is to let the students come up with the ideas and not to suppress any thoughts, but to guide them through what they are thinking to make sure they are heading in the right direction,” said Jason Cooper, LISD’s executive director of career and technical education (CTE).

Cooper said at the end of program, student teams will present an idea, whether it be a product or a service, to a board of investors on Pitch Night in hopes of receiving prize money and seed money to further their product.

Cooper said one of the previous winning proposals at LHS was a heated poncho.

He said ideas often evolve throughout the year.

“One group started with a massaging toilet seat, and they ended with sanitizing wipes,” Cooper said. “We’ll get some wild ideas in the fall, and then they hone in on them after they do the research and the market analysis.”

Cooper said students in LISD have already shown that they can be entrepreneurs regardless of their age. He pointed to the third-grade marketplace program where students pitch their ideas of a new product to their classmates.

“If we can do this in third grade,” Cooper said, “why not keep it going?”

The course is for one period, and it lasts all year. Students will receive two credits upon completion.

Cooper said the program at LHS has been successful, and the district wanted to tap in to more students’ potential.

“We want to capture their entrepreneurial mindset,” Cooper said. “Something we’ve learned is that with as many opportunities that we have in CTE, these kids are talented, and they’re wise beyond their years with technology. We want to give them a place to present their ideas and collaborate.”

Cooper said based on the success at LHS the district reached out to other chambers of commerce, rotary clubs and other community leaders to gauge interest. He said leaders in The Colony “stepped up and wanted it.”

The city of The Colony and The Colony Chamber of Commerce are working with the district to make the program a success.

“The city found great value in having this program in the city limits,” said Jennifer Ondreyka, director of events and operations at the chamber. “We were very open to explore this. We felt like the growth in The Colony could sustain this program.”

“We’re a big supporter of The Colony High School, their programs and their staff,” said Joe Perez, director of community relations and programming for the city. “This is about preparing the next generation and getting them to think in these terms as early as possible.”

Ondreyka said while the chamber itself isn’t putting money into the program it is reaching out to businesses to help with funding or mentorships.

Ondreyka said the chamber has hosted multiple information sessions to the business community about the program and how it benefits local companies.

“The next generation is where their business will be down the road,” Ondreyka said. “The value of this is investing in the students who will be working for their business.”

Ondreyka said many of the backers for this project have been woman-owned businesses who have expressed a desire to share their experiences with the students.

She said businesses from outside of The Colony have stepped up as well.

Cooper said the continued development in the city makes the program’s future promising.

“In conjunction with Grandscape – with Nebraska Furniture Mart and Scheels – they thought it was perfect timing,” Cooper said. “We got enough volunteers and commitment. With as much as Grandscape is growing, this is going to be neat.”

Ondreyka said the $25,000 goal has been met as local businesses donated $3,000 to the program Wednesday.

Cooper said partnerships with the business community are key in the incubator’s future, both in the grants they can provide to offset costs and for their expertise. For example, when LHS began its program it partnered with Mary Kay, which provided grant funding.

“The goal is to get partners to come in for volunteering efforts and funding,” Cooper said.

The district is accepting registration for the program and is finalizing details and reconfiguring space inside TCHS.