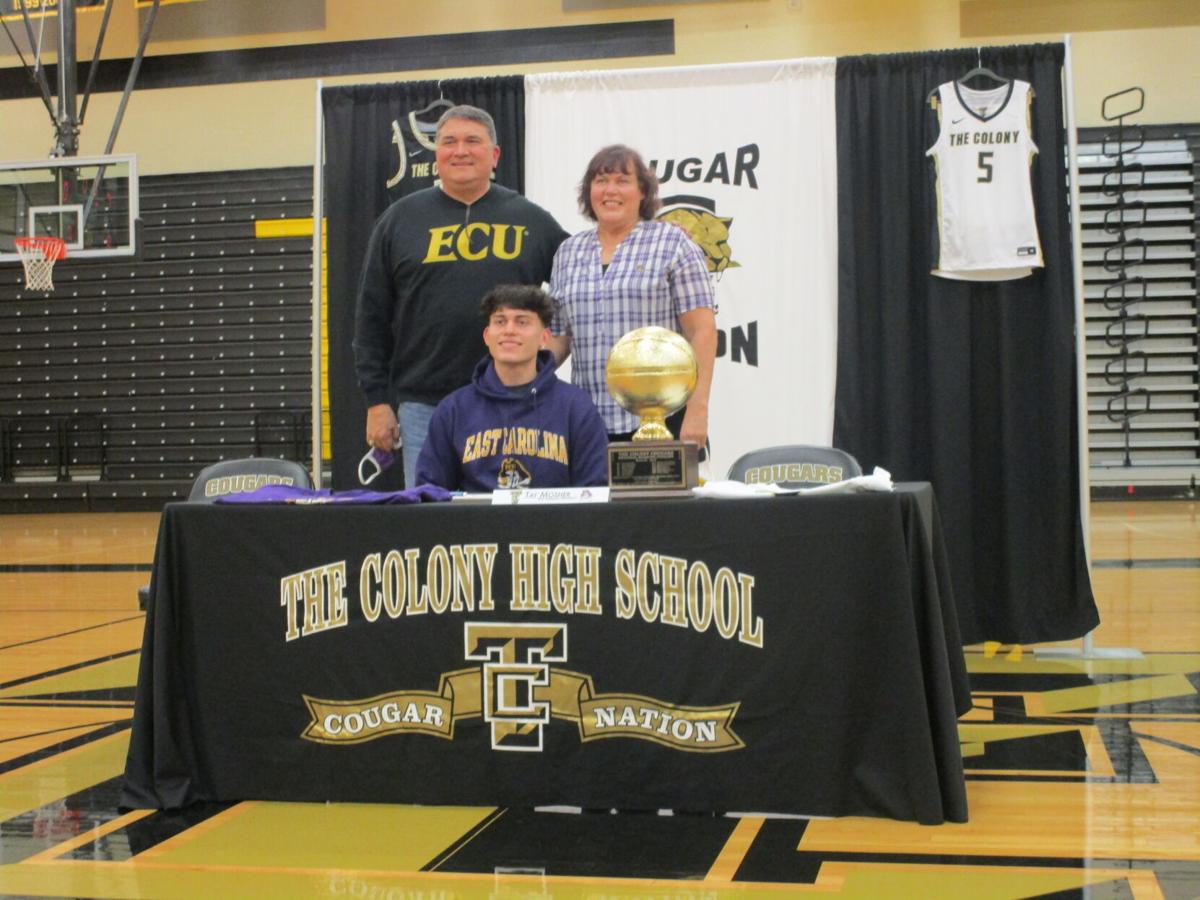 The Colony senior Tay Mosher signed his National Letter of Intent to play men's basketball for East Carolina University on Wednesday. Accompanying him are his parents Joe and Susan. 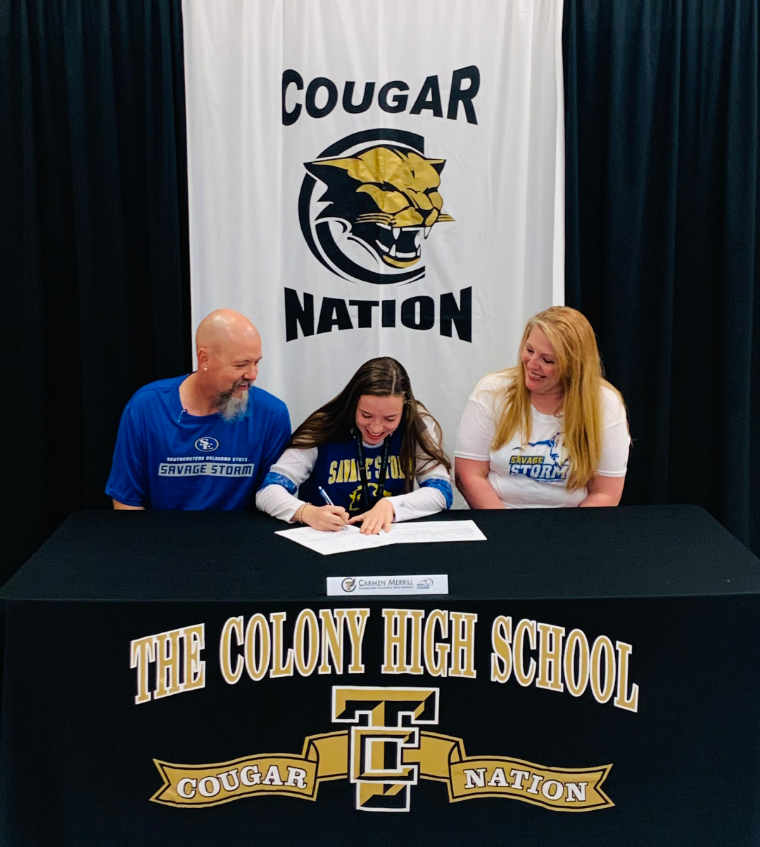 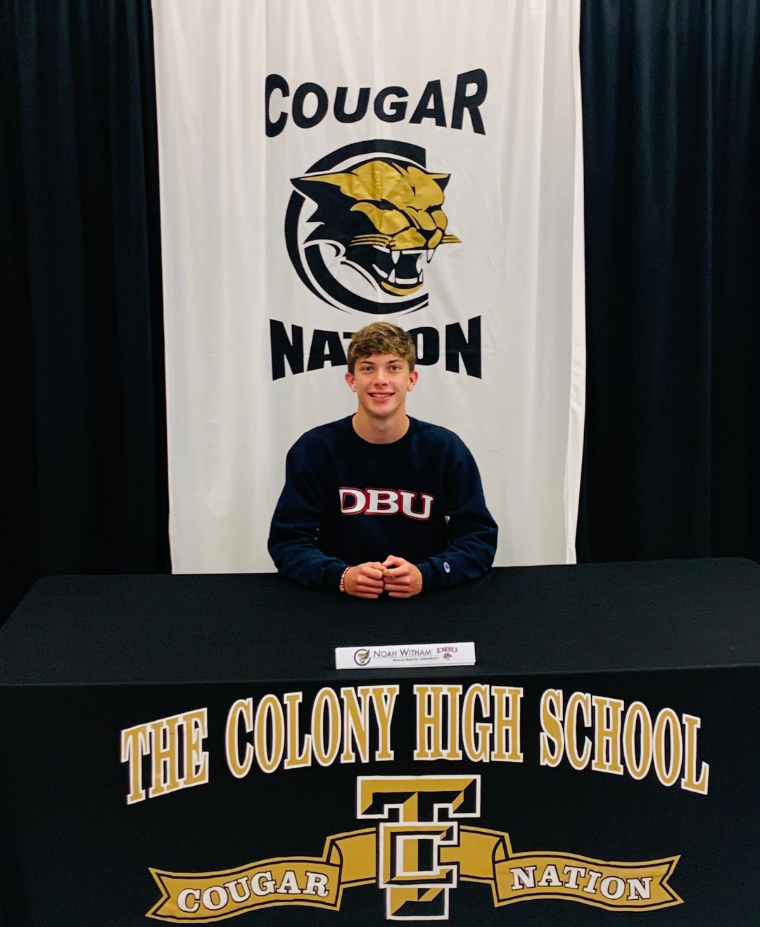 The Colony senior Noah Witham signs with Dallas Baptist University on Wednesday for cross country and track and field. 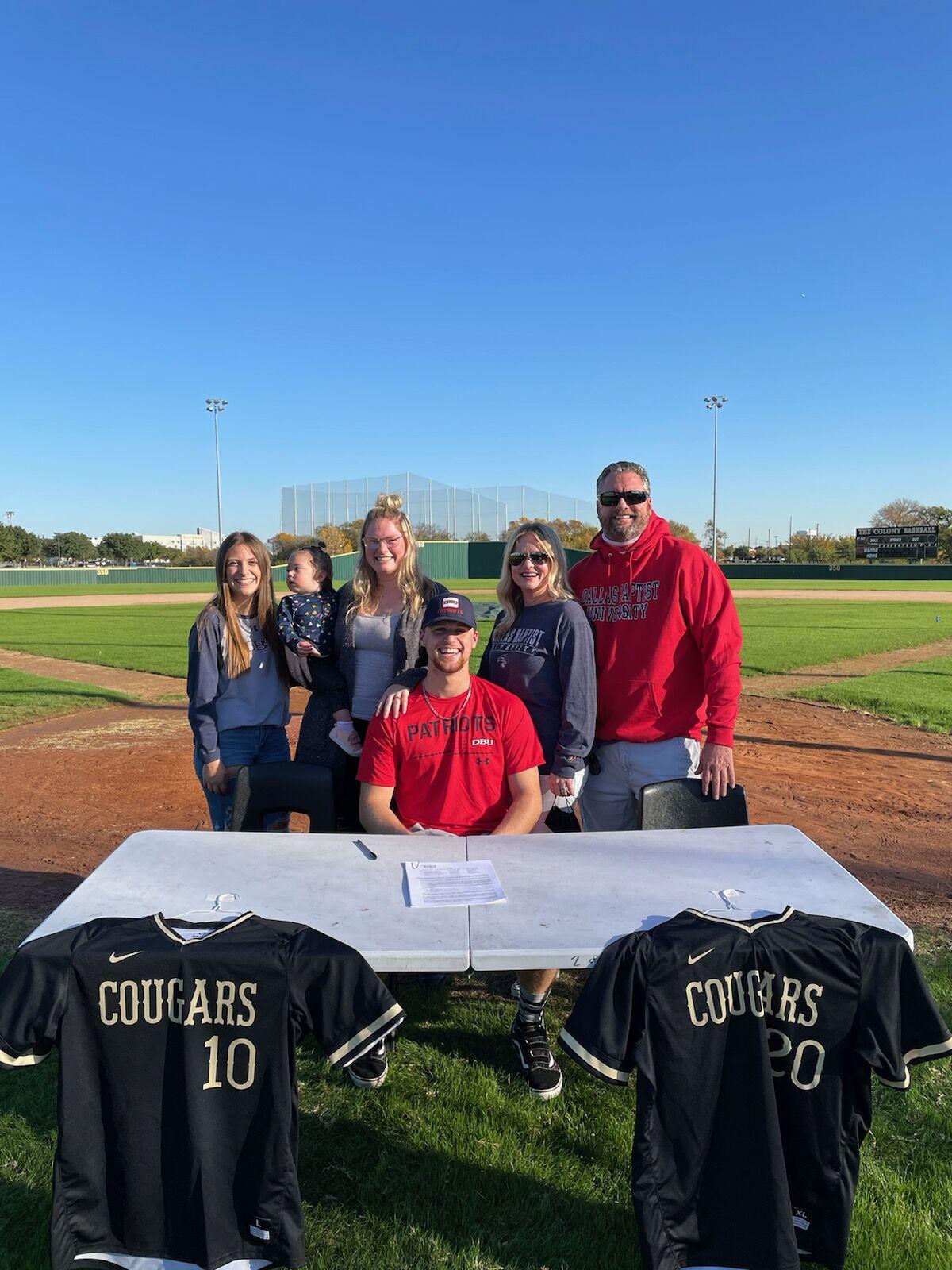 Accompanied by his family, The Colony senior Ryan Scott signs his letter of intent to play baseball for Dallas Baptist University 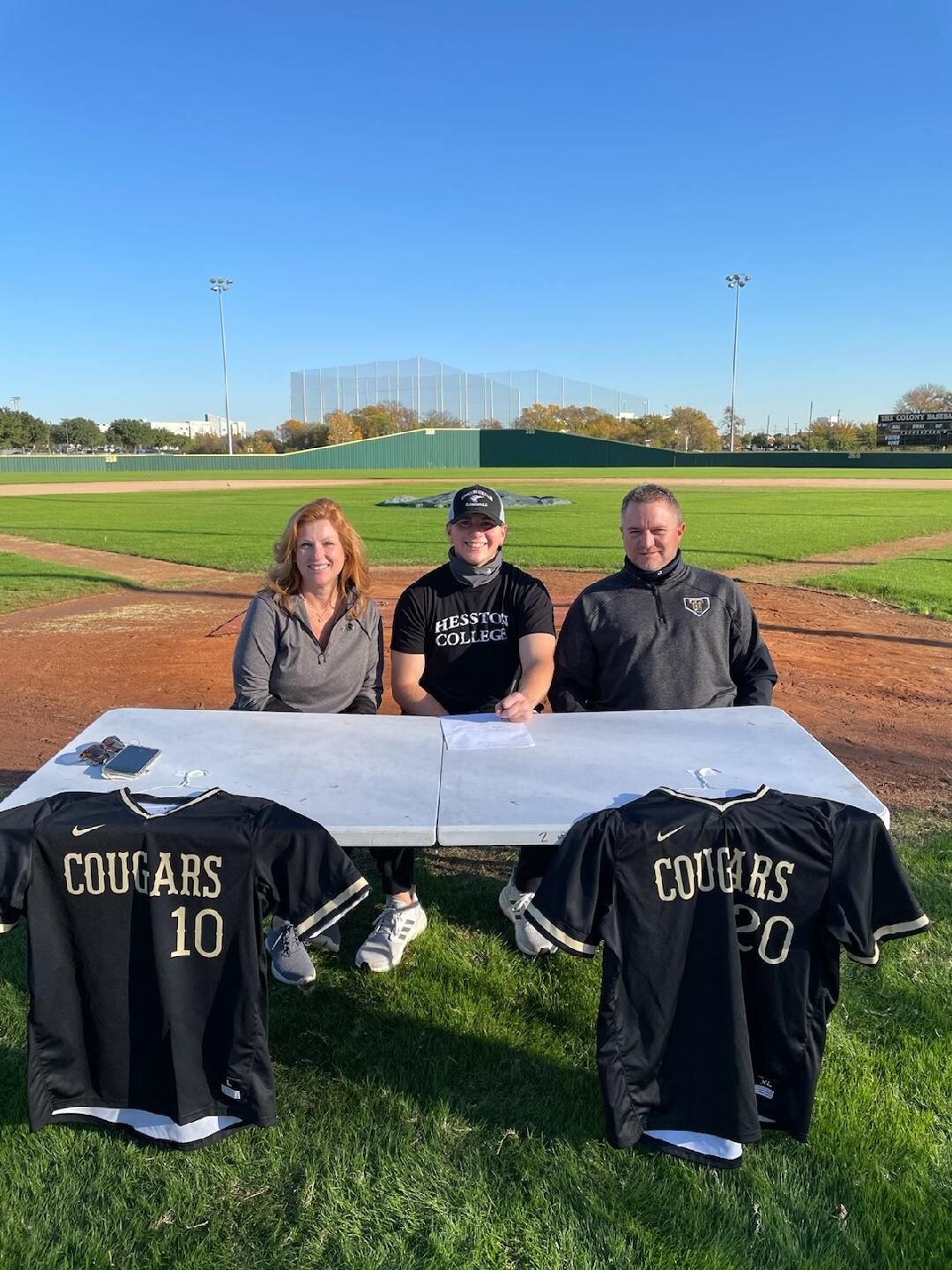 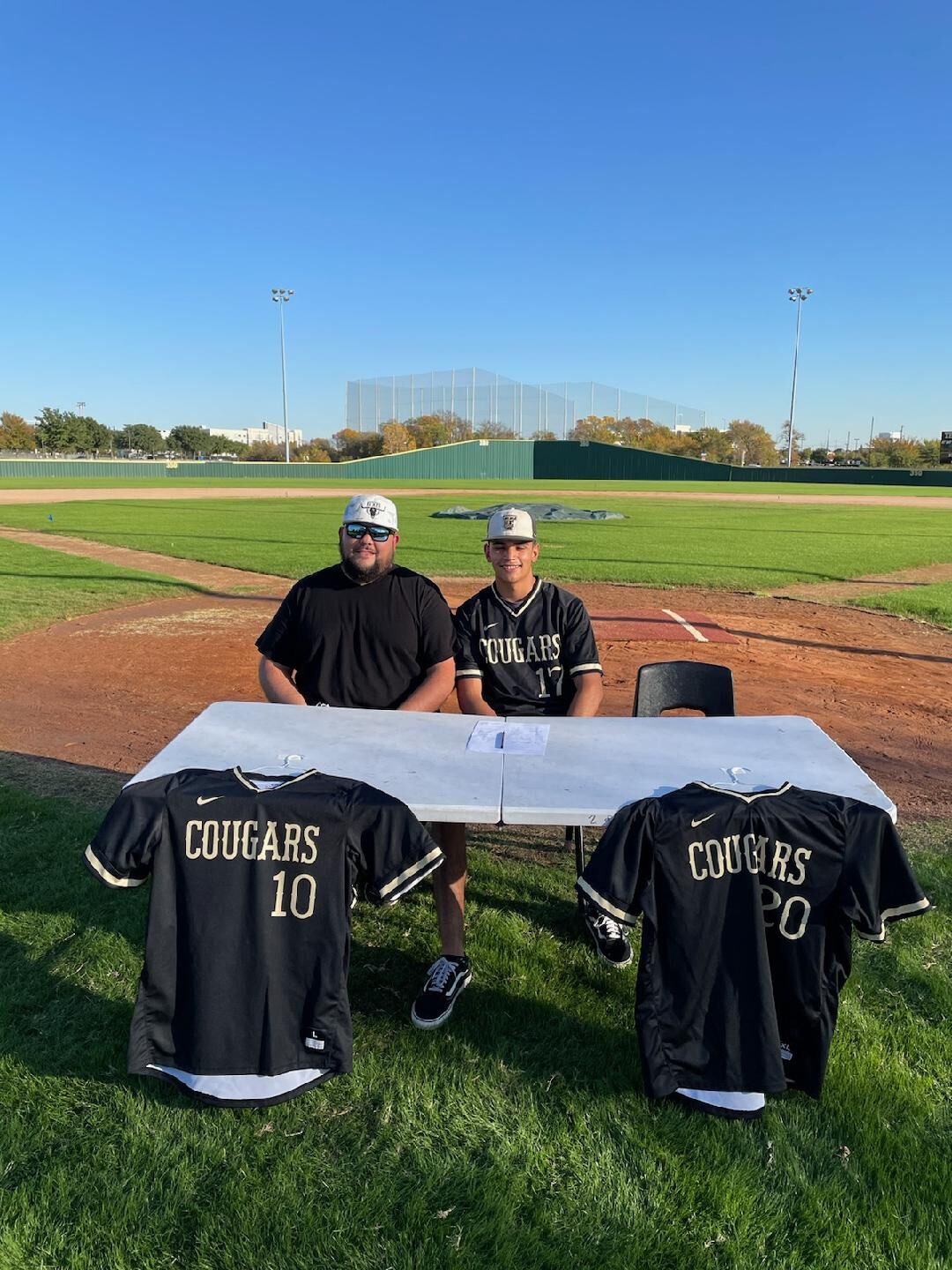 The Colony senior Tay Mosher signed his National Letter of Intent to play men's basketball for East Carolina University on Wednesday. Accompanying him are his parents Joe and Susan.

The Colony senior Noah Witham signs with Dallas Baptist University on Wednesday for cross country and track and field.

Accompanied by his family, The Colony senior Ryan Scott signs his letter of intent to play baseball for Dallas Baptist University

Nine student-athletes from The Colony signed their National Letter of Intent on Wednesday, the first day for the early signing period.

The Colony’s baseball team got a little creative with the location for their five signees. Head coach Martin Dean set up the ceremony behind home plate.

Senior outfielder Ryan Scott has been one of the top hitters for the Cougars during his first three seasons, finishing a pandemic-shortened junior season with a whopping .556 batting average to go along with 10 stolen bases.

Irwin brings multiple years of varsity experience at the high school level to Hesston College and is expected to be a big contributor on the mound next spring for The Colony. Reyna had one of the best statistical seasons in all of Class 5A last season, allowing just one earned run in 17 innings for a 0.42 ERA. Brown, who will graduate in December, stole 11 bases and finished with a .382 batting average last spring in his final season at The Colony. Robinson, a Creekview transfer, is expected to pitch for the Cougars in 2021 before moving on to college.

“Ryan was good when he got here,” Dean said. “Cade has a lot of experience. Devin has just improved and improved. Chase will play for McLennan in the spring. We didn’t get much of a chance to see Dante last season.”

Like Reyna, Goldy has been a model of improvement. She has increased her batting average every year, finishing her junior season with a .333 batting average and 14 RBI in 19 games. Goldy was a member of the Lady Cougars’ 2019 squad that was a semifinalist in the state tournament.

Mosher, meanwhile, received the shipment of East Carolina shirts and face masks in the mail two days prior to his signing ceremony.

The senior forward, a four-year starter who has earned all-district honors in each of his first three seasons at The Colony, said that it is “definitely nerve-racking” to move out of state. But, basketball is his life. He’s ready to help an East Carolina team that shot just 28.1% on 3-point attempts last season. Mosher has averaged 12 points and six rebounds per game in his high school career.

“I'm just happy to have this opportunity,” he said. “I want to make the most of it. I feel like that I can go in there and make a big impact. Over the years, they've struggled with 3-point shooting. That's what I specialize in.”

The Colony head cross country/track and field coach Tony Doran said Merrill and Witham have been tremendous assets to their program over the last four years.

Merrill has ran on varsity since her sophomore season and was a regional qualifier both her sophomore and junior seasons, all while balancing time between athletics and school band.

“I gave a good praise to Carmen because we'd always talk about how athletes can't do two things at the same time and have a good career in both,” Doran said. “Carmen has been in band and cross country all four years. Her and I and the band director have always been able to work together. That's a testament to her hard work and dedication for doing it for four years.”

Witham, meanwhile, has battled through foot and ankle injuries and was a regional qualifier for The Colony’s cross country team his junior season.

“With him, he's a tall kid,” Doran said. “He's really growing into his body right now.”