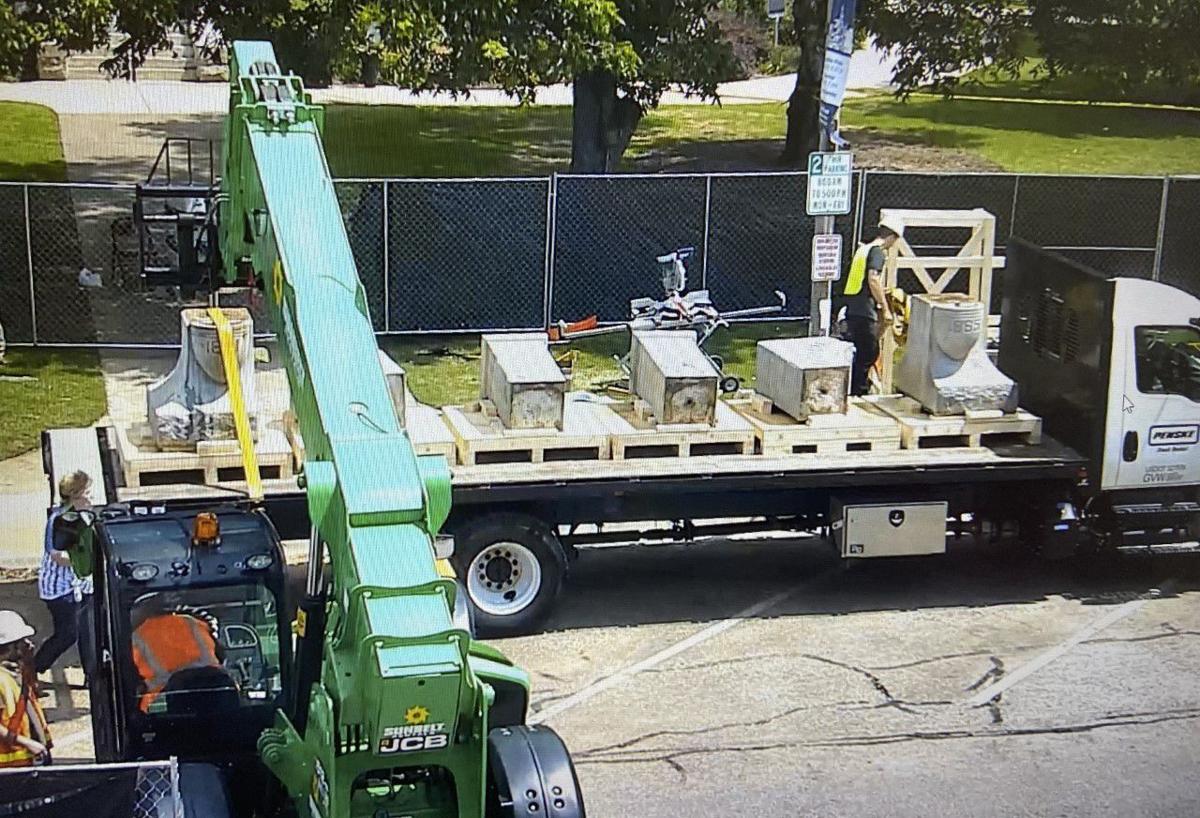 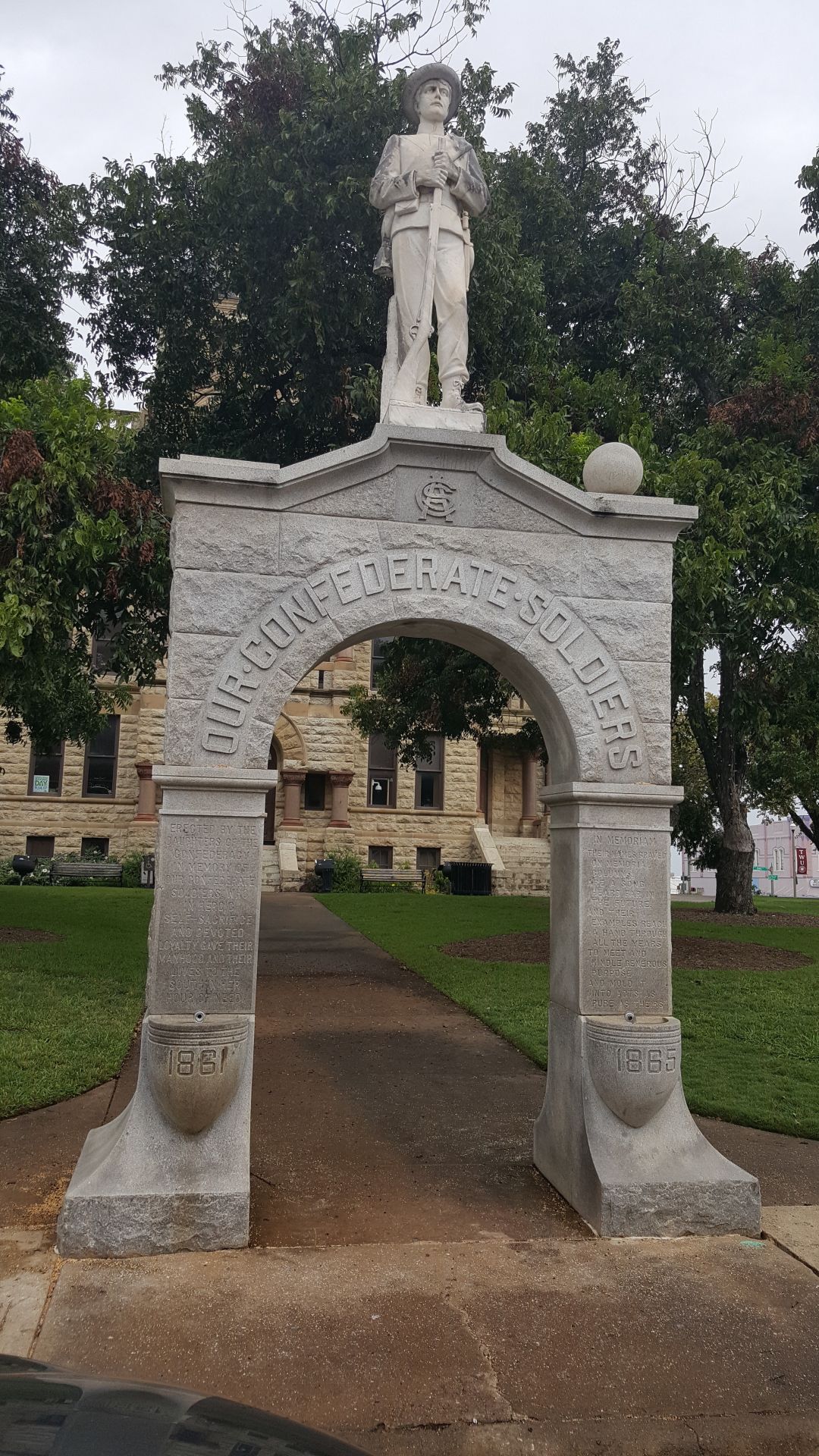 The Denton County Confederate Soldier Memorial had been in place in Denton since 1918.

The Denton County Confederate Soldier Memorial had been in place in Denton since 1918.

Removal of the Confederate Memorial on the property around the Denton County Courthouse-on-the-Square began early Thursday morning and was completed in just under 10 hours.

The Confederate Memorial, removed for public safety reasons, is now in county storage.

In the coming months, the Denton County Courthouse-on-the-Square Art Committee will reconvene to review options on where to display the Confederate Memorial. The committee will recommend historical context to tell the history of slavery in America and its causal impact on the Civil War as well as a description of the African American experience related to the legacy of the Civil War at the time of the memorial’s initial construction in 1918.

Recommendations from the Art Committee will go before the Denton County Commissioners Court for consideration and, upon court approval, forwarded to the Texas Historical Commission for final approval within the next year as outlined by the commission’s request.

On June 9, the Denton County Commissioners Court voted unanimously to remove and relocate the 102-year-old granite Confederate Memorial from the south side of the Courthouse-on-the-Square lawn to be retained and re-interpreted for educational and historical purposes at another Denton County location under the direction of the Office of History and Culture and the Texas Historical Commission.

The decision was made after the Denton County Courthouse-on-the-Square Art Committee met on June 8 and recommended that removal and relocation should be the next step.

The Art Committee will continue its mission of adding context to the Memorial as the county works toward continuing the conversation about the Confederacy and slavery – to help ensure future generations learn from the problems of the past to create a brighter future.

“There is an overwhelming sense that the deep consciousness of America has been touched by recent events as demonstrated by civil unrest across the country and vandalism and destruction of statues and monuments representing the broad spectrum of American history,” said Denton County Judge Andy Eads.

“For over one hundred years, this memorial has stood next to the courthouse and meant many things to many different people. To some, it is a linkage to our past heritage and to others it is a symbol of oppression. We have tried hard to thread the needle between these views: to honor sacrifice while respecting the sensibilities of people who have approached the Denton County Commissioners Court in good faith. We intend to continue to do so.

“As we watched the news reports of other artifacts removed or destroyed across the nation, we came to believe the time had come for action - especially after the destruction of historical elements at our own state capitol, and closer to home when our All War Memorial on our courthouse lawn was desecrated,” Judge Eads said.

“Our collective decision is not one taken lightly. However, in weighing the potential for further harm to our businesses, potential for harm to anyone who might seek to destroy it and the law enforcement resources needed to protect it, we believe relocation is the right step,” he said.

“Today, this important step is to preserve both community peace and a piece of history.”

During a June 17 board meeting, the Texas Historical Commission asked Denton County to consider resubmitting the application with several provisions.

The Denton County Commissioners Court unanimously approved a resolution during the emergency meeting on June 18 to seek and obtain approval from the Texas Historical Commission Executive Committee for the relocation with the following provisions as requested by the Texas Historic Commission:

“We are pleased that the Texas Historical Commission unanimously agreed with Denton County on the necessity of our permit request. This is another step in an ongoing partnership with the THC. We welcomed their input and their requests were consistent with the plans the county already had in place and had publicly committed to. We also welcome their continued oversight of the memorial,” Judge Eads said. “In order to comply with the State Antiquities Code Application process, we believe it is important to follow their guidance in preserving history.”

The Texas Historical Commission, some of the most historically minded preservationists in the state, unanimously approved the state antiquities permit application submitted by the Denton County Commissioners Court following the Court’s emergency meeting on June 18 to draft a resolution as requested by the Commission.

Questions or suggestions by the public can be submitted by email to  ArtCommittee@dentoncounty.com.