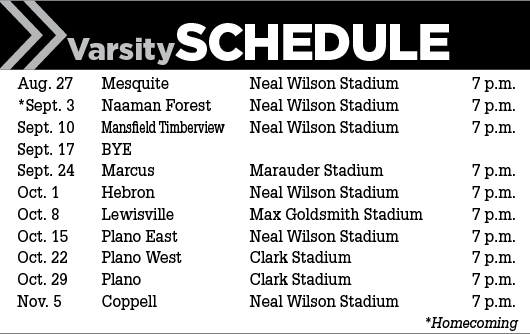 The Jaguars endured their share of peaks and valleys across an uneven district campaign in 2020, snapping a two-year string of playoff appearances after a 4-6 finish to the season.

At its best, Flower Mound conjured visions of the high-powered offenses of previous years — the Jaguars scored more than 60 points twice in district play. Four other times on its schedule, Flower Mound scored 14 points or less, while the Jaguar defense surrendered at least 50 points against three of 6-6A’s four playoff qualifiers.

With a bit more continuity in personnel and a traditional offseason, the Jaguars hope for a more consistent product this fall.

Flower Mound brings back six starters on offense, headlined by Florida commit Nick Evers at quarterback. The SEC-bound signal-caller made strides as his junior year progressed, ultimately throwing for more than 2,500 passing yards and 20 touchdowns on his way to an all-district first-team selection.

Although Evers’ top target will be playing elsewhere this season — senior Parker Clark transferred to Fort Worth All Saints — Flower Mound has plenty of experience back within its passing game. Senior Cade Edlein authored some big games late last season, junior Walker Mulkey caught more than 30 balls as a sophomore, and junior tight end Caden Jensen’s 6-foot-6 frame can be used in a variety of ways in the Jaguars’ spread attack.

Evers also has a familiar face joining him in the backfield with junior Peyton Porter primed to build off a productive sophomore year. The offensive line is anchored by senior Dylan Tighe.

Defensively, Flower Mound will lean on an experienced secondary led by senior Christian Claterbaugh, dubbed the “quarterback of the defense” by head coach Brian Basil, as well as junior Cooper Davis at cornerback. Senior Ryan Brubaker brings experience to the linebacker corps, while Basil and his staff will look to seniors Preston Lewis and Jake Rumsey to lead a defensive line that graduated every starter from last season.

Evers began generating buzz as a prospect well before taking his first snap on varsity last season. Although the Jaguars took some time to find their rhythm, Evers’ play improved as the year progressed — he threw for at least 298 yards in three of the Jaguars’ final four games on his way to 2,578 yards on the season. Verbally committed to Florida and ranked among the top quarterbacks in the state, Evers is locked in as the focal point for what projects to be an improved Flower Mound offense.